GIRakaCHEEZER said:
And something that simple wouldn't be very uboa-esque, would it?
Click to expand...

You're right.
1 out of 20 hearts being an uboa heart that either insta-kills you or deals 1 damage and drops nothing when you kill it is more uboa-esque.

Because GIR doesn't want to remember what was said in a chatroom.

All about the easy version.
You either have to do the Secret Missions, or be good enough at the game to make it through with three RAM.
In STARS, if you fall in most areas you start over.
The part with four blocks moving just above each other is particularly unforgiving, requiring several jumps, one of which is over such a gap, just to reach it from the nearest save.
Locking his house and keeping red flowers in his basement since 2004. 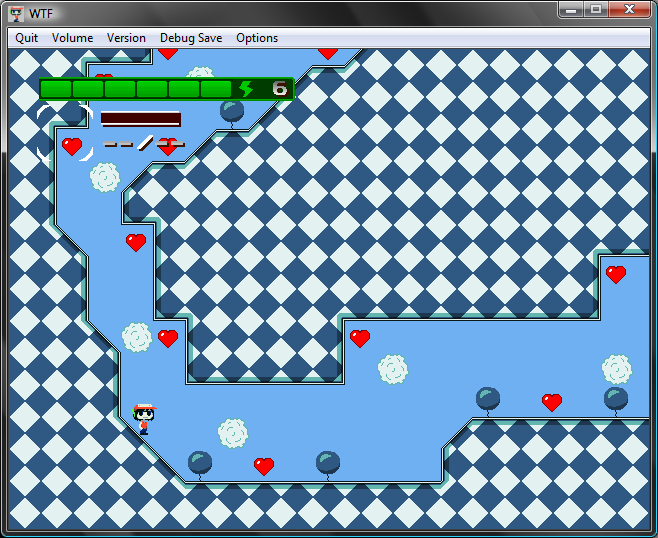 Here's a pic of what chapter 6 is going to look like.

I have a minor hunch as to how that area will work. Otherwise the chapter theme looks interesting

I think you had thought that scene would be a good idea at first but later on decided to dump it.

I was hoping for some kind of spike jump + healing area
I'm an admin c:

It was hard, but AWESOME!!!

A game developer who's game revolves around the concept of randomness is not in a position to make April Fools jokes.
Only to make disappointments


cultr1 said:
A game developer who's game revolves around the concept of randomness is not in a position to make April Fools jokes.
Only to make disappointments

I'm glad to see this joke is fooling more people than I thought it would.

And I'm sure you'll play it when v 0.5 comes out, provided your computer can handle it (mac user).

I love how any random thing about the automatically generated panel containing your post is longer than the post itself.
I'm afraid your path ends here, because the world cannot rely on you.
Sep 5, 2011 at 4:22 AM

I've been playing this. Hard, but not brutally so, but I am probably a below average-average player so I had to grind a few areas a couple of times. I managed to miss the missile launcher despite the warnings, but I am surviving without it nonetheless. Secret area 4 is one of those "catastrophically annoying" jumpapalooza. I manage to make progress on each reload, so I still have hope I can make it through.

This is climbing my ranks of favorite mods. There are some mods that difficulty curve properly, albeit presenting a well thought out challenge. Yours is one of them. There are the more common mods that are easy to breeze through, but then the difficulty level quickly ramps up to "yeah right" proportions, often in conjunction with a bad save location that inspires a useless journey TO the puzzle/fight, rather than AT the beginning of the puzzle/fight. The extra time it takes walking becomes annoying quickly and I abandon the mod. Not yours though, you stick me right back in the action and I have to give it just one more try, which becomes half an hour and 10 more.

Thanks for the feedback. In the most current version I have tried to make some of the more difficult parts a bit easier (due to the masses crying out against said parts).

Also on an unrelated note, Version 0.5 will be released 1 week from now (September 12).

Making the difficult parts easier? I'm playing on the regular mode and again I am a below average player. I am also incredibly dense in that I missed the missiles even though I had a hunch on how to get them (don't make it required later is all I'm saying

) but I have beaten all secret levels up to 4 (I am in Stars right now) and am at the part
where I ride the railtanks. That'll be a doozy.
The parts are difficult, frustratingly so at times. But I am able to grind through them and when I do, I don't get so much as a "finally, that part's over, now onto the rest of the game" as much of a triumphant feeling of finally defeating such an evil, though fun puzzle. I haven't played WTF easy but am assuming it is...easier I guess. I don't know if I would get that same triumphant feeling if I didn't have to die 40 times before finally getting the point of the challenge and completing it.

The biggest connection I can make with successful vs unsuccessful is secret mission 3. Ingenious use of that heart box effect. But that mission can be seen as very, very difficult to people not great at pixel-perfect jump puzzles. But it is optional and you start right at the beginning each time, and the reward (1gb) is hard to pass up. Kind of like difficulty now will make the rest of the game easier, so the motivation there is outstanding to grind through it.

Towers mod has the same type of jumping puzzle, "destroyed space." That is, I assume, part of the plot to get forward, requires pixel-perfect jumping, and has a considerable walk from the save point to the challenge itself. It gets tedious and I just don't feel all that motivated to go back to it again and again.

Edit: Couple of missed commas in the script starting halfway through Chapter 3 and throughout chapter 4. Check it out if you desire. Also,
curly
says "what is you name" or something to that extent. Those being the only typos I could find in the entire thing is already 90% better than the competition.

Part of the reason it's been on page 2 for a while is that it has been over a year since the release of version 0.4. Also the secret missions are optional, so they're not what I adjusted.

And I'll look into those grammatical errors, but I probably won't be able to spot most of them.