After you find kazuma and sue is let out of the cage and they go to the assembly hall, sue just keeps walking until she hits a wall and the animation keeps going

When destroying blocks with the grapple hook, it extends the hook's model by however many blocks it can keep destroying.

"Officially Worth 1 Rupee"
Join Date: Jul 31, 2012
Location:
Posts: 1
Hi, I started playing your mod few days ago, ang I noticed a bug that's quite annoying :
- Star Blocks can only be broke on their right side (from middle to the right of the block) when you shoot at them from above or from below. I think it happens only when there are solid blocks on the left.

I stopped playing at the Catacombs (because it's soooo long, it took me like six hours or more to reach Kazuma).

I didn't noticed any chest or NPC that gives you the "Map System", and I would know if we can obtain it before or after the Catacombs. (It's still a bit hard to find your way in huge maps ^^)

I also noticed that the "Autohacker" is useless since after compteting the Bushlands we can't get back to Egg Corridor in order to enable the password protected computer. (I guess the "Autohacker" will be useful later in the game :] )
Aug 1, 2012 at 6:55 PM

"I, Ikachan. The Life and Documentary of the OrigiNAL SQuiD."
Join Date: Dec 28, 2010
Location: No-Sleepsville
Posts: 151
Age: 25
Found a couple of things...
1) In the sprinkler storage room in the farm area, one of the lockers seems a bit further out from the rest. It's weird and I don't like it.
2) After talking to Kanpachi twice, I died and went back to my last save, which was before visiting Kanpachi. Instead of saying his first line again like he should, he just said his second line about the locket.
3) Is there a way to get back to the first life capsule in the Upper Antron (the one above the disappearing platforms)?

That's all I have now, but I'm not that far into the game yet.
i still float around here occasionally. i guess. i barely know anyone here anymore
Aug 9, 2012 at 12:31 PM

In the Egg Corridor around eggs 05 and 06, the doritos seem to either fall behind platforms that you can't fall behind or float above platforms where you can't stand either. WTF is with that?
i still float around here occasionally. i guess. i barely know anyone here anymore
Aug 11, 2012 at 6:31 AM

I am playing this beginning and it is not so bad. Because background look better than regular.
Aug 23, 2012 at 4:48 PM

EDIT: Oh! And I don't know what everyone else is doing, because I haven't found a single bug yet. But I'll report back if I do.

EDIT 2: Now up to the part where Kazuma/Sue are reunited and the gang has moved off to the assembly hall. No bugs discovered. But when you go back to tighten up the bolts, could you please correct the typos in the dialog?

"would of/should of" etc = it's a common mistake, but "would of" is grammatically incorrect. The term you're thinking of is "would've", which is a compound of "would" and "have".

In short, change all those to "would have" or "would've".

And a mimiga's nose is "sensative" = "sensitive".

"I, Ikachan. The Life and Documentary of the OrigiNAL SQuiD."
Join Date: Dec 28, 2010
Location: No-Sleepsville
Posts: 151
Age: 25
OK, I've beaten Igor now after trying to finish the Egg Corridor for ages, how do you get out of the place and get back to the Mimiga Village? Does it have anything to do with the odd gate at the far left of the Masser area, or do you have to attempt to ride beetles and jump back up to the previous area?

edit: nevermind, found it.
i still float around here occasionally. i guess. i barely know anyone here anymore
Sep 22, 2012 at 9:58 AM

"I, Ikachan. The Life and Documentary of the OrigiNAL SQuiD."
Join Date: Dec 28, 2010
Location: No-Sleepsville
Posts: 151
Age: 25
I have 15 health at the moment and it seems impossible to beat the bat swarm, are there other life capsules I'm missing (AKA are the two out-of-reach ones in the egg corridor actually reachable)?

edit: I died, but then I died again two seconds later (as in before the "you died" message shows) against the swarm just now. 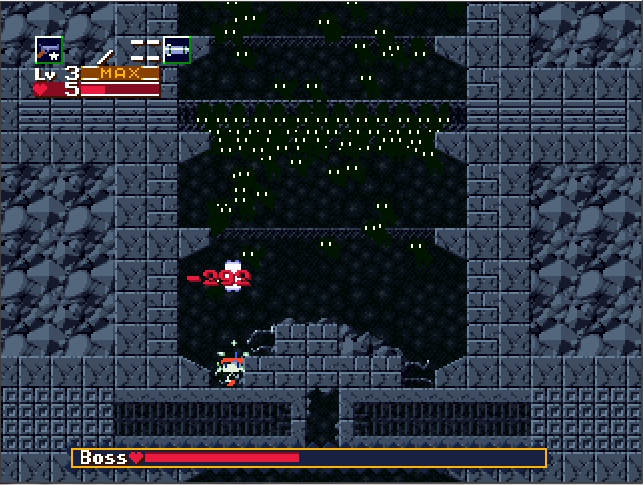 It went to 500 before it stopped, but the bat just wouldn't die!! wtf is with that!
i still float around here occasionally. i guess. i barely know anyone here anymore
Sep 22, 2012 at 9:47 PM
C
Carrotlord
Not anymore

Carrotlord said:
Dubby, I know you haven't posted in a while but when are these bugs going to be fixed? When I tried this mod a couple of months ago it was unplayable because there were just too many bugs.
Click to expand...

I don't know what I'm doing compared to everyone else, because I made it to the end of the demo with no game breaking glitches.
Oct 29, 2012 at 10:08 PM
P
PixelVortex
Senior Member

-Certain things point to false difficulty (e.g lack of save points, those blocks that look normal until you step on them). I like the idea behind the blocks and I think some awesome stuff could be done with them, but right now they just seem annoying. It is fairly annoying having to constantly re-do sections of platforming I have just done because the floor fell beneath me. There is no way of telling where they are so it just leads to trial and error.

-The complicated levels are fun. I feel like I'm playing Metroid having to explore these massive mazes with interesting design.

-I like that there are lots of secrets and hidden areas, and the fact that I have to look around and explore to progress instead of following a scripted straight line of boringness.

-I find the whole idea of the mod cool, redesigning Cave Story. This is good because it gives players familiarity but still allows the mod to be interesting and not suffer from awkward stories and characters acting out of role like most other Cave Story mods.

-By looking through the data I can see that lots of stuff has been added which is great, especially considering most mods are just single levels usually with no new content, but with this there's new bosses, tilesets, enemies, game mechanics etc.


So far the mod looks awesome probably the best Cave Story mod I've seen. Can't wait to see future updates and if you have to only fix one thing please just add more save points.

"Run, rabbit run. Dig that hole, forget the sun."
Join Date: Jan 28, 2010
Location: Internet
Posts: 1369
Age: 32
I swear there are still bugs. I once thought this was the worst mod ever made - even worse than Super Nito Street Journey or whatever... simply because there were so many bugs that could screw up your save file permanently.

It's a lot better now. This mod is a good one. But as long as it has severe bugs, it will never ever compete with WTF Story, Schism, King: Strife/Sacrifice, The Untold Story, The Show, or any other mod.
Oct 30, 2012 at 12:22 AM

Maybe you intended the latter part of your post as a warning, so you'd be taken for srs ("If u dunt folo my advice ur mod will SUUUCK!!!"), but all it really did was invalidate your point and make you come across as a douche. Maybe bugs are the thing you care about more than anything else, but Dubby has great level design and shows a talent for things that actually matter, and honestly, I consider Redesign better than most of the mods you mentioned.

Lastly, you seem to think that repeating your opinion every few posts will make Dubby pay more attention to it. You already said that there are a lot of bugs and that that bothers you, and I'm sure Dubby has the ability to read something you posted fourteen inches upwards.

Yeah. Please just stop. You've been acting pretty stuck up recently (and I am not alone in that opinion), and it isn't pleasant for anybody else. You are not God's gift to modders.

Quit pretending to be.

It's in my own opinion that bugs are fixable, and an actually bad mod can't have much done with it. This mod is one of my favorites out there because of it's good design and level flow. I'm upset by the fact that dubby hasn't been around and probably isn't working on it.
Oct 30, 2012 at 4:11 AM
C
Carrotlord
Not anymore

EDIT: Are you also seriously saying that this mod, the Redesign mod, of all mods, is actually better than The Show, WTF Story, King's Story, and Schism? What? Huh? These are the best mods on the forum for sure. There is no way a simple modification of Cave Story that barely uses custom graphics and barely makes good use of way too many ASM hacks could be that highly rated. Lace, you are going insane I believe. You are in danger... deep danger.
You must log in or register to reply here.
Share:
Reddit Pinterest Tumblr WhatsApp Email Share Link
Top