"Life begins and ends with Nu."
Join Date: Aug 28, 2009
Location: The Purple Zone
Posts: 5998
the new map feature works fine
but some people have reported issues if you make a large # of maps
I haven't had time to figure out how to fix it

"Fresh from the Bakery"
Join Date: Oct 7, 2014
Location: Space
Posts: 3
I do apologize if this has already been answered, but after searching through the thread (at least with the search function with stuff like tile, Cave Story+ (doesn't recognize the + for some reason), map, stage, etc.), and even tried to Google the following problem, I'll assume it hasn't come up, yet.

I want to mess about and try to edit the levels in Cave Story+ (on Steam), so I've looked for Level Editors like Cave Editor (which crashes upon loading the .exe file) and, well, Booster's Lab! There seems to be a lot of stuff that I can experiment with, which is a nice start. However, there is one problem. When I load up a map from the stage.tbl file...

Everything is a horrifying mess.

And this applies to every single map. Obviously something that's not supposed to happen, but when I heard other people mention Cave Story+ and nothing about having something like this, that worries me.

I had the Booster's Lab as a folder within the game folder (since I assume the game doesn't detect it and it's just a handy-dandy shortcut for file navigation with the program), and then I tried to move it to the Desktop; neither fixed the problem.

I hope this isn't a very rare unsolvable case.

Aar said:
Did you load "stage.tbl" instead of the exe
Click to expand...

Now, going through each download link in the OP (so I can't try 2.5.1, sadly), anything that is 0.3.x.x has the same issue. I had to go downgrade to 0.2.4.0 before it stopped being broken; sad thing is, that's quite a fall for nearly an entire 0.x, so none of the nice bits like having any number of entities, copy and pasting them, and such (at least when glancing at the changelogs). Hopefully they won't bother me that much!

Didn't see that since I was typing up my post and downloading older versions, will try that now!

Edit: It actually works! Though, the entities looked weird, but I just had to change the Entity Resolution to 32 as well. Thank you, Cheezer!

"Life begins and ends with Nu."
Join Date: Jan 13, 2011
Location: Lasagna
Posts: 4481
Has anyone commented about the scriptsource folder yet? I'm not sure exactly what it's used for, but I guess bl reads from it instead of its equivalent .tsc if it exists? The problem is that if you edit maps in ce and then go do stuff in bl, the new tsc gets overwritten because the files in scriptsource aren't changed. It's easy to just delete the folder to protect your new scripts, but I just thought I'd point it out since it might fuck up newer modders.
EDIT : USER WAS WARNED FOR THIS POST
Oct 19, 2014 at 6:29 AM 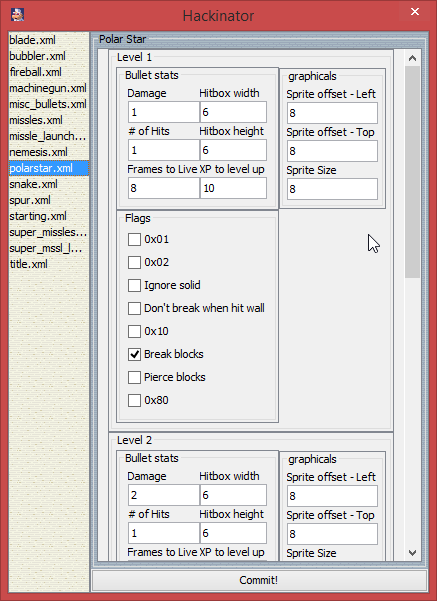 This big feature bumps the version number to 0.4.0.0
Please test it out when I post it and let me know if it works. I can't be bothered to. You can even try making your own hacks but, I don't have any documentation about that yet and you could fuck things up doing that even easier than usual. I'd recommend working on a backup to try that out.

Nobody came to tell me how BL isn't working for them so I'll just have to assume it's 100% their fault and not bother to do anything about it.
[still later]
https://dl.dropboxusercontent.com/u/42853625/Permanent/BoostLab_0400.zip
http://noxid.ca/files/BoostLab_0400.zip

Still don't know what caused this, but downloading a clean pre-patched version has solved it. I fiddled around briefly with the Polar Star and it appeared to work fine, or at least didn't break.
I'm an admin c:

"Life begins and ends with Nu."
Join Date: Aug 28, 2009
Location: The Purple Zone
Posts: 5998
Yeah idk what the deal with that is. It looks like the wrong spritesheet got set for the weapons.

"What're YOU lookin' at?"
Join Date: Jan 18, 2013
Location: Somewhere quiet with many birds
Posts: 1118
Age: 23
Congrats on getting the hackinator up and running, Noxid! I may not be able to test it, but it seems pretty convenient. And you're getting a decent amount of support so far, which is good. ~w~
★Hi! I'm a signature. Times are scary, but remember, even some cyberpunk stories have good endings! Do whatever you can to keep yourself going forward, in some style, with some good spirits, helping where you can~!★

"Life begins and ends with Nu."
Join Date: Aug 28, 2009
Location: The Purple Zone
Posts: 5998
It took way longer than it should've but at last, dreams are finally becoming real

the hackinator is pretty much gonna be as good as you guys make it since I don't really have the motivation to throw a whole lot of stuff into it beyond what's there to mirror CE's functionality. But there's a lot of potential.

"Life begins and ends with Nu."
Join Date: May 28, 2008
Location: PMMM MMO
Posts: 3713
Age: 30
When are we gonna get an exe for launching the editor? It's not that hard (it's literally the easiest thing) and it would save a lot of headache for some people, especially those who have to launch it via the command line for some reason.

GIRakaCHEEZER said:
It's not that hard (it's literally the easiest thing)
Click to expand...

I tried it once. It increases the filesize of the .zip file by a substantial amount. The best option is to have an exe check if the Java RTE is installed (check the registry). If it isn't installed then show a confirm box, run the lightweight online installer (download+install) for the Java RTE, listen for when it finishes (closes) and then launch BL. If it is installed then simply launch BL.

andwhyisit said:
I tried it once. It increases the filesize of the .zip file by a substantial amount. The best option is to have an exe check if the Java RTE is installed (check the registry). If it isn't installed then show a confirm box, run the lightweight online installer (download+install) for the Java RTE, listen for when it finishes (closes) and then launch BL. If it is installed then simply launch BL.
Click to expand...

The best thing to do is use Launch4j (http://launch4j.sourceforge.net/) since it does everything for you, including checking for the appropriate JRE. Also it's best to not pack the jar into the exe since that seems to trigger some antiviruses.

(It happens upon closing and reopening BL after it being maximized)