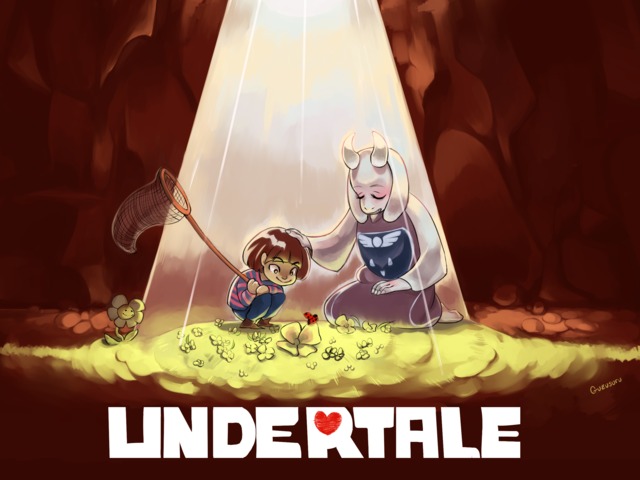 ​
​
Summary: It's an RPG-style game where you take on the role of a young (purposefully androgynous) child in a world where monsters and humans once lived together, but monsterkind was eventually driven underground. The protag dares to venture up to a mountain where nobody is said to return from: they fall into a hole and the journey begins from there.

Visuals: The aesthetics and overall feel of the game are heavily informed by Earthbound, Mother 3 and OFF, and it's readily apparent right out the gate if that's your sort of thing (including a very obvious OFF tribute in the demo). The sprites are actually quite charming and have a lot of personality despite their simplicity. It's one of those games where there's a lot of color splash on monochrome.

Gameplay: Ok, so the battle system doesn't completely re-invent the wheel, but it's interesting. When you encounter a foe you can either choose to engage it in a hostile way or you can interact with it in some kind of friendly, diplomatic way (and then selecting "Show Mercy"). Every monster type has its own "personality" and you'll have to figure out how to get it to be agreeable with you in order for it to back down. Roughly speaking, there's an "attack round" (you can engage hostile, friendly or escape) and a "defense round". In the defense round, you have a cursor that you have to move around to avoid projectiles, in the style of a bullet-hell. How much the enemy damages you depends on how many projectiles end up hitting you. Every enemy's projectiles move in different ways too.

Oh, and I guess it looks like it's setting up to have a lot of puzzles in it even though the puzzles in the demo are very simple and obviously there for demonstration purposes.

Story/Narrative: Is astoundingly good and shows a shocking amount of promise for what appears to be about a ten-minute demo. There are a -ton- of endings you can get, and it's a case where the programmer literally thought of everything.

I'm not sure how much I can say without spoiling the experience, but I will say that this aspect is the one that shines through and it pretty much grabbed me by the balls unlike any other game demo I've ever played through. If I'm to give a hint about what to do...


Play through the game multiple times: The game and the characters in it recognize that you've played through it before and remember what you've done and their dialog changes accordingly. Do pacifist or semi-pacifist runs to start. When you feel like you're done replaying the demo, shoot for the worst ending possible (kill everything and everyone -- yes, the "random encounters" aren't infinite). Then let what occurs after that sink in. Go to the start menu as if you were going to replay again. Leave your computer behind and go lay on the floor for a while in a fetal position.
Mar 18, 2014 at 1:27 PM

"What're YOU lookin' at?"
Join Date: Jan 18, 2013
Location: Somewhere quiet with many birds
Posts: 1120
Age: 22
Looks really interesting...I probably couldn't handle the "kill everything" route, though, whatever it is. Going for the merciful route for me :>

I'm glad it got its goal reached...I'll download and play the demo whenever I can. Thanks for sharing, Dinny!

★Hi! I'm a signature. Times are scary, but remember, even some cyberpunk stories have good endings! Do whatever you can to keep yourself going forward, in some style, with some good spirits, helping where you can~!★

"Big Joe Tire and Battery Restaurant! Opening Soon! Eat at Big Joes!"
Join Date: Jun 28, 2013
Location:
Posts: 521
Oh yeah, I liked this one when I played it. I also liked the music, especially the ghost fight theme. I only played through the demo once.

"The Ultimate Sword of Extraordinary Magnitude"
Join Date: Jan 24, 2014
Location: Polar✪
Posts: 298
Just beat the demo, and daaaaaaaaamn, it's an excellent game. Can't wait for the full game to release.

"This is the greatest handgun ever made! You have to ask yourself, do I feel lucky?"
Join Date: Nov 23, 2012
Location: uncomfortable
Posts: 106
Watched a video

Pretty cool story, and it has a sense of humor
tumblr fuck: http://lithiumalkali.tumblr.com/ (my main) https://domicilehell.tumblr.com/ (art blog)
deviantart: http://2c00lraditz.deviantart.com
if you wanna message/follow me on DA pls do. i'm more active on tumblr though
Mar 19, 2014 at 1:22 AM

"Life begins and ends with Nu."
Join Date: Jun 27, 2013
Location:
Posts: 2635
Age: 27
Played the demo and I'm impressed. All I can say is sorta has this Yume Nikki feeling in it (creepiness in some parts, player character's closed eyes). And I'm excited for the game's release.

"The Ultimate Sword of Extraordinary Magnitude"
Join Date: Jan 24, 2014
Location: Polar✪
Posts: 298
(Warning: Title/Video Art is a Spoiler of the game, play it first) This Song is pretty damn awesome. I love the way they mix proper instruments and retro-style music seemlessly. It sounds great and feels great.

PolarStarGames said:
(Warning: Title/Video Art is a Spoiler of the game, play it first) This Song is pretty damn awesome. I love the way they mix proper instruments and retro-style music seemlessly. It sounds great and feels great.
Click to expand...

Ooooh yeah, one of the best tracks from the demo and it whets my appetite to what's going to be in the full release.

"Life begins and ends with Nu."
Join Date: May 28, 2008
Location: PMMM MMO
Posts: 3712
Age: 29
I played it, it was pretty great. I'm definitely looking forward to its release now. Especially because it will have more music.

"All your forum are belong to us!"
Join Date: Jun 12, 2009
Location: Dracula's Castle
Posts: 570
Age: 29
I saw this and I've been wanting to play it but I'm not sure if I should hold off for the full game or start with the demo.
It seems like some heavy spoiler-worthy stuff happens, so I feel like that might have more impact if I can play the whole game in the same run I'm discovering everything.
Mar 19, 2014 at 5:17 PM

Yakkers said:
I saw this and I've been wanting to play it but I'm not sure if I should hold off for the full game or start with the demo.
It seems like some heavy spoiler-worthy stuff happens, so I feel like that might have more impact if I can play the whole game in the same run I'm discovering everything.
Click to expand...

The Demo is maybe 40 minutes long on your first run, and I would assume the full game would be much, MUCH longer, since it's an RPG and all that. So if you don't mind spoiling a very small amount of the eventual full game, play the demo, but if you want the ~full experience, you should wait.

Yakkers said:
I saw this and I've been wanting to play it but I'm not sure if I should hold off for the full game or start with the demo.
It seems like some heavy spoiler-worthy stuff happens, so I feel like that might have more impact if I can play the whole game in the same run I'm discovering everything.
Click to expand...

I'd say go for it. The nice thing about this demo, and why I think it works so well/has stuck with a lot of people is that the demo's story is almost like a self-contained story, or rather it's somewhat complete on its own. That and I don't think it really spoils anything that will have an impact later on in the game, although I could be wrong about that (only time will tell).

"Heavy swords for sale. Suitable for most RPG Protagonists. Apply now!"
Join Date: Dec 26, 2007
Location: Lithuania
Posts: 1947
why are there mimigas with horns in this game.

"Big Joe Tire and Battery Restaurant! Opening Soon! Eat at Big Joes!"
Join Date: Oct 6, 2013
Location: Absent
Posts: 492
Age: 21
Something about this game reminds me of this, which is probably the main reason I like it so much.
The amount of awareness and thought put into the game's story is just amazing, not to mention the dark turn the story can take, and it really has the player think through their actions if they want the best ending.
It's a really thought provoking experience, and once you're done playing it, you get a much better insight to what kind of mentality you play with in video games.
YouTube | Steam |
Mar 19, 2014 at 8:39 PM
Z
ZarroTsu
Been here way too long...

I made this because I was obsessed with this song.

"Huzzah!"
Join Date: Jan 2, 2013
Location:
Posts: 201
Age: 23
This game demo is so fun!!!
Can't wait for the full game---More decisions to make the total gameplay time to be enormous!(I'm guesstimating it to be 10 days.)
Goodbye
You must log in or register to reply here.
Share:
Reddit Pinterest Tumblr WhatsApp Email Share Link
Top