new law that will prohibit the streaming of games if passed.

"Heavy swords for sale. Suitable for most RPG Protagonists. Apply now!"
Join Date: Dec 26, 2007
Location: Lithuania
Posts: 1947
I think the government has more important things to do than to waste valuable time and money trying to catch teenagers that download music from the pirate bay.

"Wahoo! Upgrade!"
Join Date: Apr 5, 2011
Location: The Null Void
Posts: 54
Well, SOPA was going to go to vote on Thursday (December 15). But through a series of derailments has been (probably) delayed until after congress gets back from the holiday break.

"Bleep, Bloop, Bleep, Bloop"
Join Date: Jun 12, 2009
Location: Edge of the universe
Posts: 1596
Sexpy scared the shit out of me and said it passed. I've been pretty mellow about this and put it in the back of my mind, but I recently just thought about how ridiculous it will be if it passes.

I want to get it over with too.

On the other hand this isn't necessarily a good thing. it was obvious all along that SOPA has serious holes when it comes to actually stopping piracy. This may well just be the next step in the censorship arms race between hollywood and the internet. The next slab of ice on the slippery slope as it were.

In order to fill the holes, more and more draconian methods will be required.

"This is the greatest handgun ever made! You have to ask yourself, do I feel lucky?"
Join Date: Oct 22, 2011
Location: The Plane of Dreams
Posts: 102
Which would be the end of the internet and the start of Government Control Information Browzing. What hell that would be. It won't pass or be very effective.
Life of life oh sweetest joy, death so very bitter...

I learn one thing today: donn't piss off your friend, or you miss out of a fun game.

It seems that I've become Imfamous here. I just wanted to be the funny guy of the forums. What a huge Mess I have made. Oh well, back to life.

So we've all heard about that weird-ass law being passed in the US. What are your opinions on it?

As for me, well, this picture explains it: 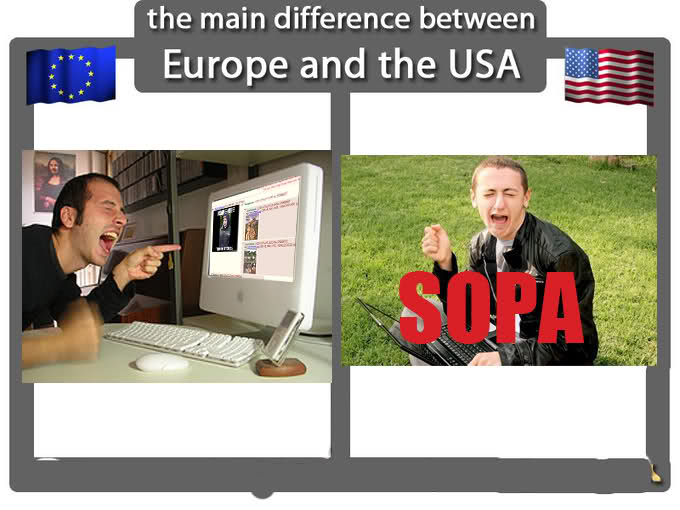 Well, we all know it is a poorly thought out law proposed by geezers who obviously are not in touch with the modern scene of reality. In other words, I want to puke up the proposer's severed ears in the retirement home they will soon live in.

Don't worry, though. I believe it's been postponed until next year for "further examination." The elderly are obviously a little slow with these things; maybe they didn't get the message we blasted in their ears.

We already have a thread for this, winner.

Also, that photo makes no sense, because 4chan doesn't have too much copyrighted material, just some reaction faces from da movies.
Also that's a British person in the right panel.
Dec 30, 2011 at 2:03 AM


cultr1 said:
We already have a thread for this, winner.

Also, that photo makes no sense, because 4chan doesn't have too much copyrighted material, just some reaction faces from da movies.
Also that's a British person in the right panel.
Click to expand...

You need to look at the big picture, not at the details.

The picture implies that Europe is better when it comes to censorship.

Germany is part of Europe, though. 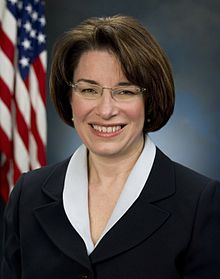 A wild congresswoman from Minnesota appears!

Heh, just a sad joke of mine. My favorite politican conservative *might* vote against SOPA. But things are not looking pretty.

"Life begins and ends with Nu."
Join Date: Aug 28, 2009
Location: The Purple Zone
Posts: 5998
I don't know. Would it be ironic if I knew anything about the anime industry to begin with?

"Life begins and ends with Nu."
Join Date: May 28, 2008
Location: PMMM MMO
Posts: 3713
Age: 30
I don't think the anime industry needs saving. Anyways today I saw (for the first time) something in support of SOPA:

Support The Daily WTF in Supporting the Support SOPA Movement It’s January 18, 2012 and, while most of the internet has decided to blackout their sites in opposition to the Stop Online Piracy Act (SOPA), we’re taking an opposite stance and are whiting-out The Daily WTF in support of SOPA supporters. If there’s one thing that SOPA proponents like myself and SOPA opponents can agree on, it’s that PROTECT-IP and the Stop Online Piracy Act have little to do with protecting intellectual property and stopping online piracy. After all, those who choose to steal creative works like the “I Have a Dream” speech from artists like Martin Luther King Jr. can already be sued and prosecuted under existing United States copyright laws. IP thieves living overseas can already be extradited to face justice in our federal courts. And the Department of Homeland Security can already arbitrarily seize domain names that fit its arbitrary standard of violating national something-or-other. While these laws will make such acts more illegal (and therefore reduce infringement), they’re doing something much, much more important: helping dismantle DNS and the internet as we know it. And that’s something that we firmly support and can stand by. You see, back in the day, if you wanted to get online and access electronically-stored information like digitized photographs, electronic bulletin boards, and informational databanks, there was only one thing you needed: a telephone number. You’d simply fire up your favorite telecommunications program (mine was Telix), have it dial that phone number, and after a refreshing symphony of beeps and hisses, you were online. Each phone number transported you to a quaint, peaceful community that was almost entirely self-sufficient. There was no “hyperlinking” between systems: you simply wrote down the phone number, signed-off of the current system, and then dialed into the new system. And let me tell you, there are few experiences in life that can parallel the utter bliss of discovering a new phone number and a new electronic resource. And then the Information Superhighway – and its tightly integrated Domain Name System – came along, decimating these peaceful, independent communities. The bulletin boards of old were ground up and churned in the giant “dot com” machine, leaving an interconnected web of domain names. There’s no more “going online” – you’re already online – and if you want to access an electronic resource, you can use a “domain name” like TheDailyWTF.com. Domain names are highly confusing in that they not only describe what the electronic resource is, but where it is as well. Nothing else in the world works like this for obvious reasons. Could you imagine the complete confusion in day-to-day things like getting a phone number? Is that “jenny eighty-six dot com” or “jenny eighty-six dot net”? We would be in complete chaos. SOPA and PROTECT-IP offer hope in returning to the golden age of telecommunications, and to the days before the Information Superhighway polluted the online culture with this domain name nonsense. Let the Domain Name System a natural death and prepare yourself for the Internet Protocol Number (IPN) renaissance. All you need to do is start a notebook that lists electronic resource names and their corresponding IPN. And let the first entry in your notebook be
The Daily WTF 74.50.110.120​
We can only hope that our legislators introduce common sense guidelines to ban HTTP (and HTML/JavaScript) as well so we can all return to the more sensible GOPHER standard.
Click to expand...

It's an interesting argument, to say the least. Even though the idea of eliminating the DNS system sounds appealing, I don't think SOPA would be the way to go about doing it though.
I'm not sure that I would want to go back to the old phone number system though, to be honest. Sounds like it would just break everything currently in place and be a pain.
[EDIT]: I love the oatmeal, and this is no exception (note: this is ontopic)

The line about the notebook at the end is the biggest hint.

Why you gotta go ruining my fun D: ?

"Life begins and ends with Nu."
Join Date: Apr 19, 2009
Location:
Posts: 3788
Age: 15
Sorry, but I wouldn't want young and impressionable members thinking he had some good ideas. Nostalgia's nice and all, but getting rid of HTML is too silly for that to be serious.
It did make me lol, however, so thanks for sharing. Also your gif that you edited in, that was funny too.

I think this is starting to get out of hand.. I know this sound crazy but this could lead to the end of the internet as we know it..
A world were you can only access certain sites the government will let you.

They want control over us even more? If this goes through then they've got it.

I know I sound like I'm preaching xD But it wouldn't surprise me the slightest.. you cant monitor the whole internet but you can if you designate what sites you can access.
Think about how much stuff goes under the radar that we share over the internet...

All in all i think this is much much deeper then just piracy, I think the whole file sharing thing is just a cover up, you need to look at the big picture in front of us.