"All your forum are belong to us!"
Join Date: Feb 2, 2013
Location: Canada
Posts: 621
Age: 27
Do you mean the singing voice synthesizer? I could've sworn it was also an anime as well. But no, I don't think I have a favourite vocaloid.

"Huzzah!"
Join Date: Nov 23, 2009
Location: ... I got nothin'
Posts: 219
Age: 34
Mine is SeeU, because her voice is from Dahee Kim (she's Korean), and I love Korean people and culture a little more than Japanese. Though my favorite RPGs and many of my favorite games come from Japan.. oh and I totally love Japanese anime.. and Japanese game shows. But yeah, definitely SeeU. However, I only like a few songs that I've seen/heard on youtube, and MMD usually freaks me out a little because they often dance too stiff, and it feels kinda horror-esque to me... creeeeepyyyy~
Nov 17, 2013 at 2:02 PM

"This is the greatest handgun ever made! You have to ask yourself, do I feel lucky?"
Join Date: Mar 28, 2013
Location: The Void
Posts: 114
Age: 20
I dont really like mmd either. Exept the funny ones :3. Anyway, my favorites are rin and len kagamine because they were the first ones i saw. And although it changes all the time, my favourite song is "road roller". Rin and Len become self aware and flatten the fourth wall along with everything else using their road roller.
Nov 17, 2013 at 3:30 PM

"This is the greatest handgun ever made! You have to ask yourself, do I feel lucky?"
Join Date: Mar 28, 2013
Location: The Void
Posts: 114
Age: 20
I haven't listened to po pi po yet. Prisoner is another one of my favorites. Does levan polka really count as vocaloid song?
A few more of my favorites are meltdown, alice human sacrifice, and judgement of corruption.
Nov 17, 2013 at 9:39 PM

"This is the greatest handgun ever made! You have to ask yourself, do I feel lucky?"
Join Date: Nov 23, 2012
Location: uncomfortable
Posts: 106
I love Alice of Human Sacrifice. Miku sounds nice.
tumblr fuck: http://lithiumalkali.tumblr.com/ (my main) https://domicilehell.tumblr.com/ (art blog)
deviantart: http://2c00lraditz.deviantart.com
if you wanna message/follow me on DA pls do. i'm more active on tumblr though
Nov 18, 2013 at 12:57 AM

"What is a man!? A miserable pile of secrets! But enough talk, have at you!"
Join Date: Apr 18, 2006
Location: Forever wandering the tower...!
Posts: 1770
Here's an older (dead) vocaloid topic you might browse :
http://www.cavestory.org/forums/threads/3080/
I posted some videos I liked in there that I liked...

I don't remember what got me into Vocaloid, maybe Rin's Kokoro; but now I really enjoy a good vocaloid music video.
Hard to pick a favorite. Miku gets most of the good songs, but Rin might be a personal favorite. Still I love it the most when a vocaloid song gets a nice fandub.
The music is just really different than anything you usually hear. Fun, fun...

Wish I had a PS3, then I'd get the new Project Diva F english game, and apparently there's going to be one for vita in english as well...

And here are two playlists I made while I was looking for good vocaloid videos :
Vocaloid playlist
Vocaloid 2nd list

@FrozenFire - MMD is pretty awesome... There are some really nice looking graphics these days. 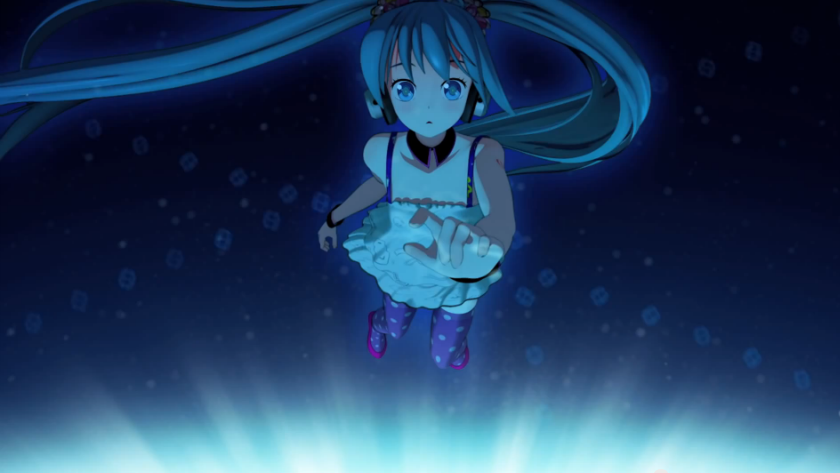 Of course if you watch the wrong MMD, I guess I could understand how you could be scarred for life

curlybrace22702 said:
I haven't listened to po pi po yet. Prisoner is another one of my favorites. Does levan polka really count as vocaloid song?
A few more of my favorites are meltdown, alice human sacrifice, and judgement of corruption.
Click to expand...

X-Calibar said:
@FrozenFire - MMD is pretty awesome... There are some really nice looking graphics these days.
Click to expand...

Hmm.. I guess the problem is that I've seen all the wrong ones, ha ha, and most of them are a few years old. But MMD never really was the problem, it was just how some people used it. I can imagine it takes quite a bit of work to get smooth and natural looking dance moves, so it's understandable that some people produced stiff animations.

Oh, I forgot to say that my favorite song remains Triple Baka, but it's probably just because I haven't taken the time to look for other good songs. Honestly though, about 90% of the time I can't stand how unnatural the vocals sound. My ears start screaming for mercy. It's not because it's bad music or anything, it's just that I personally don't enjoy the sound, and I do understand there are many other people who actually prefer the synthesized Vocaloid vocals over natural ones. Rather than Vocaloids, I almost always go for some J-rock or J-pop, like Kawada Mami, Yui, fripSide, LiSA, Flow, Kei Kamakura (he's got one song, but his voice is awesome), etc.

But yeah, I really do love Triple Baka though! :3
I just need to find a new song I love that has SeeU in it. ... sorry, I guess my love for Vocaloids is pretty narrow and limited. Oh! But I really like most of the character designs!

"This is the greatest handgun ever made! You have to ask yourself, do I feel lucky?"
Join Date: Mar 28, 2013
Location: The Void
Posts: 114
Age: 20
My new favorites are "worlds end dancehall" and "remote control". Also, I apologize for making a thread that already existed. I was not aware of this before I started this thread.
You must log in or register to reply here.
Share:
Reddit Pinterest Tumblr WhatsApp Email Share Link
Top