"Fresh from the Bakery"
Join Date: Jul 4, 2017
Location: Hell
Posts: 9
Age: 31
Woah! Didn't expect this to happen. I remember fondly liking the original mod and a 2x version with more content sounds awesome. Just the concept of a small CS mod constantly updating to add more content is kinda awesome, and I hope to see that fufilled. GG Aar, no re. I'll try this out in the meantime.

Played through the game and this is what I think:

For the most part of the beginning, it's really the same thing with some added polish. One thing I noticed is that the screen boundary teleport in the grassy area [forgot what it was called] still activates at the 4:3 boundaries instead of the 16:9 boundaries. Either this is a mistake or it's for speedrun purposes, I don't know. It just looks hella weird. Finding the Shotgun threw me for a loop as I was not expecting it at all. Another good thing is that the Fireball Boss Skip still works so I was able to get through the first boss quickly. I didn't expect the floor to drop though.

I like the shotgun jump mechanic. It took me a while to figure out but I put two and two together and figured it out. The last thing I did before writing this section was get the Spur. Holy oh my god yes, the fucking Spur. Thank the heavens. It was a little hard getting it, but a tip for others also having trouble: What I did was stand in front of the statue, jump, immediately start aiming down, and as I went up I spammed the everloving shit out of the Shotgun. It should give you just enough height to land on the ledge with the Spur chest.

Now from this point on, I'm writing this live as I play.

An ominous door. Let's see where this leads, shall we? 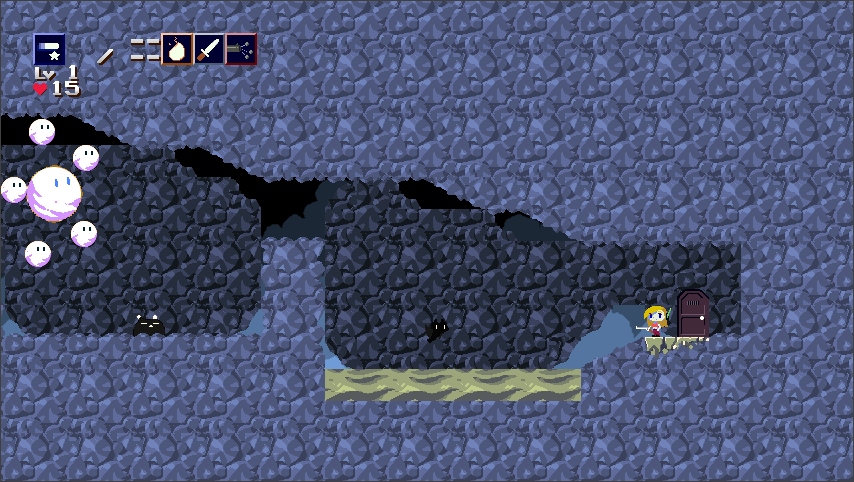 Oh. It leads to a room with those white annoying dipshits. Great. 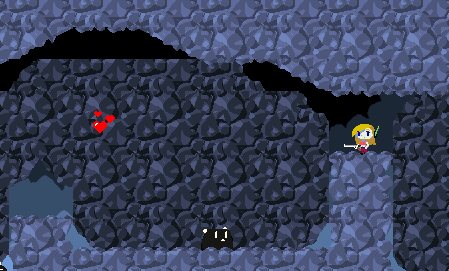 Nevermind, they're easy to take down with the Spur. 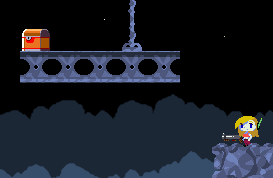 Chest? Chest. Let's Shotgun jump up there and- 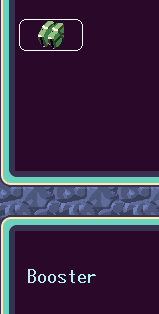 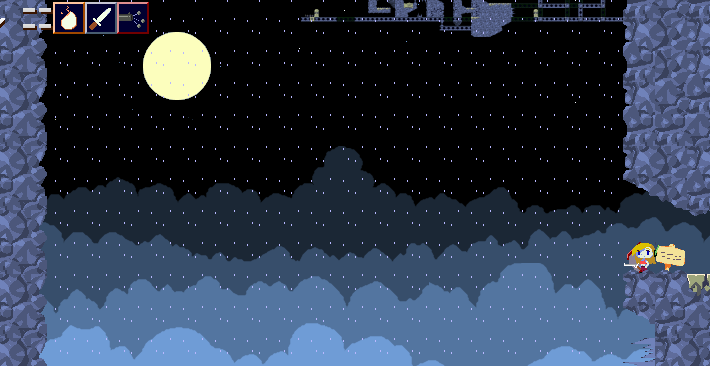 I like how you can see the previous areas in the background. Nice touch. 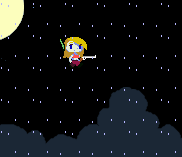 AND UP WE GOOOOO. 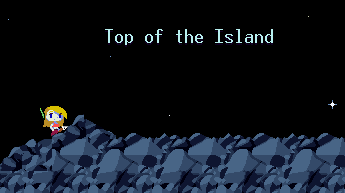 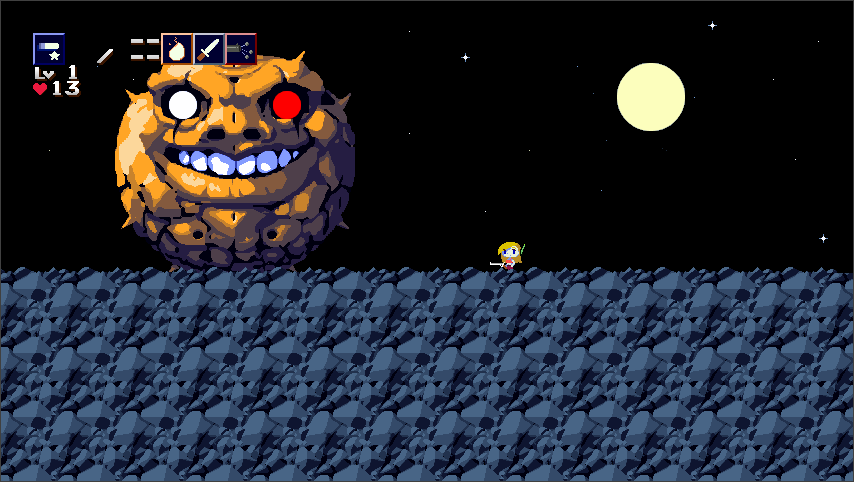 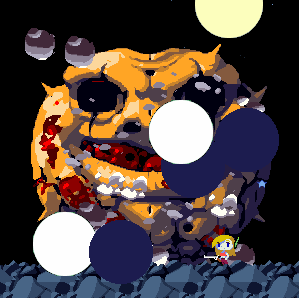 OH MY GOD I BEAT HIM. I BEAT FUCKIN BALLOS WITH A SPUR AND LIKE 14 HP WHAT THE FUCK AAR 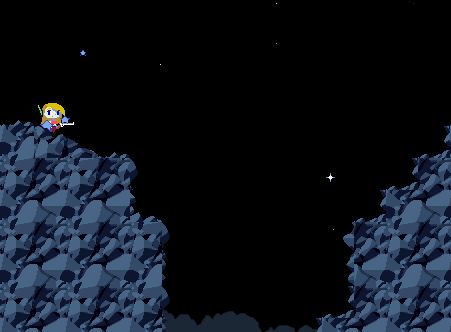 Oh it's required. Okay then. 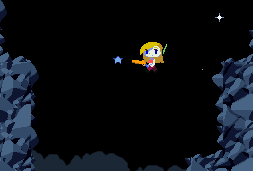 In we go then.

Wait, am I back at the original ending door?


Thank you for your review!

First of all, to be honest, I completely unexpected the Spur area to be reachable without the Booster. I've made it easier to reach, in order to save on time for speedruns. Thank you again!
I intended video game deluxe's Time Attack mode to be identical to video game's, which is why the Overgrown Area's transitions still act like the 4:3 variant. I changed a few tile properties, however, so this should have been changed for the final release. Unfortunately, it is now too late to change with the game being released.

I'm glad you enjoyed the mod!

I'm not sure if this run can be considered legitimate, since the game wasn't running at 100% speed

I've updated the thread with your score. 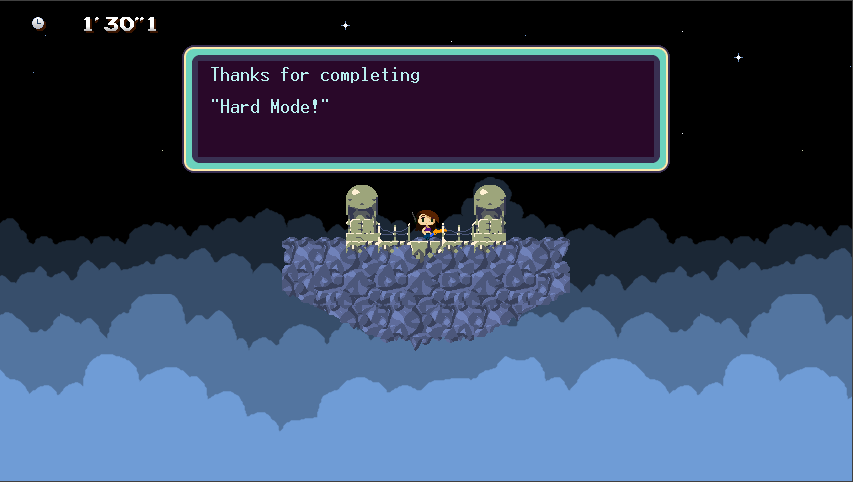 I like how Hard Mode makes you play carefully while simultaneously trying to go as fast as possible. A nice balance. The new content to the first playthrough was neat, too, though the new boss was a piece of cake thanks to the second hidden weapon.
Mods:

"It's dangerous to go alone!"
Join Date: Apr 9, 2013
Location: Lurking in the shadows... ;)
Posts: 39
I managed to cut two seconds off of my time. I'm pretty happy with it, so I probably won't work on it too much until someone beats it.

ChampionDude345 said:
I Cant believe it. All my hard work..for nothing...
Click to expand...

Welcome to the cruel world of videogame. Please leave your sanity at the door.
Mods:


Download | Google Drive Mirror
As an incentive to speedrun this mod, here's my time for Shotgun Challenge:

Love the polish of the deluxe release and shotgun challenge, Aar.

I've added your time to the high scores list.


X-Calibar said:
Love the polish of the deluxe release and shotgun challenge, Aar.
Click to expand...

Thank you immensely! I'm glad you enjoy the mod!

TLinkan said:
Just thought of dropping by to show this! =w0
Click to expand...