"Fresh from the Bakery"
Join Date: Jul 18, 2019
Location: ᠎
Posts: 6
So, these are old ass news, but after my quick search I think no one has mentioned them yet, so I figured it's okay to post.
These graphics were found in switch version of Cave Story+, and show button images for PS4, Xbox One, Wii U and Switch itself, obviously. Switch ones are used on the title screen, in case you changed controls, but other console's remain unused.
Was Cave Story+ for nintendo switch planned to be a major re release for several platforms? Today multiplatform games can have almost unchanged code for each console, so it is possible. 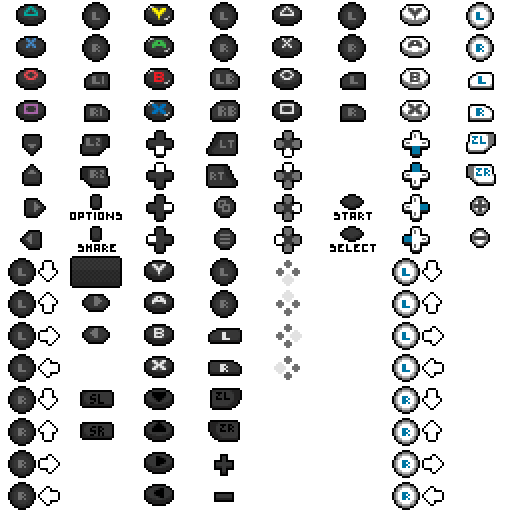 Bobomb says: "I need a hug!"
Join Date: Jul 20, 2015
Location: Under sea level or something
Posts: 770
Age: 23
Are you sure that these graphics are exclusively used for cs? I feel like some of these buttons wouldn't even be relevant to the game to begin with and makes me wonder if this isn't just some sheet to be used for multiple project.
Though I could just be really wrong on that.
Insert witty remark here.

"Wow! The more I drink of this magical beverage, the more games I can play! Wheee!"
Join Date: Oct 14, 2015
Location: My Room
Posts: 28
Age: 18
Maybe my idea for why there's multi plat controller icons are either ports or a universal sheet used for some of Nicalis games idk
Aug 3, 2019 at 5:59 AM

It's probably using the same engine as before, but recompiled for ARM.


AcedicDart said:
Today, multiplatform games can have almost unchanged code for each console, so it is possible.
Click to expand...

Code and one spritesheet are not the same thing. Having one set of graphics work for every console is convenient.