"It's dangerous to go alone!"
Join Date: May 9, 2013
Location: Great Lakes
Posts: 43
I've lately listened to a lot of Steam Powered Giraffe
I also really like some of Caravan Palace's stuff
I had a big crush on Coldplay for a long time
Lorde is also good, only slightly ashamed of that
I listen to the Super Meat Boy and VVVVVV soundtracks a lot, and the 2005 Phantom of the Opera soundtrack, and some Tessa Violet
And of course the Cave Story sountrack
Mar 13, 2015 at 10:57 PM

It's really fun to listen to new things

I should make an effort to diversify my listening.

...The few songs I listen to lately, are either stuff others are playing in the house (coldplay-like stuff for instance);
an occasional song I happen to get addicted to on youtube ("Shatter Me Featuring Lzzy Hale" by Lindsey Stirling) that leads me to more of their songs:
https://www.youtube.com/watch?v=RrutzRWXkKs

or maybe tracks from some game or movie I liked.

As for favorites, they really fall into a combination of two categories.
A) I simply like them outright for catching my attention for being exceptional to my tastes. (rare these days by itself)
or
B) Music that represents something else that was exceptional, like a soundtrack to a particular scene that was unforgettable.

I used to listen through many thousands of songs looking for a few amazing songs that I'd love. But, nowadays, my favorites usually have a strong foundation in the second category.

Here are several from memorable games:

This one is... more strongly rooted in the first category. I just really like it lol. But, it is synomonous with a technology/modern ambient theme I just want to loop over and over for background music...


To me, this song represents an unforgettable sense of nostalgia. Some place, that we might all return to in our distant memories. Also, used in Utawarerumono the game and had a profound impact with the timing of its introduction. I was just blown away at that time, by how well it flowed together. I absolutely loved it at once, and even now sometimes that song might stop me in my tracks from the memory of it.


... This one. It's a bit of both categories. It's an underwater song that represents a place between life and death. I feel like I'm drowning, as I listen to this one. From Ever17, and yes, there's a particular scene where this is used where the lines of reality blur. Where you swim in endless darkness, holding your breath, wondering if you will ever find the surface...


It's not THE song I was looking for, but a close runner up. It's a song of gods and demons, of drifting space and time. ... But, you already saw the title, didn't you?

Paths said:
pummel is post-mainstream music
you have to remember that he's absolutely disgusting inverted hipster trash
Click to expand...

I am not disgusting or inverted!

Pummelator said:
It's a blank. Fill in the blank.
Click to expand...

As much as i love rock and its many sub-genres, there are plenty of awful rock acts (although we all have our own opinions over which those are.) Everyone likes their own music. Now, as i previously posted, I don't like most 21st century music, but actually there has always been awful music: create a spotify playlist for the nineties, and you will have a constant flow of TLC and Gangsta Rap. Try eighties and there will be plenty of overused synths in songs that all sound the same. Anyway, get the point? There has always been crap, in all genres. Even my beloved alternative rock.
mank demes
Mar 17, 2015 at 2:06 AM

"What're YOU lookin' at?"
Join Date: Jul 10, 2009
Location:
Posts: 1004
Age: 37
Artist: Ludwig van Beethoven Favorite work: Missa Solemnis Reason: Beethoven was a mystic not a mere music composer. This is the music of the philosophy which describes nature and it's laws, shows the true divine nature of man, teaches love, empowers with seemingly "supernatural" powers, gives happiness and goodness to man in all his affairs.

"This is the greatest handgun ever made! You have to ask yourself, do I feel lucky?"
Join Date: Jul 12, 2012
Location:
Posts: 91
Just here to drop off a load of music n'stuff.

(These are just some of my favorites)

Port Blue - I Am the Aeronaut


And finally, the best of them all...

Charlton Heston and the Blast Beats - The Atomic Neck Slam

Basically all my favorite music is comprised of music from Adam Young. I also Like Coldplay.
wauw
Jan 31, 2016 at 7:02 PM

1. So Weezer's releasing a new album. From the songs I've heard on it, it will be better than most of the music they have released in the past 10 years.
2. The Gorillaz and Radiohead are also getting lots of hype for their albums, although I'm anticipating the Radiohead one a lot more.
3. Also, as pretty much everyone in the western world knows, David Bowie died this year sadly. It was really unexpected to be honest, since none of his fans knew he was dying until he really had. He was a bigger influence than many think to be honest. Many modern art rock and of course space rock acts never would have existed without him. There would be no Muse or Radiohead, and one that's pretty small but important is that Nirvana would never have done that legendary cover of "The Man Who Sold The World." Would they have existed without him? Probably. But Bowie proved that music didn't have to follow a formula to be loved, which inspired new wave and even punk acts.
4. Thanks to the revival of the "Show us your desktop" thread I did this to show off my beautiful beautiful iTunes library. I've doubled it since this thread was started, so now is a good time to post it 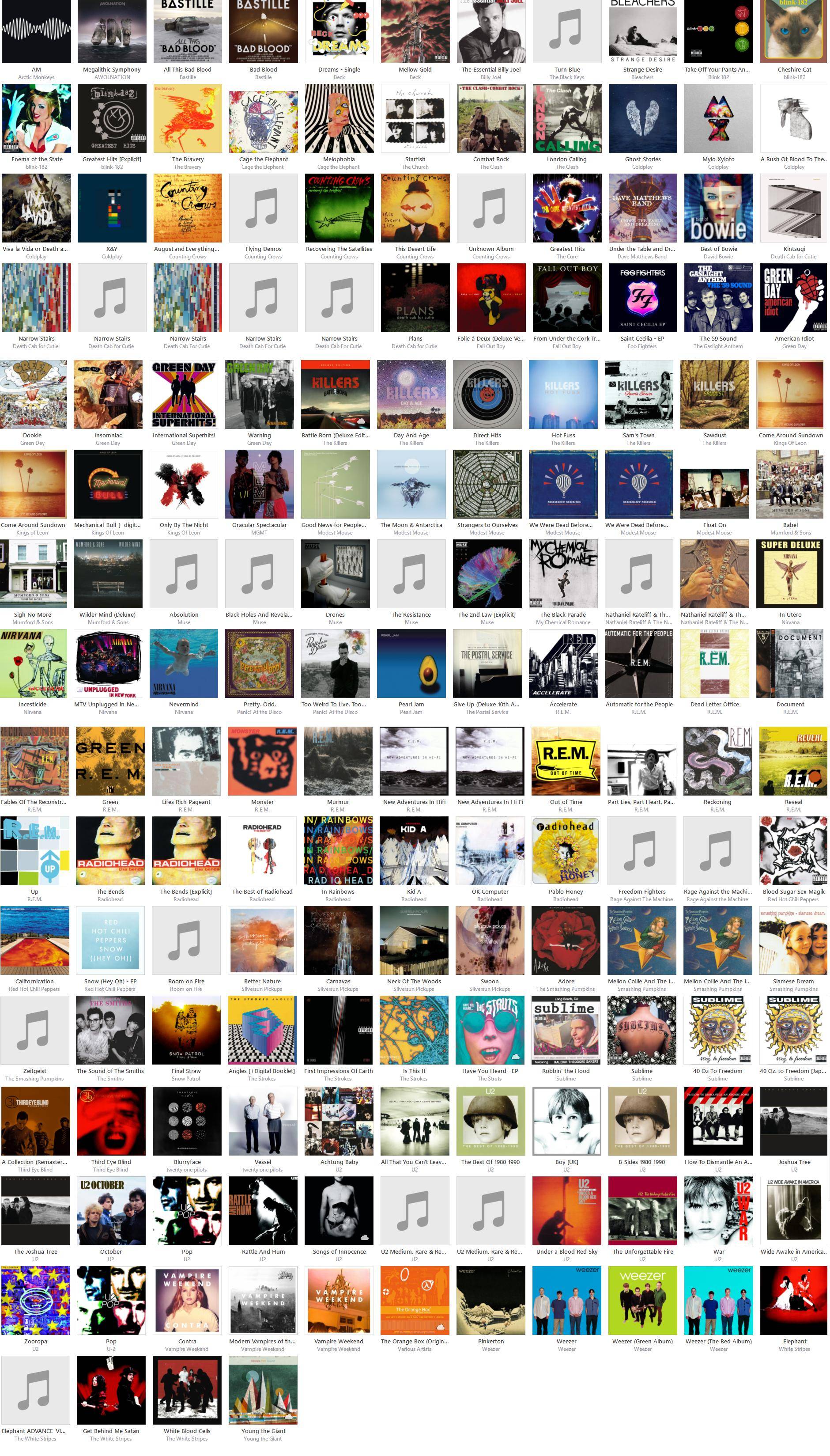 "I'm a fan of WARP. At most times, I like what they would have to offer with their selection of talented, creative producers. Some of them aren't my taste, but names like Boards of Canada or Nightmares on Wax make me happy inside. Granted, I've always had this subtle narcissistic vibe from most of the producers in WARP, but for me, it can easily be ignored. "Garbage" is by far my most favorite album from Autechre. Autechre isn't very easy to get into at first, especially if you're jumping right in trying to listen to their more recent albums. Unlike their recent complex albums like "Quaristice", their older works such as "Inaculabula" or "LP5" host some pretty rock solid beats with some mind-warping ambient synths. What I really like about early Autechre is how their tracks always seem to slowly evolve organically, like slightly twitching the tempo or flattening a beat and merging it seamlessly with other sounds. "Garbage" is a beautiful EP, and I'd recommend this be the first album to start with. All the tracks in "Garbage" are just that; a virtual trashcan filled to the brim with broken sound data slowly elevating and taking over, forming into beautiful and emotional compositions. Their most recognized track, "Vletrmx" is the grand finale to the EP.. and it's mind blowing. "
Last edited: Feb 12, 2016

"This is the greatest handgun ever made! You have to ask yourself, do I feel lucky?"
Join Date: Jul 12, 2012
Location:
Posts: 91
So, I really want to share with everyone a (fairly) new year-long music project by Adam Young, called Adam Young Scores. Each month of 2016 (excluding January), he has been, and will be, releasing a music score based on his interpretation of historical events.
As of writing, there are: Apollo 11, RMS Titanic, The Spirit of St. Louis, The Ascent of Everest, Omaha Beach, Miracle in the Andes, Project Excelsior, Corduroy Road, and Voyager 1. I think all of these sound fantastic so far, and there will be more to come, on the first of every coming month, until the end of the year.

An favorite from each:

The Thunderhead - The Spirit of St. Louis

Khumbu Icefall - The Ascent of Everest

The Tail - Miracle in the Andes

I strongly urge you, if you have the free time, to listen to these. I think you will like them.

VinylCheese said:
So, I really want to share with everyone a (fairly) new year-long music project by Adam Young, called Adam Young Scores. Each month of 2016 (excluding January), he has been, and will be, releasing a music score based on his interpretation of historical events.
As of writing, there are three: Apollo 11, RMS Titanic, and the Spirit of St. Louis. I think all of these sound fantastic so far, and there will be more to come, on the first of every coming month, until next year.

I strongly urge you, if you have the free time, to listen to these. I think you will like them.

OH YEAH I saw these on his Twitter / SoundCloud when they came out. Never got around to giving them a proper listen though, so thanks for the reminder. It's great to see him doing orchestral stuff now though. Apollo 11 sounds totally grand, gotta love the piano in that.