"All your forum are belong to us!"
Join Date: Oct 20, 2013
Location: Florida
Posts: 598
I wonder if there could be a mod of the month. Say (for example) that the mod Cat Heaven is chosen as top mod of the month, like a promotion for being a mod that seems to be widely accepted.
The choices for the poll (question 2) are either full mods, or mods that have great quality, or potential to them. After a few weeks this could be a thing on the front page of the site.

PolarStarGames said:
Not enough mods created to warrant a mod of the week. Perhaps a mod of the month?
Click to expand...

This is a good idea. As expressed before, a mod of the week is crazy and wouldn't work (I'm sure we've gotten plenty of weeks when no mods were released). A mod of the month actually seems really cool, especially to promote some of the better mods that get lost in the sea of dreadful mods. I'm just curious how it'd be implemented.

"Run, rabbit run. Dig that hole, forget the sun."
Join Date: Jan 24, 2011
Location: New Westminster, BC
Posts: 1368
Age: 26
Just to comment on the new poll option you added, I think it's pretty obvious that only the second option (all types) could work. There just aren't enough mods with full releases, and if we're trying to pick out the quality mods than all mods should be allowed.

We're all clearly already aware of his superiority, this is just a way to enshrine it 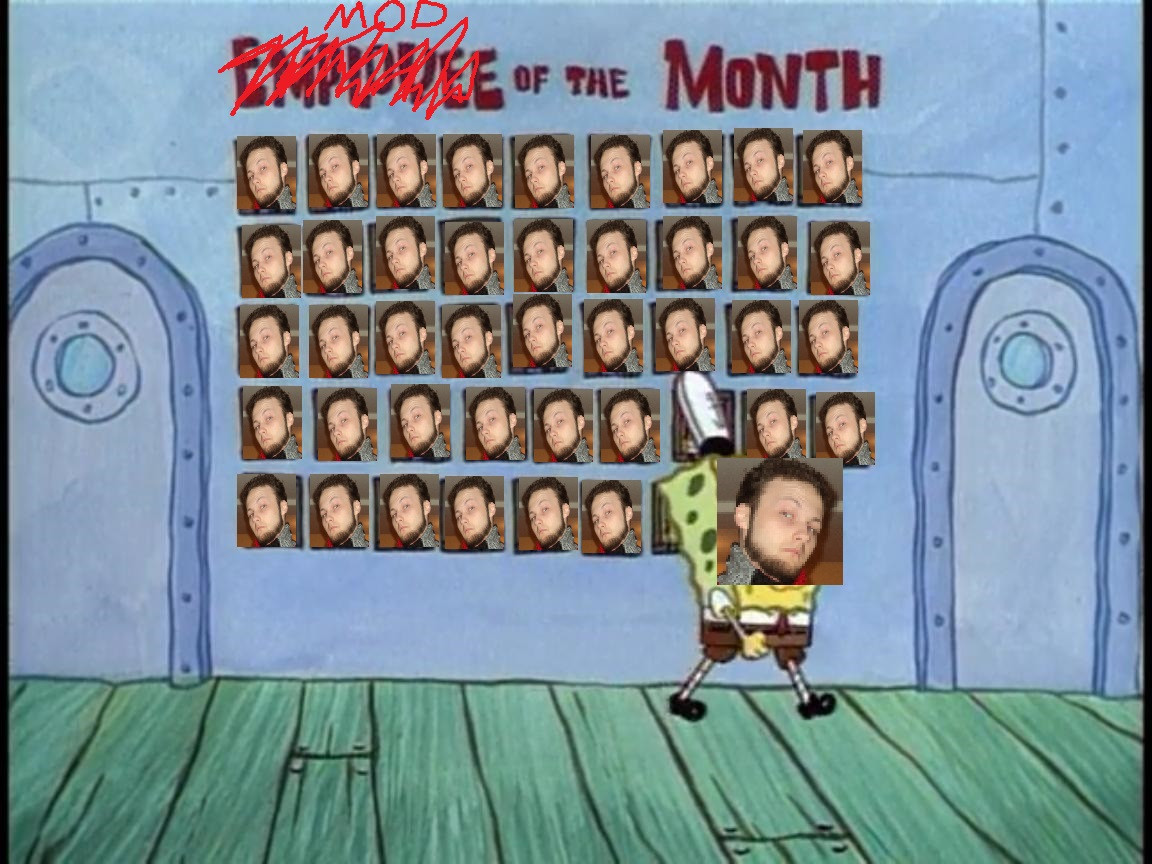 "Life begins and ends with Nu."
Join Date: Jan 13, 2011
Location: Lasagna
Posts: 4485
the problem is
no one cares
like i don't think a lot of people actually play mods anymore and unless someone is dedicated enough to do this every month it'll go down before the first winner is chosen
EDIT : USER WAS WARNED FOR THIS POST
Apr 3, 2014 at 2:24 AM

ColdCallerloppy said:
Now I know you can photo shop in a split. And I now know what Noxid looks like.
Click to expand...

I take a joke and I will run a triathlon with it if I have to.

Serious contribution: A mod of the month thing is a good idea, at least that's my initial reaction. I'm not actually sure if there are that many people here who don't play/try out the mods (shame!) and I think the main people it'd benefit would be new and prospective members.
Apr 3, 2014 at 2:42 AM

"What're YOU lookin' at?"
Join Date: Apr 23, 2013
Location: In a cave above the surface.
Posts: 1042
Age: 24
It guess it does make more winners than simply the single person/two people who win a Kanpachi award.

And I agree with Jersey that the finalists of the past month should receive a final/second chance in the next month, just incase we have, say, a couple of good mods followed by a month of terrible ones, or if a new update makes it better than the month before.


(No one actually plays all the released mods though.)
I currently own and administrate a Discord server primarily focused on modding Cave Story.
To download any of my mods, all you have to do is choose a host:
Doukutsu.Club ~ Dropbox ~ Google Drive ~ Mediafire ~ Mega.nz
Apr 3, 2014 at 3:29 AM
Z
ZarroTsu
Been here way too long...

Nobody is going to work towards a fake forum trophy. If they are, the catch-22 is that it will require effort and dedication, of which will ultimately take longer than a month. As a result of this, there will be several months in a row where entries are either nonexistent or absolutely awful, and there will be no choice but to be a decided 'winner' for it to be 'fair', ultimately rewarding bad content for being rushed and undedicated because the content that wouldn't be will not be done in time.

Your concept of time is abyssal. Assuming most forum members are in school or working, it leaves 8 days a month to dedicate full-time toward the goal, and time that could be better spent being productive. I ran a 'boss of the month' on the Fraxy forums for a time, and entries were scarce for something that ultimately lasts 10 minutes of play time, and in a community equally as active as this one. It lasted three months of mediocre content before it was stretched to "bi-monthly" and then systematically canned another four months later for producing less than 5 entries at a time.

In short, why not make a mod that is 'mod of the month' material instead of wasting your time putting together a forum contest about it?
Apr 3, 2014 at 4:10 AM

"Life begins and ends with Nu."
Join Date: Aug 28, 2009
Location: The Purple Zone
Posts: 5998
I assumed this would just be a monthly showcase of mods from the beginning of time

If there are enough interested parties in pushing a mod of the month, I could see a "featured" mod of the month working... Basically an excuse to play a mod, and have a bunch of people talk about it and try it.
Whether it's ancient, or just came out; choose them based what you think people might want to be informed about?

Maybe write a little something about the mod? Maybe its history or about its creator, or something special it did (a hack, graphics or music...)

Add a splash of color with screenshots (or video) and it'd be prettty. lol
Or maybe livestream?

And perhaps the person running the mod of the month could pass around the baton to those who want to write an article for a particular month, after a quick agreement of their chosen mod...

But, then again, the forums aren't exactly the most formal place...
@OP

All ideas need someone to care for them. You should adopt the idea you yourself brought into the world, and raise it properly. And if you can find someone to share responsiblity, then all the better!

Anyway, I'd say, if you're inspired, make a topic that checks out mods, and inspires other people to become more involved. And should it happen to catch fire, contact your local administrator

"Life begins and ends with Nu."
Join Date: Jul 15, 2007
Location: Australia
Posts: 6206
Age: 37
Could we make it quarterly, make it a rule that no previous winners can renominate, and open nominations up to all mods and custom CS engine things (so Noxid doesn't feel left out) since this site began? This way no-one is pressured to rush a mod, the competition doesn't outstrip the list of possible nominations, and everyone has a fair chance no matter when they made their mod.

Noxid said:
I assumed this would just be a monthly showcase of mods from the beginning of time
Click to expand...

can we do this instead of what other people have been suggesting; this would actually work
cave story randomizer [open mode]
------
twitch
twitter
soundcloud
Apr 3, 2014 at 9:05 PM
S
Slither
Professional Whatever