"Life begins and ends with Nu."
Join Date: Aug 28, 2009
Location: The Purple Zone
Posts: 5998
Now this is something that I've been thinking about for a while, and I believe that it's time for SW to hang in its hat. Anybody that asks for help with modding is more or less told "Don't use that" when they have questions, and nowadays there are viable stable alternatives such as CE and BL.
So, what does this mean? Well, it'd require two things:

1) removing SW from the CS Deluxe pack. IMO this is probably the root of the problem, as a lot of people are going to discover modding by playing with that and they don't have any incentive to look into the alternatives since it's work to look them up / download them. I still think it's cool to have one in the pack, but could we include an editor that doesn't conflict with the mainstream choices? Or better yet, include both the ones that play well together ;]

2) Adding a warning to the description on the tribute site saying that it is incompatible with other editors. Technically there is some directionality as you can edit a SW with CE but not vice versa, but for simplicity's sake I'd just put that it won't work with anything else. Or even further, moving it to the "Defunct Tools" section but maybe that's a bit much. I mean, I would advise against *anyone* using Sue's but I'm sure there are some who would disagree.

I know there has been a lot of resistance to putting SW out to pasture in the past, but I think that CE has been stable enough for a while, and BL's getting enough features locked down that we have some good alternatives for people to work with.

"It's dangerous to go alone!"
Join Date: Jul 30, 2011
Location: Alaska aka Ice Hell
Posts: 39
Age: 24
I kind of have a feeling this came up because of my recent troubles in that other thread. Anyways though, I agree. Sue's may look the most user friendly, but it's kind of limited at times and may cause some trouble. I know I've had some times it's pissed me off prior to what I've started making yesterday.
Signatures are too mainstream.
Mar 5, 2013 at 5:49 PM

"All your forum are belong to us!"
Join Date: Jun 12, 2009
Location: Dracula's Castle
Posts: 570
Age: 29
I think I tried SW first because it had Sue in the title, but I ended up having a lot more luck with CE after trying both.
I don't pay much attention to the modding community but agreed, I haven't seen anyone suggest using it in 5ever.
Mar 5, 2013 at 6:51 PM

"Wacka-Wacka-Wacka-Wacka-Wacka-Wacka-Wacka-Wacka-BLEIUP"
Join Date: Oct 24, 2011
Location: Canada
Posts: 327
Age: 24
I agree with you, Whenever people start modding CS, they always use Sue's,
the reason for me was that it was in the cave story Deluxe package, like a lot of people.
I don't want more people asking about how to use Sue's with other modding programs.
In short, I agree, Sue's should be depreciated.
*signature removed by Noxid*
It's actually been so long, I don't remember if that message is from Noxid, or a joke from me.
Mar 5, 2013 at 7:13 PM

"Wacka-Wacka-Wacka-Wacka-Wacka-Wacka-Wacka-Wacka-BLEIUP"
Join Date: May 21, 2012
Location: Location Location. Thats my motto.
Posts: 304
Age: 25
I completely agree. It caused me so many headaches when I first started using it(when I was nutso for modding), I just decided to stop using it. I know that a lot of people are going to disagree with me, but I think that it should be put into the defunct tools because I feel that it'll just be unnecessary clutter for the main modding tools section(and mostly 'cause I can't stand that little bugger).
Random Quotes:

My Steam profile. Though I'm hardly on it because my fossil of a laptop slows the games to naught but a stuttery crawl.
Mar 5, 2013 at 7:50 PM

"Life begins and ends with Nu."
Join Date: Dec 31, 2011
Location: United States
Posts: 2214
Age: 25
When I started modding, I used Sue's Workshop because conveniently the threads that I had read at the time didn't seem to have a problem with Sue's, and the downloads page at the time made it look like Sue's was the better option due to saying that it had a more appealing interface. And since Miza was listed at the far right, I figured that the one at the far left was the best choice, so I started off with Sue's. The downloads page has fixed this now, but there's still the problem of the deluxe version having it, which, by the sound of what everyone's saying, is another source of new modders using Sue's Workshop. Also I know now, and knew even when I began modding that this is one heck of a crappy reason, but the name of the editor appealed to me more than Cave Editor's.

It would have been nice to have known earlier than I found out that Cave Editor doesn't wreck your .EXE quite as easily as Sue's. On the other hand, it was nice as a new modder for me to be able to ease into modding by starting with a more intuitive interface that made me cling to it even when the tutorial I was following used CE. The better interface and working automatic test feature are advantages that SW has over Cave Editor... But that's coming very close to being made obsolete due to Booster's Lab becoming more stable. If it weren't for Booster's Lab, I would be in opposition towards depreciating Sue's due to how it helps new members, but at this point there's less reason for Sue's workshop to even exist, so I'm going to support phasing it out, and also support putting it in the list of defunct tools and making a new Cave Story Deluxe download.

Sue's Workshop had its reign, and it is now time for that to end. Also, maybe some time eventually when Booster's Lab is completely stable and Noxid says it's pretty much done, maybe it wouldn't hurt to put Cave Editor in the list of defunct tools as well. That's just me though.

"Run, rabbit run. Dig that hole, forget the sun."
Join Date: Jan 24, 2011
Location: New Westminster, BC
Posts: 1368
Age: 26
I haven't used SW before, but that's only because I never ever had any problems with CE. So if what everybody is saying is true, I totally agree that some action must be taken.

In all honesty though I like Sue's :c
But yeah it shouldn't be in CS Deluxe

"I, Ikachan. The Life and Documentary of the OrigiNAL SQuiD."
Join Date: Dec 31, 2012
Location:
Posts: 188
Oh, that reminds me, I used Sue's workshop. and it ruined the Start Point into something I can't even figure out, made me really angry.

"Life begins and ends with Nu."
Join Date: Jul 15, 2007
Location: Australia
Posts: 6195
Age: 36
I've been considering that for a long time but I figured that the Sue's users would be very up in arms over it. SW users always used to be a vocal lot. But seeing as no-one has defended Sue's yet (though I'd expect RuneLancer and SP would defend it if they were at all active) I see no reason not to depreciate it. Though I may reappreciate it if SP ever releases his version of SW (though after about two years of no news I'm a bit sceptical about its release).

As for a new CS Deluxe, I've been working on that on and off, so expect that to happen sometime down the line.

"It's dangerous to go alone!"
Join Date: Jul 30, 2011
Location: Alaska aka Ice Hell
Posts: 39
Age: 24
You know, I'm not usually the guy with negative opinions, so I think I'll leave my opinion at this: Sue's is a decent program for really basic modding and beginners, but if you want a full fledged mod go for something like Cave Editor.
Signatures are too mainstream.
Mar 6, 2013 at 12:41 AM 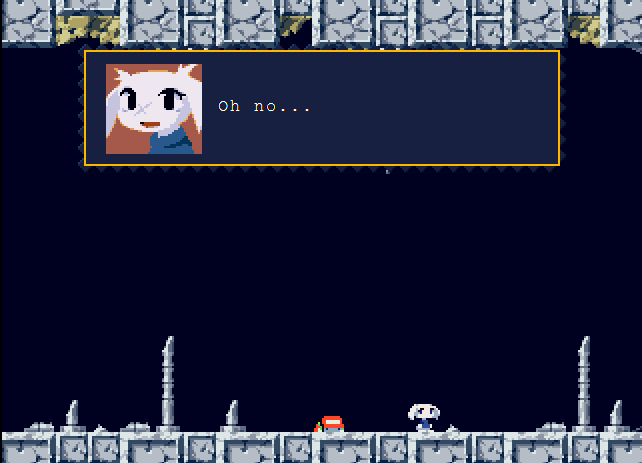 "Wacka-Wacka-Wacka-Wacka-Wacka-Wacka-Wacka-Wacka-BLEIUP"
Join Date: Aug 5, 2012
Location: Under The Sea
Posts: 318
Age: 30
Your suggestions are good. Thing is, you're absolutely on the ball with the fact that just about every new modder will try SW first. It was one of the first tools I played with and, if I can be frank, I found it pretty easy to use as well. I think it's also that user friendliness that makes people want to stick with it, but I have noticed that everybody is basically saying "don't use it".
Mar 6, 2013 at 2:11 AM

"In Soviet Russia, graves keep YOU!"
Join Date: Oct 20, 2010
Location: Within the hearts of all
Posts: 691
Age: 102
The only honest reason I changed to Cave Editor after using Sue's Workshop for a while is because of changed music and graphics. For me, it was a huge deal having the whole list of TSC commands right there, which I didn't know it had until I switched. I could never go back to Sue's Workshop because it is really too strict in what you can do with your mod, as I'm pretty certain it can't remove the (C)Pixel requirement, (I might be wrong) and you can't make any new music. The only time it should honestly be used is if one is a pretty experienced modder and wants to make a very simple mod without any actually new features.

Basically it's very outdated and shouldn't be used, as everyone has pretty much said.
:J