I really, REALLY think Pixel is making a new game

"Big Joe Tire and Battery Restaurant! Opening Soon! Eat at Big Joes!"
Join Date: Sep 7, 2011
Location: IT'S TIME FOR A SHAQDOWN
Posts: 539
Does anyone mind if I theorize the controls for Rockfish?


Now, when I first saw the control layout for both landscape and portrait views, I thought to myself, "Man, that looks awkward. In portrait, I have to squeeze my large hands into such a small space, and in portrail, my entire left thumb will be moving like this awful control layout." It wasn't until today when I had my "Aha!" moment and figured out how tho move the character. So, first things first:
Not all of the buttons on the left side of the screen will be used.
I figured this out by looking at the picture that had a picture of the gameplay, which had the left and right movement buttons highlighted, and the landscape picture with the up and down movement buttons highlighted while the menu was onscreen. If it wasn't obvious enough, left and right will be used to moved, and up and down will select the options/chose anything onscreen.
And now for the guesses:
Button 1 swims as well as flop, jump, etc.
Button 2 shoots the laser.
As for button 3, it might be unlocked later in the game. It might not exist because the portrait picture is a contradiction.
Menu does what it says. It brings up te menu.
So, that's what might go on. It might change in the future.

main:
if - no works
then - make games
else - finish works 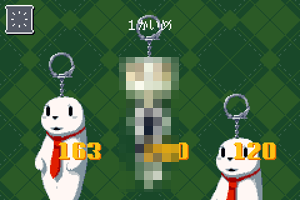 "Seal" is I get on track, it moved to another month.
Rockfish development should not go back soon.
Oh. Tetai make another game about it .. 1 month
Click to expand...

"Life begins and ends with Nu."
Join Date: Aug 28, 2009
Location: The Purple Zone
Posts: 5998
The backgrounds look really snazzy and the new sprites are nifty
I guess I'll have to get the actual thing if I want to see Ame's sprite.

Noxid said:
The backgrounds look really snazzy and the new sprites are nifty
I guess I'll have to get the actual thing if I want to see Ame's sprite.

"All your forum are belong to us!"
Join Date: Dec 31, 2010
Location:
Posts: 560
Well i guess ill be one of the few getting it if it comes out by christmas (i have enough money for a $15 gift card. And i own a 4th gen 8gb ipod touch).
I'm a beta tester who spends almost all my time on the PC, so I can answer requests very quickly. As for my beta testing skills, I like to say I exaggerate it but it still pays off.

I think I see your problem....

"Life begins and ends with Nu."
Join Date: Jan 4, 2008
Location: Lingerie, but also, like, fancy curtains
Posts: 3054
I hope you are being sarcastic sir.
(I really just don't understand sarcasm) 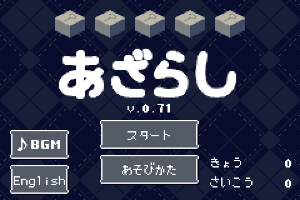 [quote name='Pixel's Development Page'] Not to say it back to Rockfish.[/QUOTE]
I assume that means: Not that I have to say it, but back to working on Rockfish.
cave story randomizer [open mode]
------
twitch
twitter
soundcloud
Jan 5, 2012 at 10:08 PM

I don't know if it's on the store right now but it probably will be soon enough.

"Big Joe Tire and Battery Restaurant! Opening Soon! Eat at Big Joes!"
Join Date: Sep 7, 2011
Location: IT'S TIME FOR A SHAQDOWN
Posts: 539
Actually, it has been released in Japan, but not in the US yet.
Here it is anyway, in case it has been released in some other country.
IMPORTANT EDIT: Azarachi is available outside of Japan. Just go to his website over here on the top of the page and click on your preferred language. Now, I have not tested it for other countries, but I do know that it works in America.

Oh, yeah. Don't expect this to work with purchases. It may be better to wait for this when it comes out in your country.

"Life begins and ends with Nu."
Join Date: Oct 18, 2011
Location:
Posts: 2334
Azarashi is on the Canadian App Store as well. Downloading as I type.
EDIT: So fuuuuuuuuuuuuuuun.... Here, have some screenies!

Normal seal is, obviously, the first keychain you have. If you get 1200-1299 points, the seal with glasses becomes one of your keychains. When you get 1300-???? points, Ame becomes a keychain. There may be more, I am not sure.

"Life begins and ends with Nu."
Join Date: Aug 28, 2009
Location: The Purple Zone
Posts: 5998
Could you not rotate those or something? I think I pulled a muscle in my neck looking at that

"Big Joe Tire and Battery Restaurant! Opening Soon! Eat at Big Joes!"
Join Date: Sep 7, 2011
Location: IT'S TIME FOR A SHAQDOWN
Posts: 539
So, if you couldn't tell, Pixel updated his site a while ago, and it looks very snazzy.
One of the major changes was that he made three separate development blogs:
3. Rockfish post Azarachi iPhone
2. Azarachi iPhone
1. Rockfish pre-Azarachi iPhone
As with that, he updated Blog #3 with this: 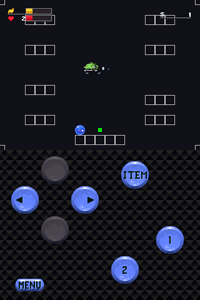 "This is the greatest handgun ever made! You have to ask yourself, do I feel lucky?"
Join Date: Feb 4, 2012
Location: Somewhere
Posts: 117
Age: 24
Is that rockfish?
You must log in or register to reply here.
Share:
Reddit Pinterest Tumblr WhatsApp Email Share Link
Top