So, How did YOU find out about Cave Story?

"Fresh from the Bakery"
Join Date: Nov 15, 2014
Location:
Posts: 6
I first heard about the game because in this one video I was watching, this guy was doing a metal cover of a bunch of video game themes, and Cave Story was one of them. I liked the Cave Story one, so I looked it up and decided to buy it. Really glad I did.
How do I even use a photo as my signature?
Nov 19, 2014 at 8:40 AM

PoppyMuffin said:
I first heard about the game because in this one video I was watching, this guy was doing a metal cover of a bunch of video game themes, and Cave Story was one of them. I liked the Cave Story one, so I looked it up and decided to buy it. Really glad I did.
Click to expand...

Just a question are you talking about FamilyJules7x? 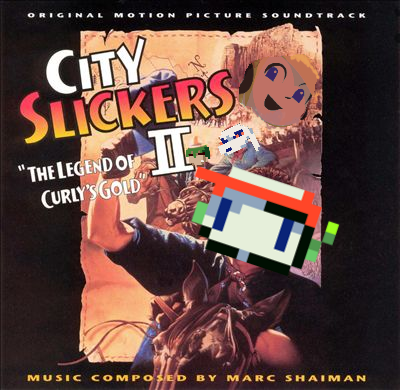 "Ha! Ha! Ha! Mega Man is no match for my Mimiga Man!"
Join Date: Mar 28, 2014
Location: Los Angeles
Posts: 256
Age: 21
I was in second grade, and playing the newest flash games on andkon.com. One of them had you run around in a cave for a really long time. At one point there was a statue that read something along the lines of, "Dedicated to Cave Story." Curiously, I quit the game and looked up Cave Story. I downloaded the deluxe package, and whoahhhhhh. Played until the bad ending, and was too stupid to realize that there was a normal one as well. Flash forward 3 or 4 (or 5) years, when I look up the game's wiki and find out about the good ending, after which I started my time here.
"It's always the jews" -BLink, 2018
Dec 6, 2014 at 3:36 AM

"It's dangerous to go alone!"
Join Date: Dec 5, 2014
Location: IN HELL
Posts: 35
Age: 20
I actually found it on the 3ds e shop got addicted it was about two years ago,then i found out it was for mac pc wii psp and more and i was so excited i beat the game like 15 times before i got bored then i got cheats,mods and all kinds of stuff,this game never ceases to make me happy
Welp i am not very creative with small signatures sooooooooo.....yea
Dec 6, 2014 at 7:04 AM

kirbmanboggle said:
I actually found it on the 3ds e shop got addicted it was about two years ago,then i found out it was for mac pc wii psp and more and i was so excited i beat the game like 15 times before i got bored then i got cheats,mods and all kinds of stuff,this game never ceases to make me happy
Click to expand...

Pummelator said:
And you can't forget about the Sega Dreamcast homebrew port! Now if only there was a Vectrex port of Cave Story (or at least part of it).
Click to expand...

"It's dangerous to go alone!"
Join Date: May 26, 2014
Location: on the Internet
Posts: 43
I heard about it vaguely over the years and ignored it. Then I decided to play the flash port of NX-Engine CS.
Prolonged exposure to MikMod causes miscarriage in pregnant women and holes in the ozone layer.
​Lotsa org files.
Jan 14, 2015 at 10:43 PM

"Fly, Fly, Fly!"
Join Date: Sep 19, 2013
Location: C:\Users\Shinigami\Dirty_Videos
Posts: 125
Age: 24
Back in 2007 I think, I was at my new friend Josh's (now my best friend) house. We were just watching YouTube videos and such, then he started showing me some games he had downloaded. Among these were Cave Story and RuneScape. I immediately started playing RuneScape, but (for some reason) thought Cave Story looked dumb. About 2 or 3 years ago, maybe 4, I saw some related video on YouTube that was about Cave Story. Why did that name sound so familiar? I Google'd it, then stumbled upon this site and downloaded the game. I instantly fell in love and beat the normal ending in 3 days (not that impressive, I know). Most random PC platformers I play I just end up forgetting about and never playing again, but this one, without even knowing there was a better ending, made me want to play it again, and again, and again. Cave Story has left a lasting impact on me and I want more of it, yet don't want a sequel to a perfectly made game as that doesn't usually work out well. Then I found the forums, and the mods. Needless to say, Cave Story is one of my top 5 games of all time and is likely to remain there until the day I die.

"Fresh from the Bakery"
Join Date: Feb 16, 2015
Location:
Posts: 5
I found out about Cave Story In 2010, I was watching Nintendo Week where Gary & Alison would review some fun games for the Nintendo wii. One of there shows they talked about Cave Story, I never heard of It before, and I was thinking woah I gotta buy this game! I played the game, and really enjoyed It. My favorite adventure was the Bushlands. As I remember I think my favorite In-game soundtrack was somewhere In the adventure world where you first meet Curly. Though not at the place. So to this day I still like playing Cave Story sometimes as It brings back some good memories. How about you?
Feb 21, 2015 at 4:55 AM

"Huzzah!"
Join Date: Feb 13, 2015
Location: Canada
Posts: 216
Age: 23
Saw the review for the + version in a Game Informer magazine about 4ish years ago, downloaded the freeware version about a year later, found out about modding about another year later.

While ya'lls was going about your business, I've been in the shadows, lurking, watching, waiting for the perfect opportunity to make my move...

And make it I will

"This is the greatest handgun ever made! You have to ask yourself, do I feel lucky?"
Join Date: Aug 2, 2014
Location: inactivity.
Posts: 115

Jpzarde said:
And make it I will
Click to expand...

This contains information relevant to this thread.
However, it *also* contains a ton of extra information.

Anyway, AFAIR(emember), TvTropes. I saw references to Cave Story, eventually decided to download it.
From the CSTS, I learned about Ikachan.
Having seen NXEngine, I noted that Ikachan didn't have anything similar.
That was the beginning of Ikachan Map Editor.
A whole NXEngine-like thing was too big a scope for me, but I tried(and documented the entity format along the way).
I eventually settled for a map editor, and begun building the basic GUI.
The GUI code at that time was a horrible mess, but it worked.
It was a simple map editor, had the Ikachan entity editor integrated alongside it(although a bit broken).
Finally, I created a account on the CSTSF,and released it, hoping that someone would expand upon the work done in there.
I gave up eventually, became someone who just discusses things.
That's changed recently, but any more is getting way off-topic(so far I've extended this to include joining the CSTSF).
IME is quite certainly dead, but it does work.
PiyoPiyoJ works!
- Due to an irrecoverable series of hardware failures, the following links are dead. I have the files, contact me if you want 'em. -
NICEv3.1 (CaveStoryMod-NICE-Audio-V3.1.zip / SHA-1 cd0dea6d8bce45de9bcc22b01fe11293584d9e59) If you're going to just copy the whole mod as a template, make sure to get rid of the "Demo" folder. Please note that NICEv3.1 is outdated in comparison to Clownacy's much better techniques.
PEONS-V0.1-C (DND_PEONS0.1-C.zip / SHA-1 c90e42deca8aeb68a8a5748456cd4c3e3f75c5fc), for people who prefer ASM to Lua. Includes a copy of NASM and some patches for use with GSA2.
CSM-DDX (CSM-DDX.zip / SHA-1 bfb3100d9af2868f4959f6f1fb15fb3885b13594): For people who want to use the Steam Overlay + fullscreen Cave Story. Most of Cave Story not included. Usable with mods if you use a hex editor to modify the import table (just ask me)

Basically inactive. Due to a fun naming issue (turns out "gamemanj" is way too phonetically close to something entirely different) my Discord name is 20kdc.
Feb 22, 2015 at 1:23 PM

"Fly, Fly, Fly!"
Join Date: May 12, 2013
Location: Above the mortal plane
Posts: 133
Age: 25
I found out about it around the time it came out because I had actually already known about Ikachan. Funny enough, I didn't become that involved in the community even though I could have been a founding member.
Goddess of Retribution, at your service.
You must log in or register to reply here.
Share:
Reddit Pinterest Tumblr WhatsApp Email Share Link
Top