So, How did YOU find out about Cave Story?

So how were you introduced to Cave Story? I was introduced mid-2009, I had recently bought a wii points card and when a friend came over he recommended that I get it, so I decided to take a look (neither of us knew it was free on PC). I said "meh, it looks OK... nothing special" and spent the points on something else. A few weeks later it was my birthday, and at my party someone got me a 2000 Wii Points card and I had no idea what to spend it on. I was searching the store, and decided that I might try out this Cave Story game, purely because I couldn't think of another game to get. By the time I got up to the Bushlands (aka Grasstown) I was hooked. That was my story, but what about yours?
[quote name='Wild Desu' timestamp='1331261436' post='145817']
I think Cave Story is quite capable of giving you mental issues. Just look at some of our fine members on the forum.
[/quote]
Mar 12, 2011 at 3:26 PM

"Heavy swords for sale. Suitable for most RPG Protagonists. Apply now!"
Join Date: Dec 26, 2007
Location: Lithuania
Posts: 1946
Re: How were you introduced to CS?

I was introduced to it by my brother, soon before the AGTP translation. My brother found it by accident at vector.jp and I was instantly hooked to the funky gameplay.

I first found the game way back in '06. You can witness the phenomenon here:
http://www.sawbladesoftware.com/forum/viewtopic.php?t=758

Second post is the link to an old broken CS download, and then my response is a few posts down. Pardon my mentally disabled child-like posting structure, this was five years ago.

Back then I think I only played up to the Undead Core and got stuck there, it wasn't until I joined MG that I actually came back and finished it.
Mar 12, 2011 at 4:47 PM

In 10th grade, one of my friends told me about this game and how it's AWESOME and has the best music EVAR and I need to play it RIGHT NAO. Said friend had said just about the exact same thing about Within A Deep Forest a little while back, and he was right about that game, so I figured with Cave Story he'd be right as well. At first, I almost just gave up at the title screen because I couldn't figure out which key to press to start the game

Hehe I assume you're talking about the one on that other forum.
Yeah, I used to have cheese avatars for everything and draw it everywhere. And now I can draw cheese LIKE A BAWWSS.
Mar 12, 2011 at 5:14 PM

I heard there were new WiiWare Demo's, so I wanted to play them. First I scrolled to all the games. When I saw Cave Story I found it an strange name. I wasn't sure what kind of game it was, but it got my attention. I downloaded the game and as soon when I clicked on the channel I heard this.


I think I have listen to it at least 5 times before I actually started the game.

So when I began to play and saw thos rabbits (mimiga's

) I was confused. But as soon as I started to play, it felt so great! I loved the 8-bit style, I loved the music. Everything was so great! I have played that demo over and over.

I search on the internet and learned all those things about. Like that Pixel has made this game on his own. I was so amazed. I downloaded the game on the computer and played the hell out of hit.

So to make a long story short:

Because of the Wii Ware Demo

Man, I would have liked it if someone told me about this 3 years ago..
Thanks for reading my signature but there is nothing interesting about it.
Mar 12, 2011 at 5:22 PM

Revolution said:
Before you read: I'm european (not sure if that makes a different but you never know).

I downloaded the game and as soon when I clicked on the channel I heard this.

I saw that the Wii now had many demos, and I have heard about Cave Story a lot on Youtube. So I played the Cave Story demo, liked it enough to spend my Wii points on it, and became my favorite game due to it's addicting gameplay and story.

And he also introduced me to the forums. So you can blame my existence on him.

I already said how i was introduced to cave story on the introduce you're self now wheres my cookie topic but here we go again.

Ok one day i turned on my wii i saw the nintendo channel had another episode of nintendo week i saw the game cave story and it looked interesting i went to get the demo i played it and quite frankly it was KICKASS.I randomly used yahoo(yea i dont use google much.But i do use google chrome)and found the tribute site i downloaded the game and it was great now as an added bonus ill say what happened a while later.so i found out about the irc chatroom doukutsu i whent there and noxid was there we talked for a while and i volunteered as a beta tester for kings story and to be able to communicate with him much better i got an account so thanks noxid i guess.
I'm a beta tester who spends almost all my time on the PC, so I can answer requests very quickly. As for my beta testing skills, I like to say I exaggerate it but it still pays off.

I've noticed that most people here were hooked after the wii-ware port... 'Guess that was a smart move by Daisuke

I honestly don't remember. But even though I joined just last year, I never actually had the Wii version. Anyway, I only beat the original just last year after many, many times trying to do it. It's not that it's hard, just that I never kept my save. I discovered it a few years ago, which is :J.
:J

Found it on Acid Play. First I thought it`s a lousy game when I saw the graphics of First Cave. I was already addicted at the Mimiga Village already.
I am all and all is me.
Mar 12, 2011 at 10:59 PM

Anyway, I found Cave Story via Deceased Crab's Let's Play around mid-2008, forgot about it for a while, and then started modding in mid 2009.

A friend of mine called me and gave me a 2 hour description of the game in 2008 while I was on vacation in SanDiego, "2 hours away" which means I knew about skipping booster 0.8 before I even got to that point. He sounded ecstatic about it, so I tried it and got hooked. He was a raving fan, but lost that giant interest he originally had, now that I mod, he finds my obbsession with the game, "which is now equall to his original level" to be a little wierd.
Mar 13, 2011 at 1:24 AM

I actually heard allot about cave story 2 years ago and always went “I’ll look at it later” and never did. Anywho, after another year had passed I decided I would at least have a go at it… wish I have gotten it when I heard of it all 100 times before :/
Am I the only one that laughs when kid's fall over?
... And is that strange?
Mar 19, 2011 at 1:23 AM

I found out about Cave Story thanks to Gameinformer when it came out for Wiiware. I recently getting more into retro games when I found the gem known as Cave Story and I hearted it from first sight.
1.)Do not argue with an idiot. He will drag you down to his level and beat you with experience.
2.)I ♥ how I listen to rock music as I go around the forum, because I am so EPIC as I type comments.
3.)If I were Quote, I would have a nose bleed just like he is, for some reason I clap in joy when I find images like this: 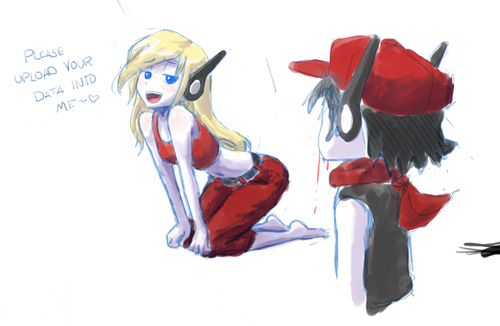 magic9mushroom
Been here way too long...

Well, TVtropes and a few other places on the web.

Anyway, I found Cave Story via Deceased Crab's Let's Play around mid-2008, forgot about it for a while, and then started modding in mid 2009.
Click to expand...

Same here! Well, except for the modding part. I've seen Cave Story's modding language, and it gives me headaches trying to make sense of it all.
Locking his house and keeping red flowers in his basement since 2004.