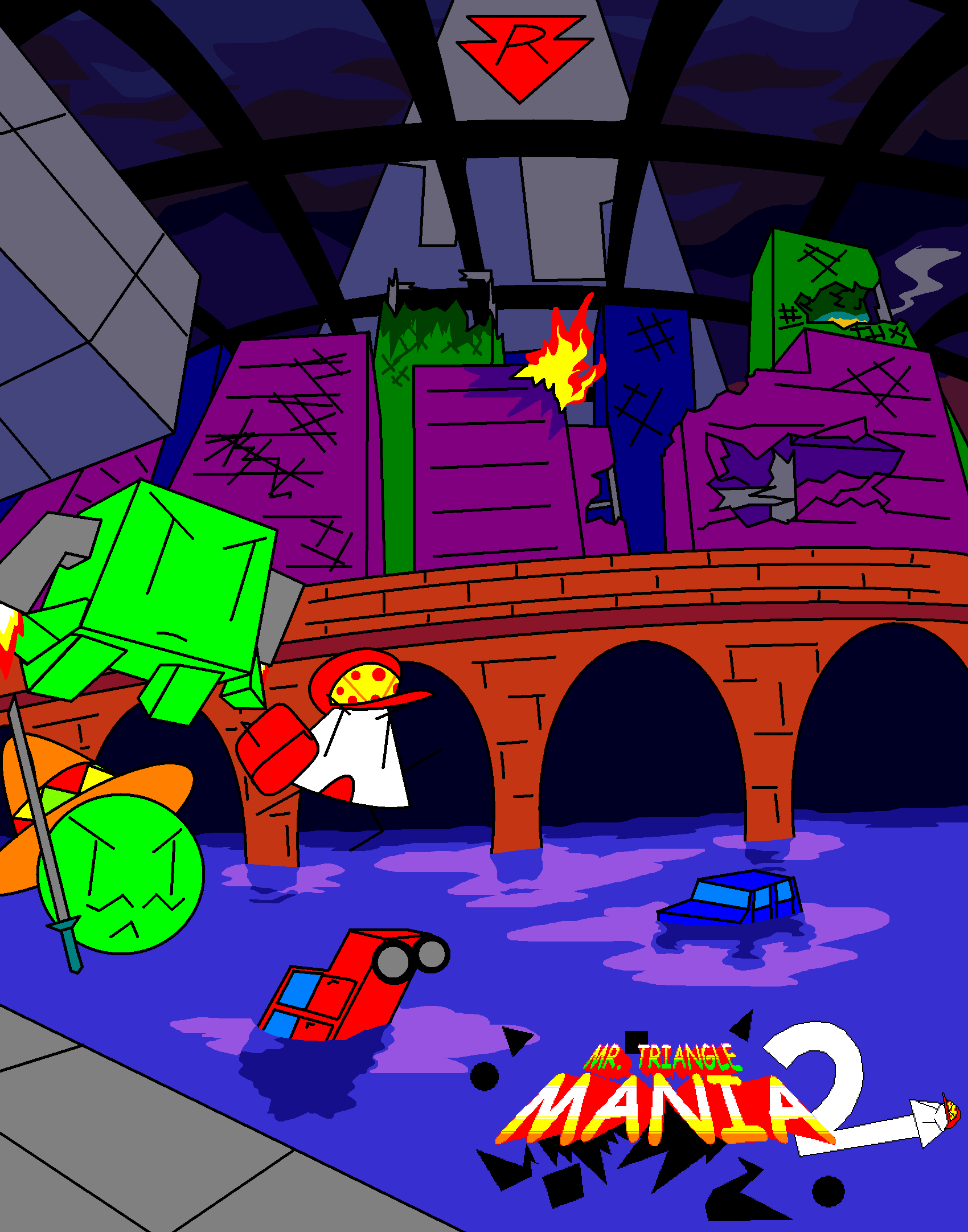 This is the sequel to my previous game Mr. Triangle The Pizza Delivery Guy Mania Simulator 2k17 (you don't need to play that before this though, the backstory is mostly explained in 2). It technically came out 2 years ago but I finally finished the (probably last) update and made a trailer:
Plot:
2 and a half days after the events of the previous game, the city has erupted in riots! Mr. Triangle teams up with his nemesis Dr. Square and his son/robot/whatever Señor Circle (whos pretending to be a mexican stereotype and also likes Fortnite) to take down Root The Cat (AKA me)'s anime-banning empire!
(Wacky shenanigans ensue, of course.)

Features:
-3 playable characters (plus a 4th unlockable by completing the game as the main 3)
-10 stages
-17 bosses, plus an unlockable Boss Rush
-Time Attack mode
-MS Paint-esque graphics because that's "muh style" ^_^
-More stupid 2017 memes, SiIvaGunner references, and injokes
-It's kind of like Cave Story I guess
-Playable on trashy computers

Download (SFGHQ, may be slow due to the popular SAGExpo launching soon)


(I really hope I actually get more feedback this time)
check out my sikk mod:http://www.cavestory.org/forums/index.php?/topic/6452-mail-story-rdx/

"Big Joe Tire and Battery Restaurant! Opening Soon! Eat at Big Joes!"
Join Date: Oct 7, 2013
Location: India
Posts: 480
I don't think I got around to finishing the original but I do remember enjoying it a lot. I will definitely check this out when I get some more time. Gotta say, though, the box art looks absolutely amazing!
I remade the font in CaveStory+ as an installable font here.
Also a small deviantart here.

Hatred can overcome despair, but it corrodes the heart in the process.
The process can outweigh the product.
Good minds can remember, great minds can forget.
Kill your anger before it kills your sanity and yourself.
The truly blind aren't those who cannot see, it is those who cannot perceive/understand. (What sounds better?)
Sometimes, looking at the big picture can help you see more detail.
How can humans be complicated enough to fight wars, yet be naive enough to not have peace?
Hard work doesn't always pay, but no work always doesn't pay.
Imagination is what drives reality.
Scars don't show how much you've suffered, they show how much you've endured.
If everyone were a leader, nothing would ever get done.
The best way to live a life of dignity is to throw away your pride.
Freedom itself can be debilitatingly restrictive in its own right.
The destination is just an excuse for the journey.
Being above someone doesn't give you the right to look down on them.
The state should hold as much power as necessary, and as little power as possible.
Sep 13, 2022 at 2:13 PM

The controls are a bit floaty and sometimes a touch janky, but usually consistent. Even with the appreciable supply of checkpoints stage 3 required a lot of very precise timing/memorisation for a relatively early (?) part of the game, especially the latter sections. It also wasn't very clear how to pass the first phase of the stage 2 boss. The stages and enemies haven't had a whole lot of variety so far but the boss patterns have been pretty creative and the music choices generally fit in well. Honestly I really dig the visuals, the artwork has been honed into a genuine style and the depth of the backgrounds and smoothness of some of the animations is downright impressive. The text and screen overlay effects are pretty neat too. I might keep playing in bits and pieces, my attention's kinda all over the place just at the moment but the next area looks interesting.
I'm an admin c: