At this link you will find a full list of all mods (minus a few months), which is also kept in my sig. Anything greyed out in the "Avaliable?" column is either presumed gone forever or currently not uploaded. Some other older links may have also died since I first went through them all. I am not going to upload something every time someone wants it, so until then you're going to have to sate yourself on the hundreds of mod threads that do have working links. I don't want to see you keep asking for links every time you find something that isn't.
I'm an admin c:

DoubleThink said:
Alright I'm going to try to make this as simple as possible

At this link you will find a full list of all mods (minus a few months), which is also kept in my sig. Anything greyed out in the "Avaliable?" column is either presumed gone forever or currently not uploaded. Some other older links may have also died since I first went through them all. I am not going to upload something every time someone wants it, so until then you're going to have to sate yourself on the hundreds of mod threads that do have working links. I don't want to see you keep asking for links every time you find something that isn't.
Click to expand...

Hey @minecraftstorymodefan, a word of advice: if someone answers your question/request/whatever, you should read the answer in full, so you don't ask/request something that's already answered and thus annoy the people who are helping you.
Just some Cave Story modder.

"Officially Worth 1 Rupee"
Join Date: Mar 25, 2019
Location:
Posts: 1
I'm playing ZarroTsu's version of Jenka's Nightmare, and I went back to the Underside after escaping the Labyrinth, and I got the cutscene where King's ghost or whatever jumps down the pit. However, the door out is stuck tight (because of the sand), and the statue that has a secret leading to the Sanctuary doesn't have sparkles to inspect, leaving me trapped because I saved down here. When I watch someone else's playthrough, their statue has sparkles to inspect. Am I missing something? If I'm stuck, can I edit my save to get out or reactivate the statue? If I have to restart, I think I'd just rather watch a playthrough rather than do all this again.

I think it was caused because I first went down the path to the Sanctuary, but it said that it was going to be really difficult, so I backtracked and went down the main path in order to save first. The sand fell, preventing me from going back, but I didn't notice until I saved, and I was real salty that I got locked out of the secret like that. 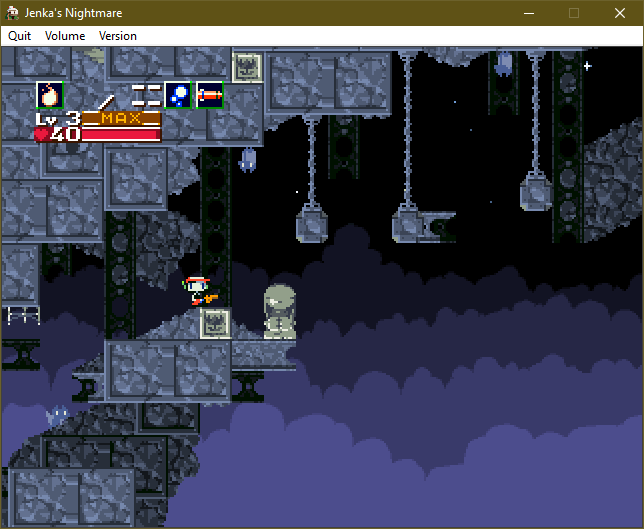 HaydenStudios said:
Oh yeah, I remember playing that mod. She dead. That girl's gone, and she's not coming back.
Click to expand...

Doesn't she only die post-game? Her mother's description in the credits say "Stayed with her children, and mourned them both." So the two has to have reunited sooner or later.
Last edited by a moderator: Apr 25, 2019
May 11, 2019 at 6:41 PM

"Wahoo! Upgrade!"
Join Date: Dec 8, 2018
Location:
Posts: 55
Age: 17
Bumping an old thread without due acknowledgement
(Edit by DT: Regarding Lords of the Crown)

"Life begins and ends with Nu."
Join Date: Dec 31, 2011
Location: United States
Posts: 2271
Age: 26
Other people were having the same problem. Read the other replies in this thread to see how they got around this issue.

"Fresh from the Bakery"
Join Date: Jun 27, 2019
Location: Pittsburgh, PA
Posts: 6
Hi, i'm new to these forums and don't really understand how they work fully, so please forgive me if this has been posted in the wrong place. I have a question regarding 'WTF story'. I've heard it's an amazing mod, but the latest version I could find is v0.504. Is this the latest version, or are there later versions for download?
Jun 27, 2019 at 5:25 PM

JCoxeye said:
Hi, i'm new to these forums and don't really understand how they work fully, so please forgive me if this has been posted in the wrong place. I have a question regarding 'WTF story'. I've heard it's an amazing mod, but the latest version I could find is v0.504. Is this the latest version, or are there later versions for download?
Click to expand...

Yes, I believe that was the final version that was released before GIR abandoned it.

That version should take you through the Carnival to the Snow Boss.

Tpcool said:
Yes, I believe that was the final version that was released before GIR abandoned it.
Click to expand...

Yep, that's how you use the quote post feature.

First thing I did upon entering the mansion was check all the booshelves. It got me somewhere that reminded me of Mario 64, but nothing came of it. So I left.

Here's the stuff I wrote before I started writing this post. Context added by me before I post all this are in (parentheses):

(Ah, I kinda went past most of the text, then realized "Ah! They showed a blue floppy! I should've started writing then!")

Pen and paper? Being in full screen won't stop me from typing this... on my phone! So, HA!
Anyway, uh, that intro wasn't really the longest.

(I'm the kind of guy who immediately leaves the room I just entered to see if the developers thought someone would do so. So, I ignored the mansion and went into the cave.)
(Holding down X to speed up text)
Eh? Not worth venturing...? The text didn't wait for me to press the button before ending!
Okay, dead-end. Time to check out the mansion-- WHAT THE?!
Oh, hey! I see some open space below me! I'm gonna-- the hell?! A dolphin-- oh, Sonic.exe.
HEADBUTT!
Aight, time to reset, since this screen isn't-- oh, it left. Hey, blue disk!
On the 'Skip intro test' screen, I began writing and heard a splash. Hm.
Gonna see what that text said...
(Went back to the cave, let text slowly play. Immediately tried to leave cave, died.)
Ergh, his teeth are yellow and white.
Books! SHI-- wait, am I in Super Mario-- that hole in the ceiling isn't as big as the one I fell in. But then again, I didn't fall straight down.
AHH I GOT WATER ON MY DAMN FACE-- oh, hi.
One way door. Didn't I close it? Why is it open when I'm inside the mansion? Or is it just light?
(Finishing what I started; examining all the booshelves.)
Booshelf?
'as' isn't capitalized in the save prompt! AHH!
(After leaving that basement-staircase area, I went into the 2nd door, went 'nope', checked out the 3rd door (library) then went for the 4th door.)
PFFFT, I'm being timed! Luckily, Sonic.exe can't use doors.
Oh, that's a nice painting of me!
Hey, I can control these Quote's when my movement is locked!
Oh, hi fake-Curly.
Oooh, morse code! Nice.
Oh, so that door just kills you? Thanks, flying head.
No saving, waaah. Got the gift of flight!
Was a single pixel short of a jump. Died.
(Got curious and decided to see if intro text was different)
OH, SO JUST BECAUSE I SAID NO ONCE YOU AREN'T GONNA DO IT AGAIN EVEN IF I SAY NO? Then why ask to skip?!
Found the flight gift again!
3rd torch lit, can't climb cave. Gonna fight Curly to see if something different happens.
Cheeseable by flying to that platform (the one with the door in the true ending). Head is instant death.
(4th of the 4th room. Entered painting-hole, after seeing Toroko, I left the way I came.)
Oh, you replaced the painting just because I left?
(Toroko went back to ominously standing there after I left and came back)
And you un-smoked yourself.
OOOOH! I'm upsidedown now!
I'm assuming nothing happens after the third blast.
Nice, healing just by admiring the view (even though the disk is in my face)! Thanks!
To that hole in that Exe-painting-escape maze-- wait, library!
Oh
Jump off? Nah.
Blinking stone.
Weird. I thought it'd spring up and chomp me like those sand-crocs.
Oh, back to Curly's room. No wonder those tiles were cracked! I thought the lack of a window was just cosmetic.
AHHH SHE'S COMING HIDE TO THE LEFT OF THE DOOR--
...
To the right, then!
If she attacks, I'm flying out the window.
Or not.
I live!
(Tried to heal, got warped instead!)
Finally, someone who speaks NORMALLY!
"Well, hehe, You are..."
Oh, My pronouns are capitalized now? This pleases Me.
QUIET? I'm just as tall as you are, mate!
Full strength, 50 HP (not 55?!), Polar Star-- er, Nemesis. Why'd I leave my other stuff at home?! Lemme pull out the Polar Star again!
Aww, you're welcome!

How did I find the ending, you ask?

"This is the greatest handgun ever made! You have to ask yourself, do I feel lucky?"
Join Date: Jun 24, 2020
Location: The Thousands Of Alt Accounts Club
Posts: 115
has anyone ever played useless gunsmith 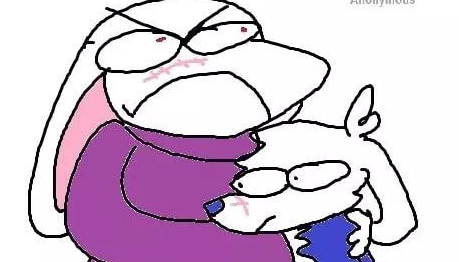 "Life begins and ends with Nu."
Join Date: Dec 31, 2011
Location: United States
Posts: 2271
Age: 26
I think this is the first time I've ever actually started a small little discussion in this thread, using this thread for its original intended purpose.
Some time back in 2011, I played a mod that I can't remember the name of, and I can't find it through a cursory search of these forums, and I can't find it in my folder, so maybe someone else knows this mod and can help me remember. It was a mod where you played as one of the robots that was sent to the island, most likely to kill Mimigas, and presumably to help Miakid acquire the demon crown. It had a very dark, grim, "war movie" kind of tone. It was a very polished mod, and I think it had custom music. The main part I remember was you being in Grasstown, and the layout was very similar to Grasstown in Cave Story, except it was wintery and snowy, and had somewhat of a darker color palette. At one point, you're sitting around the fire with another robot, and you go off to explore. At a later time, you come back to where the fire was, and the fire is out, and the robot you were sitting with appears to have frozen to death.

Anyone else who's still alive/active here ever played that mod and remember the name of it?

"Fly, Fly, Fly!"
Join Date: Jan 14, 2014
Location: Antarctica (The Penguins say Hi)
Posts: 143
Age: 22
That sounds a lot like Path of Ruin. Looks like the thread for it doesn't exist anymore, but you can download it from Doukutsu Club.
CS mods: