"Fresh from the Bakery"
Join Date: Apr 22, 2018
Location: At my computer.
Posts: 8
Age: 23
Sorry for the bump, but i'm having a problem.
I'm trying to use Bionicobot's Ptcops in Cave Story mod for this mod loader, but it's not working. I even set it up exactly like he did, but it's not working for me. I get the error: "Could not load mod 'PxtoneMod' Windows reports: The specified module could not be found."
Can anyone who got this mod to work tell me how they did it?
If you want to use any of my ORGs in MODs, check out my ORG Archive: https://drive.google.com/open?id=1IbwOxm1VX7SlZfdOnrD7yWEYhTYuuJPn

"Fresh from the Bakery"
Join Date: Apr 22, 2018
Location: At my computer.
Posts: 8
Age: 23
well, it's not working fine for me. something's not right and i don't know what
If you want to use any of my ORGs in MODs, check out my ORG Archive: https://drive.google.com/open?id=1IbwOxm1VX7SlZfdOnrD7yWEYhTYuuJPn

A lot of under-the-hood stuff's been done to the music DLL. Internally, now it has a full-blown sound mixer, so adding support for 'ogg SFX' in the future should be easy. I've also swapped out libopenmpt and libogg/libvorbis/libvorbisfile for the less-heavy libxmp-lite and stb_vorbis, bringing the DLL's size from 3MB to 800KB. Fun fact: Cave Story+ Switch uses stb_vorbis as its ogg decoder too.

If you're like me, and were horrifically disappointed by the Ridiculon soundtrack, I've also added support for Cave Story Arranged, the fan soundtrack by DM Dokuro. It's not too great right now, since it's not in a loop-friendly format, and none of the remixed jingles are there, but it works well enough.

You can get Cave Story Arranged here. Click 'Buy Digital Album' (you can "pay" $0 to get it for free), and make sure to select the Ogg Vorbis format. You can get it in FLAC if you want, but you'll have to change all the file extensions in 'playlist.txt'. Once it's downloaded, just extract the ogg files to the 'mods/alternate_music/Cave Story Arranged (DM Dokuro)/files' folder.

For anyone interested in making their own DLLs, I've added a project template to the Git repo, supporting both MSYS2/MinGW and Visual Studio.
Read my blog... or else!
Feb 11, 2020 at 11:42 PM

This is a maintenance release: a bug was found involving weapons appearing far away from the player under certain circumstances. There were also some updates to the music DLL's sound mixer, from early 2019.

This project will no longer receive any major updates: any future releases will merely address bugs. For an enhanced version of Cave Story that's intended to benefit modders, I'd recommend CSE2E instead. UPDATE: CSE2E is dead now, so for users who just want a better Cave Story, I recommend Cave Story: Tweaked, and for users who want a good base for their mods, hopefully CuckyCSE2 comes out at some point.
Last edited: Oct 21, 2020
Read my blog... or else!
Feb 13, 2020 at 7:59 AM

"Fresh from the Bakery"
Join Date: Jan 20, 2020
Location: The Floating Island
Posts: 12
For some reason, the title background mod isn't working for me

EDIT: Never mind, I fixed the issue. The title screen mod has to be the first mod in the list to work
Last edited: Feb 14, 2020

King (2.0) said:
So I've downloaded the Mod Loader and it works as intended. However, I'm not sure how to convert mp3 files to OGG, so how do I do it?
Click to expand...

"This is the greatest handgun ever made! You have to ask yourself, do I feel lucky?"
Join Date: Sep 23, 2019
Location:
Posts: 97
Thanks to your help, I've now gotten the tracks I wanted and converted them. Now regarding the actual tracks, how do I copy them into Notepad?
Feb 19, 2020 at 5:12 PM

"Huzzah!"
Join Date: Mar 25, 2019
Location:
Posts: 206
Take your OGG files to the Ogg folder, which is inside the 'Cave Story Wiiware' folder in the 'alternate-music' folder, then modify the playlist.txt and change the name of the song you want to replace with the new one. 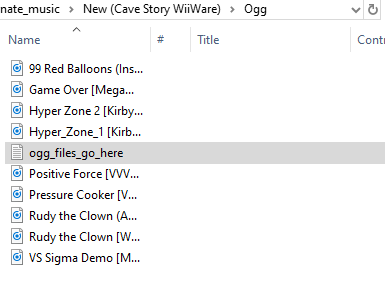 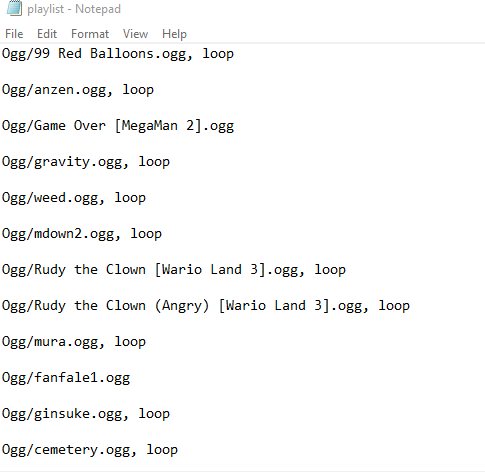 "This is the greatest handgun ever made! You have to ask yourself, do I feel lucky?"
Join Date: Sep 23, 2019
Location:
Posts: 97
As the screenshots show, I've copied the OGG files into the folder and I've modified some of the names but I'm unsure if it's actually correct. 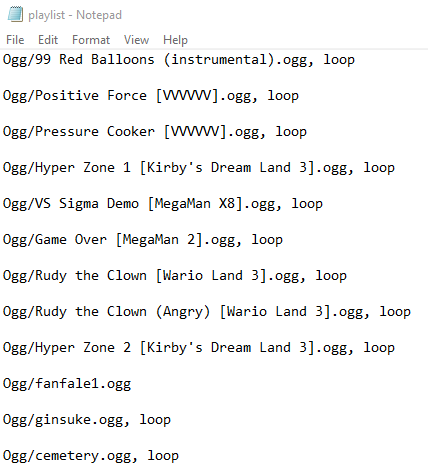 I've tried editing some of the names, though I'm unsure if they'll actually play. Come to think of it, am I supposed to put the files into the "OGG Files go here" document or not?
Feb 20, 2020 at 4:01 PM

King (2.0) said:
Come to think of it, am I supposed to put the files into the "OGG Files go here" document or not?
Click to expand...

I've corrected that now. I'll go check the filenames because they might be written incorrectly.

EDIT: So apparently the error I've gotten says it cannot sound which means that I've implemented the custom music incorrectly. I've even rewritten the names so they're all in lowercase, thinking that would help things. 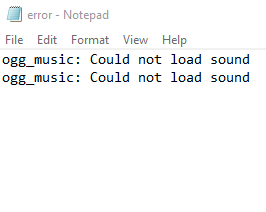