Code:
So the theory that king's red eyes were related to red flowers has some merit. Figured I'd throw this out there.

Anyway, I don't know how bizarre this seems, but I'll say it anyway.

It could be that King had a smaller dosage of the red flowers than Toroko had, which didn't cause him to turn into a frenzied Mimiga, and only caused his eyes to be a red colour.

The real Shane seeks the truth, I seek to ruin his reputation. And so far, I am winning. That fool and that stupid ex-girlfriend of mine will pay dearly.

"Master using it, and you can have this!"
Join Date: Aug 1, 2012
Location: Living With Quote,Curly,Balrog
Posts: 73
Age: 24
lol. i asked that why did king not dissapear question : p

"Master using it, and you can have this!"
Join Date: Oct 18, 2012
Location: United States
Posts: 82
Age: 23
I remember reading in the Cave Story wiki that Arthur got his strength from red flowers.
Maybe he passed this bit of information on to King before he got killed?
Nov 18, 2012 at 7:30 PM

Tale_Zero said:
I remember reading in the Cave Story wiki that Arthur got his strength from red flowers.
Maybe he passed this bit of information on to King before he got killed?
Click to expand...

I didn't know the wiki was for fanon

"Life begins and ends with Nu."
Join Date: Jan 13, 2011
Location: Lasagna
Posts: 4489
It is an interesting idea, though. Arthur could have researched the flowers and found a way to remove their negative side effects of boiling blood and such.
Then he could have passed it down to King. Then King tries it for some reason and is like "oh wait fuck my eyes" and that's why his eyes are red.
EDIT : USER WAS WARNED FOR THIS POST
Nov 18, 2012 at 9:59 PM

Shane said:
It could be that King had a smaller dosage of the red flowers than Toroko had, which didn't cause him to turn into a frenzied Mimiga, and only caused his eyes to be a red colour.
Click to expand...

That's what I always liked to think, I theorized he took a small controlled amount as a last ditch steroid.
it's always cool to see fan canon get confirmed, though.

I've also considered that the flowers could induce an addictive pleasureable drug-like effect, and maybe King had a bit of a lasting drug problem after being forced to take them.

I suppose that could explain why the flowers were still stashed in Arthur's basement.
Nov 18, 2012 at 11:33 PM

"Wahoo! Upgrade!"
Join Date: Nov 10, 2012
Location:
Posts: 51
In the game we see 3 mimigas with red eyes (well...not including the grasstown one and the ones you fight on the balcony. they don't have their own portraits)
They are King, Igor, and Toroko. interestingly they eyes are all different shades of red 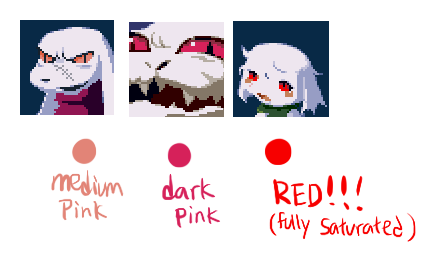 From what we know, King is a pretty normal mimiga. A bit irrational, sure, but still normal. He IS strong enough to take out Balrog in one move, but in turn gets killed in a single hit while the Doctor comments on how fragile mimigas are. (Heck, he even gets shoved around by Toroko back in the village.)
Igor is the first fully hulked-out mimiga we see. He has no qualms of beating you to a pulp....should you attempt to interfere with his master's lab. That means he still retained at least some traces of his sanity/memories, and his rage is not unprovoked.
Frenzied Toroko, on the other hand, doesn't even remember you as a friend. She attacks you as soon as she hulks out. 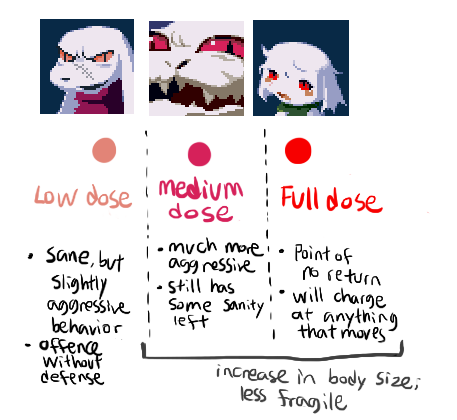 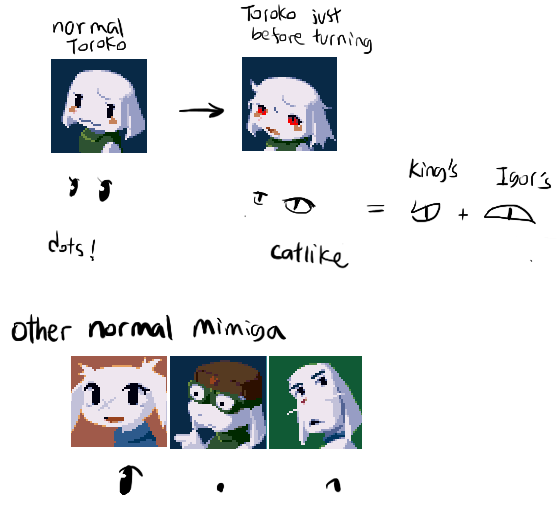 red eyes are not limited to Mimigas 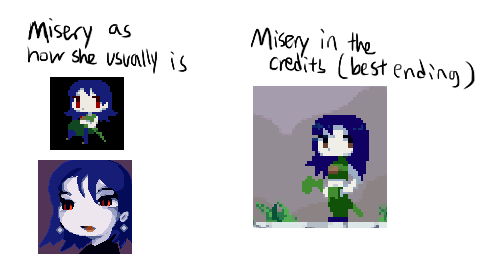