"What're YOU lookin' at?"
Join Date: Jul 10, 2009
Location:
Posts: 1004
Age: 36
Today a white Mimiga with a fishing rod knocked at my door and gave me a secret document, saying to present them to these forums. He also said that this is partly a joke, written out of EXTREME boredom. It is written according to the usual, non-specific format of ancient rituals , there is absolutely no allusion to any of them, and respect towards them is held highly.

Inner Order of Kanpachi
-grade of the fisherman-​
-******* (7 knocks)
-Why seven?
-Since seven is the day of rest. It is the symbol of the well deserved rest after a job well done.
-What is the job?
-The constitution of the Inner Order of Kanpachi. It also alludes to the fact that perfection is always present.
-Why Kanpachi?
-It is the allusion to the fact that in all seemingly foolish and childish things in life perfection is to be found. As the ancient egyptians worshipped cat and garlic to show how all the so called “little” things of life are exalted.
-Is our vault properly guarded?
-The answer is that it is always properly guarded, yet at the same time accessible to everyone. Every piece of dust is in the possession of the great secrets of life, only it is acting as it were ignorant of these.
-Most exalted Revealer, please present us the great picture of study. 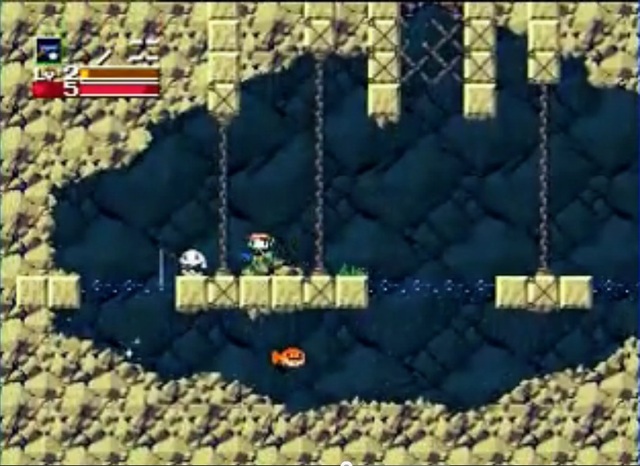 -Why is the white Mimiga fishing?
-Because we all are fisherman in the depths of our subconscious mind. If we fish right we get good results, if we fish like a sinister fisherman we get nothing. The water alludes to the waters of our changing emotions, and as we can influence our emotions we can influence our circumstances. The water always takes the form of the vessel in which it stands.
-Why is the Mimiga white?
-Think about how white light can be broken to all the colors of the rainbow. White is the synthesis of all colors, or aspects of life, everything. We are white since we can not part from our source. We also have an animalistic nature, aptly presented by the mimiga.
-What does the fishing rod allude to?
-The fishing rod is raised in 45 degrees, symbol of the same role of the horizontal and vertical planes of ourselves. See how you walk on this earth horizontally, but your aim is spiritual development. You must walk the earth as an upright man, but strive upward to the hights of consciousness. According to my mind this was depicted in the ancient saying: “ora et labora”. With the consciousness of “the fishing rod” elevated in 45 degrees we are able the catch the red fish of love, which will give strength and life to ourselves.
-Why is there only one fish?
-It is the allusion that love is found in everybody and everything. It is also an allusion that there can not be two or more infinites. If there were two, one would make the other one finite, since when one of them begins, the other one ends.
-Why are there six blocks under the Mimiga?
-Because creation has six steps, which is followed by the “rest” already explained by the seven knocks. We create our future with our thoughts. The feet in symboligy alludes to understanding, in this case to the understanding of the six blocks, in other words the fact, that life is what you make it.
-What do the 3 chains allude to?
-The 3 pillars of Faith, Hope and Charity which can serve as the pillars of our soul, saving us from drowning in the waters of despair, hatred, jealousy, and all the negative emotions.
-What does the spark in the water allude to?
-That we can, with right attitude fish out such beautiful things that we have never thought they exist.
-Where will Kanpachi go after fishing?
-Outside from the darkness of the cave. A good fisherman always leaves the cave of darkness, to enter a more exalted state. As the cave is surrounded by earth, such will be the cave of our mind surrounded by earthly problems until we are in darkness, When we leave the cave, earth will be under our feet.
-What does Quote allude to?
-He alludes to a person who is acting he has “forgot” his true nature as the divine fishing Mimiga, Kanpachi, approaching him from behind, not seeing the face of his nature. If he can not fish for himself, other people fish for him, and he passive like a robot. Fortunate are the few for who Kanpachi is fishing. This also alludes to the duty of every man to give the fish of love to any unfortunate wanderer of this world. Give and others will give to you.
-I hereby declare the vault of Kanpachi closed by the knocks of a finished work.
******* (7 knocks)

Aren't you a doctor? Don't you have stuff to do?

WoodenRat said:
Can you sell us some medicine illegally? I'd pay. Big time.
Click to expand...

What :S That doesn't make sense. Serbia uses 99% same medicaments as the rest of Europe and USA...sure as Lithuania too...so good news: you can get all your antipsichotic medication you need at home too, Woody!