A Cave Story Christmas (Not a mod; using GM:S)

WarCheif said:
Wait. You are saying that you made a machine gun that shoots level 3 lasers? I'm sorry but that is a little overpowered. Release a demo if possible, I would like a new type of CS. I have used GM before, only ONE instance can have health at a time. I wish you good luck.
Click to expand...

Level 3 lasers? Yeah, kind of. Except it costs weapon power, meaning you cannot just spam it, but you must kill enemies or destroy energy capsules to get more energy so you don't end up down-leveling the power of your machine gun upon firing a laser shot. I've already thought it out and it's quite well balanced, definitely not too OP.

I've been using Game Maker ever since 1999, so I've had enough experience to go beyond stuff like the D&D and I've moved on to using GML for my variables for health and such, rather than the built in score or health, because they limit far too much and the "easy" built in stuff is often clunky, bulky, non-professional, and just bleh to me. I prefer to do stuff on my own as much as possible. So I've learned how to use GML to do pretty much anything I want and because of that I really don't have many limits with what I can do in Game Maker now (my main limit is time).

Anyway, this game isn't planned to come out until Q4 2013, in time for next Christmas. I just made the topic a year too early.

EDIT: Btw, there has already been some small progress behind the scenes, I just won't be posting about anything until it comes close to Christmas 2013, since there is no way it will be ready for this Christmas.

EDIT - 12/19/2012:
Totally started from scratch on the head base, now that I know more on proper poly usage. As my first complete model, I'm making Link, from the Legend of Zelda. Hence the pointy ears and the blue eyes (the eyes are not mine; I found them via a Google search). The outline is not planned to be used, because it has some issues working correctly due to the low poly count (for it to work properly, edges can never go past a 90 degree angle), and I'd rather lose the outline than up the poly count. Instead, I will add baked shading, much like many other low poly anime models have:

My old head model had a lot of tris that it didn't need and the edge flow was a bit messy. This model has only 158 tris while the old one (shown on the first page) had 280, and the old one didn't even have a neck and ears. This means my new model has roughly half the poly count of what the other would be with a neck and ears. I consider that a win.

Here is my design concept for the Starfire: 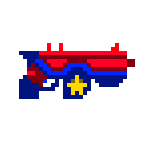 The design may change, because I'm not super happy with it. I was going for something that looked like a combination of the Polar Star and the Machine Gun, so that's why it's red and blue like that. If anyone has any ideas on making it look more badass, I'm all ears. I'm holding off on making the model until I feel I have a good enough design. The gun won't need a clip per se, but it does need an energy pack of sorts, which is the thing with the star on it. That pack stores the energy from the crystals inside of it, which is basically where bullets come from. So bear that in mind if you suggest a new design, it will have that somewhere on the gun. Also, I'd like to maintain the look of combining both guns, since that's exactly what the Starfire is supposed to be, a combo of the Polar Star/Spur and Machine Gun. If the design is actually good as is, go ahead and say so. I've been known to be an overly heavy critic of my own works.

Some in-depth details about the Starfire:

This is the only weapon of the game, besides King's Blade. The main firing type is very much like the ordinary Machine Gun you remember, but that is just the main feature of this gun. In addition to firing rapid shots, you can set it in a mode that fires single shots and you can also power it up to unleash a devastating laser beam shot, at a cost.

Rapid fire shots. This consumes 1/100 ammo with every shot. The recharge rate is incredibly fast.

Single fire shots. Each shot does +2 more damage than the shots in Mode A. In this mode, you can also hold the fire button to charge a massively powerful laser-like beam shot. Doing so will require at least 50 ammo, as it takes 50/100 ammo to fire. On top of the 50 ammo (that would recharge in a few seconds), it will eat up your weapon energy, and it can effectively level down your weapon if you aren't careful. This forces you to watch your weapon energy level.

Weapon energy works different than it did in the original Cave Story:

Power and consumptions for attacks:

Weapons this gun has covered:

Polar Star
Machine Gun
Spur
King's Blade:
My design concept of King's blade is settled, but it's on paper, so I can't show it here. Besides, it's pretty simple anyway; nothing all that special. The special part of the King's Blade is the Phantasmal King, which has yet to be designed, but I have a general idea on what I want to do with that. The details of King's Blade are still a WIP, so I will not list them.

A small taste of some early enemy concepts:

Design:
The bud will be totally based off of the Core, and the rest will be inspired by the plants from Zelda.

AI:
The Fire Plant will remain under ground until it senses its prey. It has a wide spreading root system which will sense ground movement, so as long as you don't walk on the ground above its roots, it will not know you are there. But once you do, it will pop up and you will have to get very far away for it to go back under ground.
The Fire Plant will constantly face its target when the target is in sight.
When the target is far away, the Fire Plant will execute a laser-like fire attack. The "bud" will open up a little and light up inside. This means it's charging a laser shot. Once it powers up, the laser will fire quickly.But if the target is near enough, the plant will lunge at it, just like in Zelda.

Design:
Same as Cave Story. Can be used as a platform for jumping on to and off of.

AI:
This thing tries to smash you when you get under it. Once it smashes down, it does not go back up.
I think that's all I'll show for now. I was hoping to have a lot more, but you guys have no idea what I've been going through with my character mesh designs.

Holy cow. I'm ridiculously picky about how things look for characters though, so that is the main problem. I have some good reasons for my pickyness though, because I plan to make a lot of my future games using the exact same character base meshes, and I have a lot to think about, like hair physics and allowing for real-time texture modification. Those things add in a few complications.

Oh, I'm also going to use this track in the game for... a pretty awesome area of the world (it's free and it's by Machinae Supremacy):