andwhyisit;98336 said:
One question:
Will this hack be for the european, american, or japanese version of Zelda 3?
Click to expand...

Im hoping for an EU/USA hack that works on my SNES flash cart. Imagine playing this game on the original hardware. Would be epic!
Jun 29, 2010 at 7:00 PM

"Life begins and ends with Nu."
Join Date: Jul 15, 2007
Location: Australia
Posts: 6195
Age: 36
Well I get hard copies of all of my roms, so after getting the US version cart a while back (I live in Australia, so we usually get the european versions) it would kinda suck if the hack was for the european or japanese version of the game.

"No! Don't OPEN that DOOR!"
Join Date: Sep 10, 2009
Location: Sweden
Posts: 0
He mentioned in his previous post that he isn't using the Japanese version. And it wouldn't make any sense to use the European version of the game, so you can be quite sure it is the US version.

Gamemakr: Note that only two of those glitches were Japanese only. So you could think through some of the design so you can't abuse one of the glitches to skip major parts in the game, or similar.
The shooting through blocks could be one of those, as well as bomb boosting to skip areas.
Jun 30, 2010 at 11:39 AM
P
philip82284
Lurking in the Shadows

"No! Don't OPEN that DOOR!"
Join Date: Jul 11, 2010
Location: North port, FL
Posts: 0
Cant wait for you to finish this new hack. Outlands quest was wonderful and i'm longing for the new Q4. Don't give up dude we are all rooting for you. Keep up the great work that you are doing.

No. You have to patch the rom and convert it to a wad file yourself.

"No! Don't OPEN that DOOR!"
Join Date: Jul 15, 2010
Location:
Posts: 0
Actually, once this is released, I planned on creating a new wad of this to be used on the Wii. I'll be changing all the images, and modifying the manual to coincide with this game and everything. I actually just did that with Zelda Challenge: Outlands. I've gotten rather skilled at injecting roms into wads. The only thing I can see preventing me from doing that would be the size of the rom. If it's too big, it won't fit into any existing SNES wad files, thus making it impossible to do. I've ran into that with other SNES roms I wanted injected, like The Second Reality Project Reloaded (SMW Hack) But yeah, if for some odd reason I don't notice when this gets released, just shoot me a PM, or find me at a possibility of 2 different websites, one being PureZC, and the other being Wiiso. I go under the name Angeal at both places, so looking me up wouldn't be so hard.
Jul 20, 2010 at 6:55 AM
M
mysticalos
Lurking in the Shadows

"No! Don't OPEN that DOOR!"
Join Date: Jun 18, 2010
Location:
Posts: 0
Age: 40
Personally i wish nintendo would just buy up all the greatest zelda hacks, then release a nice DS cart with them all on there. that'd be quite the profit horse. Plus give reward to hackers that made amazing games. Granted nintendo would make out the biggest and only small sums go to the hackers for their works (if nintendo even payed them at all). but just knowing your work was out there as mainstream like that would be a good reward in that of itself.

"No! Don't OPEN that DOOR!"
Join Date: Jul 27, 2009
Location: New Jersey/Italia
Posts: 0
I am very glad to see the update and some new screens. I am very awestruck by the commitment of seeing a new Zelda. Great things come to those who wait, and though I can not help as I wish I could, my spirit is willing to give the boost and inspiration you need to succeed.

Carry on Warriors of Zelda!

"No! Don't OPEN that DOOR!"
Join Date: Jan 17, 2009
Location: U.S.A.
Posts: 0
I&#8217;m writing here because I need help. In Hyrule Magic (HM) there are two different sprite lists. If I&#8217;m on the overworld map and I select the sprite box then right click on the map I get a list of sprites to choose from. But apparently if I go to file then properties it will bring up box with the option of Normal and Special. Apparently if I select Special I get to use the second list of sprites. Does anyone know how I can access the second list of sprites in HM because every time I try it, it does not work.

I just want to let you guys know. GM gave me an assignment to work on and I&#8217;m capable of getting it done. I&#8217;ve already started and I&#8217;m picking it back up tonight. I plan on working on this pretty hard this up and coming week, hopefully getting it done. I still need to know how to access the 2nd and much shorter sprite list in HM but I&#8217;m going to be working around that for now. I&#8217;ll just fill in the holes after it gets figured out.

ask your question there, you should get way more feedback. or ask seph at www.parallelsequel.wordpress.com , maybe he knows too.
Aug 16, 2010 at 8:58 PM
E
Erockbrox
Lurking in the Shadows

Here is my progress:

And I plan on doing a bunch today.

I think I finally figured out the solution to my problem previously stated, so I&#8217;m happy. I think I got it all worked out.

I almost worked the whole day on this thing.

When GM took on the challenge of creating a fully complete and original Zelda3 hack he really took on a lot!

There is so much work that goes into this stuff, seriously.

I'm still going to do a few more tonight. 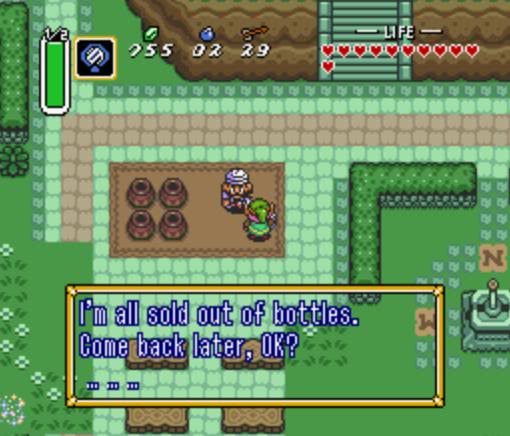 I was working on GM&#8217;s assignment and I came across the bottle guy.

I want you to take a minute and read what he says.

This is so funny because he tells you to come back, as if he would have more bottles to sell at a later time. But we all know that he never sells you another bottle period! It is so misleading.

"No! Don't OPEN that DOOR!"
Join Date: Nov 8, 2006
Location:
Posts: 0
Hahaha! That cracked me up. Anyway. It's nice that you get to help with the project. Keep up the good work Erockbrox!
You must log in or register to reply here.
Share:
Reddit Pinterest Tumblr WhatsApp Email Share Link
Top