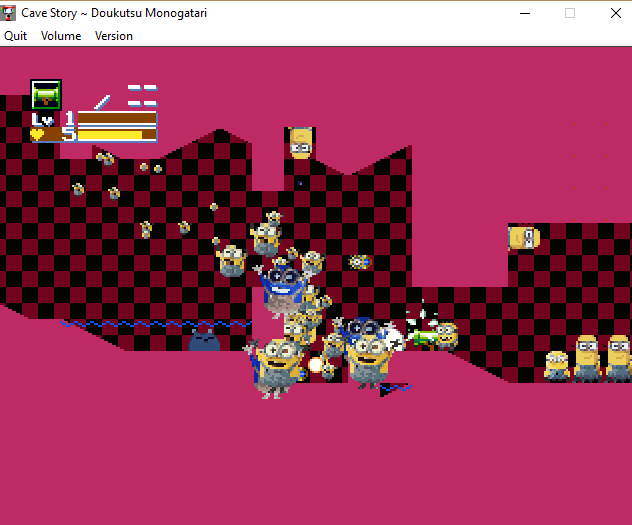 "Big Joe Tire and Battery Restaurant! Opening Soon! Eat at Big Joes!"
Join Date: Mar 26, 2014
Location: Somewhere with Wi-Fi
Posts: 541
Age: 25
1: The weapon was satisfyingly destructive. Only if there were more than one boss that could handle its firepower.
2: Really neat, though I wish it were possible to explore inside the houses given how low your jumps are. One must wonder how mini-Quote was able to get Chaco's Lipstick...

3: Very original. I like how your sword slash becomes a spin if you attack while in the air. It's honestly a shame that there isn't more to it. The only odd thing about it is that you can slash your sword even after you die by falling off the screen.
4: Similar to 3, yet with some updated graphics, a clank whenever your projectile hits a wall, and the removal of the mid-air spin slash. It would have been better if you changed up the music a little and worked on the enemies' sprites, but it was still impressive even if it was shorter than 3.
5: A real work of art, plain and simple.
6: Rather buggy and incomplete, even for a mini-mod. The level 3 Gun sounds less like a gun and more like the level 3 Polar Star, you turn into a minion when you drown, and you can't even leave the monster-filled room once you fight your way to the end.

"Fly, Fly, Fly!"
Join Date: Jun 8, 2012
Location: CHRISTMAS stuff in August. WTF.
Posts: 145
Age: 26
I loved #3! It was very fun with that good old-school challenge, and I personally liked how #4 looks. It's got great potential, and it's graphically pleasing to the eye.
If I can figure out how to make a CS hack or mod by myself, I'd be damned. I can test everyone else's at least!
I'm damned now.