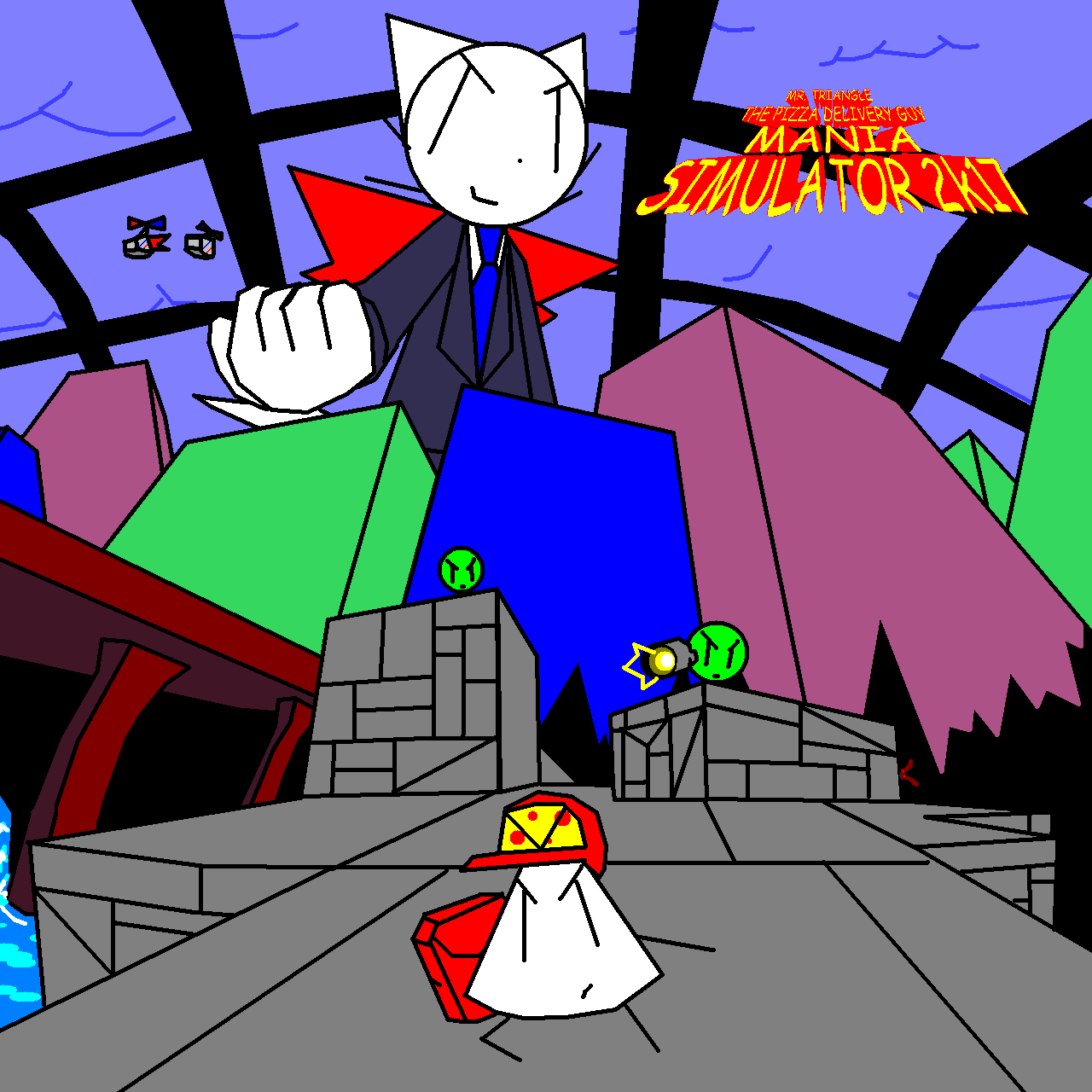 This is a really stupid joke platformer game I put way too much effort into. It's a sequel to the first games I ever made, Mr. Triangle 1-5 (6 was never finished) and is partially based off a dream I had.

Plot:
The best video game character of all time, Mr. Triangle, gets his world taken over by my edgy oc for no reason, and decides to become a pizza guy.

Features:
-SUBLIME graphics MASTERFULLY created in ms paint Game Maker's image editor
-"Deep" "Philosophical" and "Well Written" plot (literally every cutscene contains some use of a swear word)
-you can shoot pizza sauce at enemies
-4 stages of platforming action with 3 bosses
-injokes nobody but me and Yacker get
-stupid memes

"Keep on rollin'!"
Join Date: Oct 7, 2013
Location: India
Posts: 472
I have to say, your poster art handles perspective marvelously! Good job! I'll try the game later when I have more time.
I remade the font in CaveStory+ as an installable font here.
Also a small deviantart here.

Hatred can overcome despair, but it corrodes the heart in the process.
The process can outweigh the product.
Good minds can remember, great minds can forget.
Kill your anger before it kills your sanity and yourself.
The truly blind aren't those who cannot see, it is those who cannot perceive/understand. (What sounds better?)
Sometimes, looking at the big picture can help you see more detail.
How can humans be complicated enough to fight wars, yet be naive enough to not have peace?
Hard work doesn't always pay, but no work always doesn't pay.
Imagination is what drives reality.
Scars don't show how much you've suffered, they show how much you've endured.
If everyone were a leader, nothing would ever get done.
The best way to live a life of dignity is to throw away your pride.
Freedom itself can be debilitatingly restrictive in its own right.
The destination is just an excuse for the journey.
Being above someone doesn't give you the right to look down on them.
The state should hold as much power as necessary, and as little power as possible.
Jan 1, 2018 at 6:17 PM

"Life begins and ends with Nu."
Join Date: Aug 28, 2009
Location: The Purple Zone
Posts: 6000
I really wanted to finish this but the devil kid fight is just stonewalling me. too many hits to kill, too few mistakes to die, the dash attack in phase 2 seems almost undodgeable. I mean it was cool up to that point but yeah oof ow my shapes

Any feedback would be appreciated, and it's not nearly done yet so I can still change things.


Noxid said:
I really wanted to finish this but the devil kid fight is just stonewalling me. too many hits to kill, too few mistakes to die, the dash attack in phase 2 seems almost undodgeable. I mean it was cool up to that point but yeah oof ow my shapes
Click to expand...

Yeah about that..I got nothin. That boss was complete bullshit and I should've fixed it. All that happens after the boss is you win and the credits roll though so you didn't miss anything.
check out my sikk mod:http://www.cavestory.org/forums/index.php?/topic/6452-mail-story-rdx/

"All your forum are belong to us!"
Join Date: Oct 20, 2013
Location: Florida
Posts: 592
This has such a nice quality to it, you keep faithful to your own art style and just by trailer alone, make this game one of a kind. I'm totally gonna play this alpha demo and wait for the full release because this looks awesome, good work mate!

Tpcool said:
yo is the trailer music original, and is all of it that good

The trailer music is Sunset Town from Sonic the Fighters. None of the music in the game is original either.

At startup or ingame? Was there any error message?
check out my sikk mod:http://www.cavestory.org/forums/index.php?/topic/6452-mail-story-rdx/

"Huzzah!"
Join Date: Mar 25, 2019
Location:
Posts: 206
At startup or ingame? Was there any error message?
Ingame and yes, an error message had appeared.
I don't remember where it happened though.
You must log in or register to reply here.
Share:
Reddit Pinterest Tumblr WhatsApp Email Share Link
Top