Made for Modfest over a year ago, I planned on finishing it and never did.... until now. It's only 10 minutes long if you don't die (you're probably die a few times, though).

"I, Ikachan. The Life and Documentary of the OrigiNAL SQuiD."
Join Date: May 31, 2018
Location: under your bed ;)
Posts: 157
Age: 20
i have no interesting feedback beyond a) enjoyed it a lot, really cheered me up and b) it took me an embarrassingly long time to notice the hat thief's bats were also wearing hats and when i did i almost died because i laughed out loud and distracted myself

"Ha! Ha! Ha! Mega Man is no match for my Mimiga Man!"
Join Date: Nov 21, 2017
Location: hell
Posts: 235
Age: 17
Huh? Hat Story? I'm surprised to see that comeback, mostly because I thought it was a modfest project that was made just as an obstacle course with no real meaning to it, was expecting fire is cool to come back however but hey, if you wanna finish that mod.

Also, there is still Doukutsu Monotogari, should probably remove it entirely except if it's to signify it's Cave Story or something?

Now I'm gonna clarify something, I might sound very harsh but I'm just pointing out things I noticed that aren't very coherent or think they were mistakes/not intended.

-The Booster 0.8 is attached to you but you don't have it in your inventory, it's kind of a bummer, especially since you have the =Air Tank= in there.
-I like the dialogue that Sue implies Quote isn't actually next door. (Also there is some weird 4th wall break througout the mod from Sue? I wonder if this like a continuation/revamp of Noob Story with the role of the MisterMindguy but were the Mistermindguy? idk)

-I dig the level design, the fact that the road of Quote's house has different paths and those will matters later is very cool.
-The forcefield just dissipate with no effects, could have turned it to smoke or just flash the screen with the Spur sounds, that would have been cool. 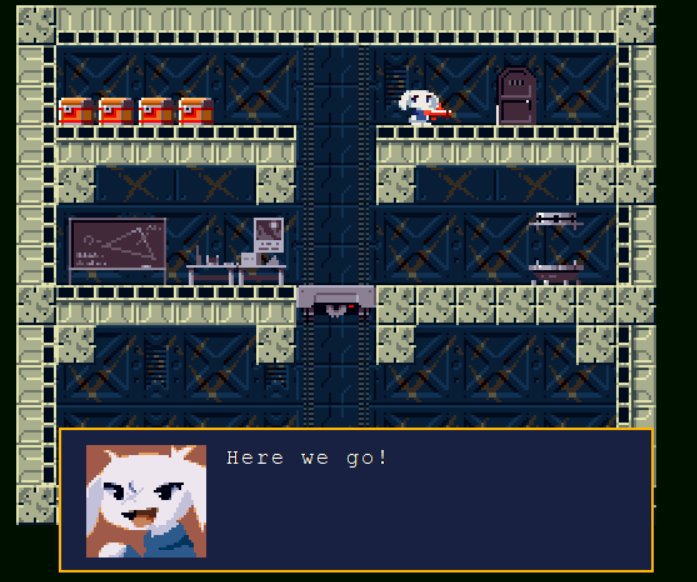 -Oh my that facepic! It seems to have gotten better than in my memories, when I saw that on stream, it was like just a red circle with a white dot in it. Truth be told, I can't tell if I would have done better with such a simplistic design, except if that's suppose to be just his eye and he actually has a head. You could ask me to sprite an eye with Quote's hat on if you want.
After all I owe you one.

(Made a little edit on my side, on where his eye shine.) 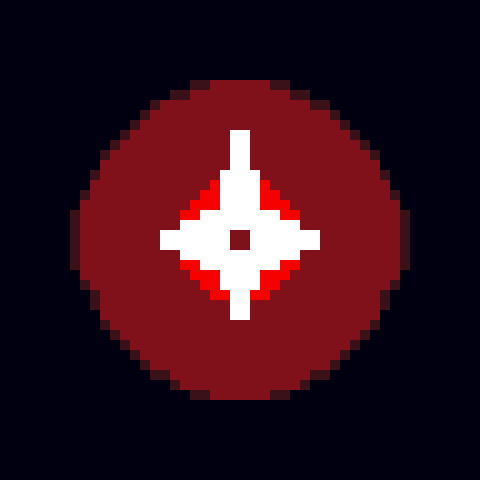 (Alt where the pupil also got shadows/shading) 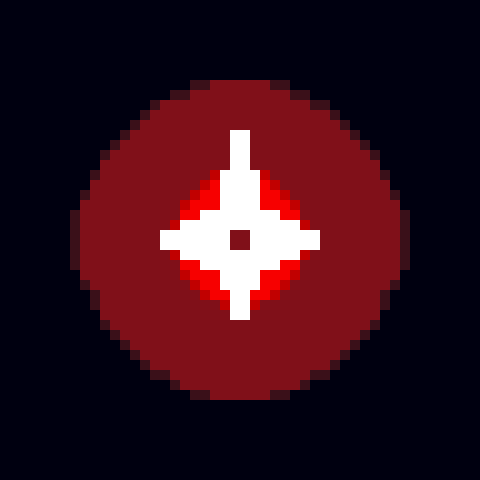 -Simple nitpick, I find it very out of place for a vilain introduction to have him literally tell why he's saying all that; could have done it later or a second time you meet him. I know it's supposed to be funny but the scene is pretty serious from where it was, having that text totally removed me out of the scene.

-This is cute as fuck.

-When you beat the boss, and it fades out, we can still see the hud, it'd be great if it'd dissapear before. (With <KEY)

-Misery being a hat thief is somehow the coolest plot twist it could have been. (Would have been funny if it was Prof.Booster of all persons.)

I'm bursting out of laughter.

It was great! A pretty good continuation to a mod! Didn't feel unneded to say the least.
You always manage to fly past everything with flying colors Dixel and this is another proof of a great mod. Good job!

I got a pretty good kick out of this mod's nonsensical laugh-a-minute gags, especially at the beginning. That first room did a really good job of setting the tone of the mod and creating the silly justification for Sue embarking upon her quest. The level design was pretty good, and the difficulty level was tolerable, except maybe for during the final boss where I ended up hacking my save file with extra health. It was pretty interesting how you kept me on my toes with all of the plot twists, between the reveal of the true hat thief, and the reveal of the true hat theif's true identity. The final boss was creative with the new mechanics you introduced, but the difficulty on it was too high for my taste, which is why I ended up hacking my save file to give myself 200 health instead of getting good enough at it to beat it the normal way.

Seems like you have a pretty solid grasp on the concepts of CS modding and dialogue writing. I feel as if you'd be able to make a pretty good mod of longer length if you invested the time into it.

Not sure if you plan on making any future releases, but here are some glitches or oversights that stuck out to me:

By the way, I have to give you props for a small little touch you made on the technical side. I noticed that the download was a lot more compact than most mods I download, and after opening this mod up in an editor and looking in the files, I see why. It seems that you have deleted all of the unused maps, as well as removed all of the unused backgrounds and NPC spritesheets from the data folder. While this isn't common at all in CS modding, this is generally good practice in game design, so props to you on that front, because this made the memory conservationist inside of me very happy. If you were going to do that, though, why didn't you also get rid of the unused tilesets, along with "MyChar - Copy.bmp" and "StageImage.bmp"?
Last edited: Nov 28, 2021

HaydenStudios said:
If you were going to do that, though, why didn't you also get rid of the unused tilesets, along with "MyChar - Copy.bmp" and "StageImage.bmp"?
Click to expand...

"MyChar - Copy.bmp" is a file that can be deleted, but StageImage.bmp is not. It is loaded when the game shows the "Loading" text and *will* crash if it is missing.
The "surfaces" required to start the game are as follows (in no particular order):

"All your forum are belong to us!"
Join Date: Jan 15, 2017
Location: Northern Hemisphere
Posts: 551
Age: 14
squid game?
i like walruses also i am going to maybe be a tree when i get older i think trees are pretty neat
but i still want to do other stuff trees can't
like not be a tree

What on earth does Squid Game have to do with this mod? Also hi Walrus_Guy, haven't seen you in a while.

"Wahoo! Upgrade!"
Join Date: Jun 9, 2018
Location: Momorin's Hideout
Posts: 46
Age: 18
Thanks for the feedback, everybody! This mod was a bit rushed for modfest, which is the main reason for things like the Hat Thief's design and the lack of interaction with background objects. I had 3 days to do it, and got everything before the final boss complete. It was so darn close to being done, so I decided to finally finish it almost a year later. It really feels great to be able to say that I've truly finished a mod, even if it's short. Maybe I'll update it in the coming weeks. Fixing the stuff Hex and Hayden have mentioned, a little more optional dialogue, an Easy Mode and Hard Mode, that sort of thing.


To Hex: Thanks a bunch for the facepic. May I use it for the update?

To Hayden: Yeah, the boss might be a bit too hard. It's gotten a little repetitive seeing carbon copies of vanilla fights in mods, so I wanna really shake up all the bosses in my mods. However, I may have gone too far to make this one unique; the fish missiles in particular are kinda mean. Question: How often did you die from running out of ammo/ground, compared to dying from the Hat Thief's attacks?
Also:

HaydenStudios said:
What on earth does Squid Game have to do with this mod?
Click to expand...

"Life begins and ends with Nu."
Join Date: Dec 31, 2011
Location: United States
Posts: 2097
Age: 25
Oh, I forgot about that line. Haha, I think I see what's going on here. When you wrote that line a year ago, you were referencing Ikachan. But anyone who's played this mod within the last few months will, undoubtedly, associate it with Squid Game.

As for that last boss,

I think my main bottleneck was my limited ammo more than anything, which resulted in me saving all of my ammo for attacking Misery instead of shooting away the missiles and hat bats. The disappearing ground didn't bother me. I think what would be nice would be an opportunity to refill your health before beginning the battle (since I didn't have full health and had already used the life pot when I got there), and also if the ammo refills gave you more ammo. Most players probably wouldn't use the extra ammo to drain Misery's HP more quickly, but rather to get rid of the bats and projectiles that will quickly overwhelm you if you don't keep them under control.

Of course, you could instead reduce the amount of enemies/projectiles that come at you, but that would make the battle less interesting. I think you have the right idea with what you've implemented, you just need more ammo to make the battle more well-balanced.