bobbyis said:
EDIT: NOXID IS A SMEGLORD AND SO ARE THE FORUMS RULES. THANK YOU FOR YOUR TIME
Click to expand...

If Monster X isn't a catboy, I'm going to flip a table.

Captain Fabulous said:
He's saying no, he won't add non-dudes to the dating sim. He wants to make a gay dating sim, and he's not going for mass appeal, so I don't think he needs to add tits.
Click to expand...

are you new to the internet, fab?

yanderesunflower said:
Bingo! And a few friends. and probably some people out there who didn't know they wanted this
Click to expand...

I'll def play whatever the first version you put out is! Hit me up if you want someone to playtest a really rough version before you wanna put it out the public, I know how stressful that can be D:
Jan 27, 2015 at 12:37 AM

Did you honestly expect anything different from me?? (Not just a catboy, but a Megane-Mechanic-Kinda-Tsundere-Catboy!!) 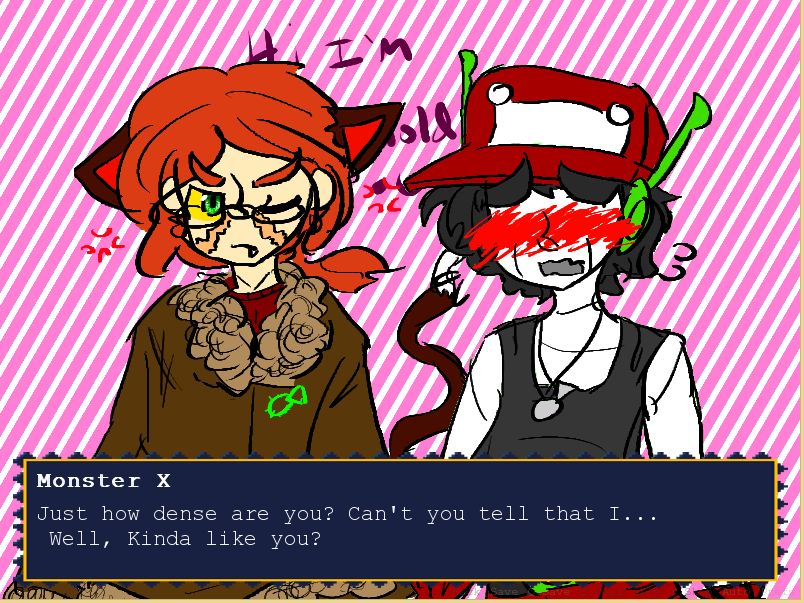 everytime i draw quote their eyebrows get progressively larger and more powerful, should i be alarmed

I'll def play whatever the first version you put out is! Hit me up if you want someone to playtest a really rough version before you wanna put it out the public, I know how stressful that can be D:
Click to expand...

Oh gosh thank you!! I'll probably take you up on that, I'm definitely lacking playtesters!!

"All your forum are belong to us!"
Join Date: Apr 6, 2014
Location: a bathroom
Posts: 620
hey man, i'd really love to playtest too, especially with all the guys in the game

Oh gosh thank you!! I'll probably take you up on that, I'm definitely lacking playtesters!!

I'll PM you with contact info, since I don't use the forums too often nowadays

Some discussion and links to certain social media have been making the rounds and I have come to the decision that, aside from various other evidence and suspicions, this sort of content isn't really appropriate for the site. It's been more trouble to deal with than it's worth in the past and that's definitely going to be the case here as well. If you want to continue with it, you're welcome to do so elsewhere, as the people interested in roleplaying did. As you've probably noticed you're not going to generate a whole lot of positive press here anyway.

This is not up for debate, I'm not having this turn into an ever-growing mess that I'm going to have to end up cleaning regardless.

Alright I think that's long enough to have everything settled down.

To be a little clearer, this was not an issue of sexual correctness, it was done to avoid rapidly-brewing drama and the same sort of creepy/annoying fandom elements that have been looked down upon in the past (not to mention social media-type nonsense). It doesn't take a genius to figure out that having this here isn't a good idea. I'm also still investigating the possibility of a second account being involved, which obviously isn't allowed.

I suppose this could be unlocked if it's really wanted then? There doesn't seem to be much more to say at this point.
I'm an admin c: