"It's dangerous to go alone!"
Join Date: Jan 20, 2019
Location: Somewhere on the Surface
Posts: 37
Basically, just post your worst, cringiest, most idiotic Cave Story hack ideas.
i don't know anymore
I'm not a staff member, but for the love of God, please do not exceed 200 pixels in height for your sig. 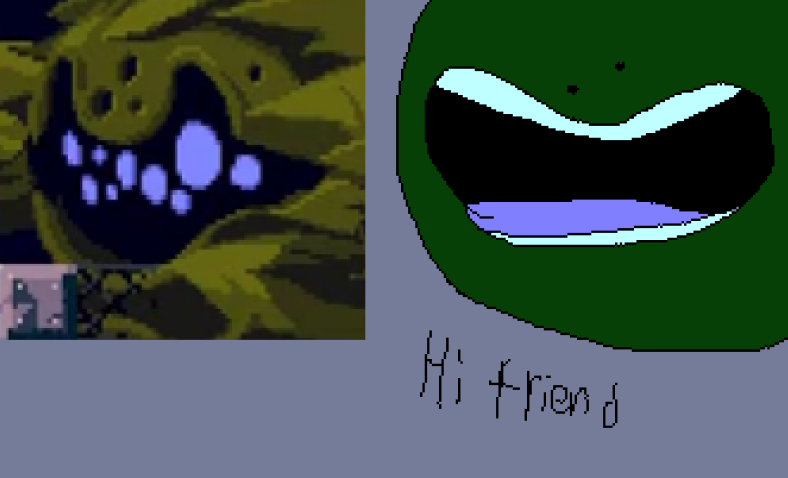 "Keep on rollin'!"
Join Date: Jan 10, 2014
Location: yes
Posts: 459
Age: 18
having a dynamic playersize hack where 4 separate characters have different rects and entity hitboxes and have different physics/sounds/abilities.
although the player customization hack is already a thing, i believe that this is possible.

"That dog!"
Join Date: Apr 5, 2013
Location: In my mind and of my body.
Posts: 1637
Age: 24
A mod where white people control assembly and black people control level design in a meta-mod that knows it's a mod.

There was going to be some joke with Serri in it and something about MaGCSL, and how Nelson can't attend in the contest because he has to ASM hack and can't level design.


That and Cave Story Omochao Edition (like Sonic 1 omochao edition)

This is a bridge we must never cross "It's dangerous to go alone!"
Join Date: Jan 20, 2019
Location: Somewhere on the Surface
Posts: 37
Sorry that I could not tell you earlier, but ideas for stories are also allowed.
i don't know anymore
I'm not a staff member, but for the love of God, please do not exceed 200 pixels in height for your sig.

2DBro said:
isn't this thread about hacks not mods
Click to expand...

I'm confused.
If there is a difference, then mods are allowed.
i don't know anymore
I'm not a staff member, but for the love of God, please do not exceed 200 pixels in height for your sig.

"Wahoo! Upgrade!"
Join Date: Jun 9, 2018
Location: Momorin's Hideout
Posts: 46
Age: 18
A mod about two narrators, one looks like Curly Brace and one looks like human Sue, who take turns making up a story. You play the story they make up, and in between levels you see their conversations. Not-Curly is the xd memester, and Not-Sue is the dark snarker.

The two go back and forth and change the story once you get through a section (ex. getting the Not-Sue-influenced Bloodstained Locket before going back into Mimiga Village, which Not-Curly turns into BonziWorld). It starts out as a CSBD, but by Egg Corridor the level design is completely original. As the mod goes on, Not-Curly becomes less xd and more sinister and you learn more about the narrators' real lives, and the story they create becomes more symbolic in nature.

After 1 or 2 hours of this, you find out that Not-Curly is a personification of Not-Sue's fears and insecurities, and Not-Sue has been alone in her house for years, talking to her imaginary "friend." The final level ends with you a hopeless boss fight against a symbolic version of Not-Sue's hatred of herself and the world, and the mod ends with Not-Sue strangling Not-Curly before watching as the entire world crumbles around her.

I only got the first room done, then realized I was not willing to put in nearly as much effort as was required.

On another note, I would love to see someone put at least one of the ideas in this thread (not counting ones that are already released mods) into a mod and actually make it good.

Sequel mods based on the best ending are a bad idea because the good ending is the canonical one that wasn't haphasardly added in because people bitched to Pixel about Cvae Story being a baby game.
Wishlist Harpy Gaiden DX on Steam!
Mar 23, 2019 at 3:12 PM

"Wow! The more I drink of this magical beverage, the more games I can play! Wheee!"
Join Date: Feb 3, 2019
Location:
Posts: 28
Age: 19
Mad Chef Story. A mod about a made chef going around "feeding" "homeless people".
Check out my mod here.
Also I run a YT Channel, Inspector Fliss - YouTube
My Soundcloud
I'm active on Newgrounds and Reddit as well.
I update everything I do on The Flisscord Server.
Mar 25, 2019 at 3:30 PM

"It's dangerous to go alone!"
Join Date: May 14, 2018
Location:
Posts: 37
Age: 17
I still don't undersand why you're a fan of minecraft story mode
Obtained the crescent medal in Jenka's Nightmare!

"Fresh from the Bakery"
Join Date: Mar 19, 2019
Location: planet earth
Posts: 10
a hack where you can only have level 1 bubbler
minecraft story mode is a rip off of cave story which is a rip off of pong
You must log in or register to reply here.
Share:
Reddit Pinterest Tumblr WhatsApp Email Share Link
Top