"In Soviet Russia, graves keep YOU!"
Join Date: Jul 15, 2014
Location: IN YOUR HEAD, SHIT FOR BRAINS
Posts: 670
Age: 5
lets make august 8th national cave story day because something something in game lore related to curly and the gunsmith and pixel
Not just another one of your plays
You're the pretender
Oct 20, 2018 at 10:47 PM

UltraSUPRA said:
-and a rubber ducky with a tag on it featuring the Nemesis icon.
Click to expand...

Honestly, i'd pay good money for that shit.

Also, this is more of what I'd do for the 20th anniversary, but i'd probably take a picture of me in a Quote costume floating on a raft in my grandparent's pool with a caption saying 'Another ten years comes and goes'
In the summer of 2014 (i lived with my grandparents at the time), i was obsessed with CS, so i'd run around all the time with this water gun that i somehow thought looked like the Polar Star, and i would also swim often because i was moving away in august. Eventually, i'd just play Swim Ikachan and random CS music while floating aimlessly reflecting on my life up until that point (because as all little kids, i was a retarded, pretentious fuck). This is also why it would say ten instead of twenty.
Sep 13, 2021 at 6:50 AM

Plixtty said:
Its so cool to see all the cave story people like my favorite is prolly aar
Click to expand...

Good for you, though you really didn't need to revive a dead 3 year old thread.
Currently developing Project Ampersand

Extra Life said:
Good for you, though you really didn't need to revive a dead 3 year old thread.
Click to expand...

Nerdieo said:
It's pretty rad to see this thread tho, but yeah, probably nothing will happen for the 20th anniversary. A good remake would be rad tho.
Click to expand...

We already have Cave Story Plus. Why would we need another remake?
Currently developing Project Ampersand

Extra Life said:
We already have Cave Story Plus. Why would we need another remake?
Click to expand...

I guess more in the style of 3D. I don't want a 3D Cave Story again, but a remake with more of a style change would be interesting. Besides a remake, I really don't know what else could possibly come from a 20th anniversary.

More merchandising? Or hell, maybe a "Definitive Edition Update" with the CS3D levels added into the 2D game. Or hell, even a PS5 and Xbox Series X port would be neat.

We can't really expect too much for this gen since we already have the game on modern Nintendo hardware.
Sep 15, 2021 at 5:24 PM

"Wow! The more I drink of this magical beverage, the more games I can play! Wheee!"
Join Date: Jan 19, 2017
Location:
Posts: 22
Imagine Cave Story: 20th Anniversary Edition and it looked like this. 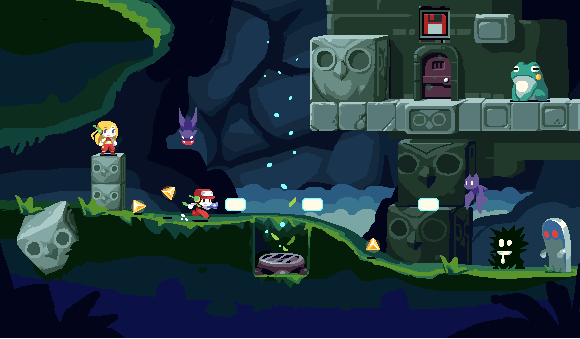 That looks pretty cool. Where is that image from? It kind of reminds me of the glimpses we've gotten of CS ~ Encore.

HaydenStudios said:
That looks pretty cool. Where is that image from? It kind of reminds me of the glimpses we've gotten of CS ~ Encore.
Click to expand...

It's from a digital artist that goes by "Castpixel." Interestingly enough, they WERE hired by Nicalis for a remake, but apparently the game made no progress after they finished some spritework. The story of the project goes REALLY deep, but I won't ramble here, haha.