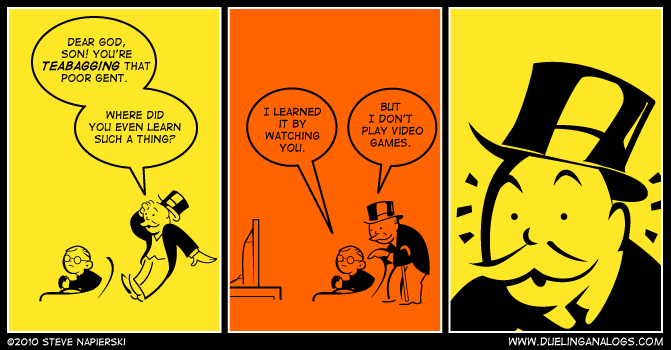 "Life begins and ends with Nu."
Join Date: May 6, 2009
Location: somewhere new
Posts: 2137
Age: 27
Cyanide and Happiness.
Kris is my favorite, and the original artist.
COMICS WOO
You can pretty much read these in whatever order, or spam the random button until you die.

Questionable Content
I like this, it actually has a story, and is pretty hilarious.
You're gonna want to start at the beginning for this one.
the styles change significantly throughout the comic, he gets better and better.

More as I get bored.


Yakkers said:
I'm quite partial to Electric Retard.
And I'll refrain from linking it for obvious reasons
Click to expand...

"Life begins and ends with Nu."
Join Date: Aug 28, 2009
Location: The Purple Zone
Posts: 5998
This is I think my current favourite comic site... thing.
http://thepunchlineismachismo.com/archives/454
There's some continuation from beginning to end. Jared's saga or whatever near the beginning is definitely one of the better bits.
http://thepunchlineismachismo.com/archives/99

Yakkers said:
I'm quite partial to Electric Retard.
And I'll refrain from linking it for obvious reasons
Click to expand...

MetaSeraphim said:
I always wondered, do people use "lol" and "stfu" in real life without saying it out fully?
Click to expand...

Sadly, I've witnessed this, so yes.

Between Failures (read in order)

"Heavy swords for sale. Suitable for most RPG Protagonists. Apply now!"
Join Date: Dec 26, 2007
Location: Lithuania
Posts: 1947
I couldn't be assed to read the whole thread, but I really enjoy xkcd and pbfcomics (they used to make my day).

ragnaroq
Been here way too long...

"can't be assed" to read a thread that's not even two full pages long?

good thing i'm only interested in webcomics so much as looking at them for 5 minutes and determining if i'd take like half a year learning to draw i could do it so so so so sos ososososososo much better
Oh, don't mind me; do go on.

Freefall. Really clever writing and oldschool humour, but also with a lot of interesting ideas about AI's and their place in the future (not really Asimov-y though). YO NEURAL NET GONNA GET PRUNED.

I wasn't gonna mention Pokemon-X again because it hadn't updated for months but as luck would have it it just did so w/e. Ignore the comic date, it's stuck on permanent lag.

Large Bagel is an unrelentingly caustic satire of fangirl weeaboo/animu culture, which also updated since the last time I read it. There's also an animation being made for it.

Lastly, it's not really a comic, but amazingly Secret of Mana Theater is once again in production! Possibly the original flash-based video game parody series, pretty much every episode delivers the goods. With a bit of luck it might even make it to the Upper Land >_>

I used to read 8-Bit Theater too but it's finished now.
I'm an admin c:

CharCole, greatest pokemon-related webcomic ever made!

I'd also like to plug Slightly Damned and White Noise while I'm here:
http://www.sdamned.com/
http://www.wncomic.com/


MetaSeraphim said:
I always wondered, do people use "lol" and "stfu" in real life without saying it out fully?
Click to expand...

"Big Joe Tire and Battery Restaurant! Opening Soon! Eat at Big Joes!"
Join Date: Jun 29, 2010
Location: Hills of Amber, Amh Araeng, Norvrandt, The First
Posts: 512
http://www.zebeth.com/planetzebeth/index.html
Planet Zebeth - metroid-based web comic, and the only one i read regularly.
what i want is a Cave Story webcomic that isn't dead.
I'm afraid your path ends here, because the world cannot rely on you.
Oct 21, 2010 at 12:15 PM