Bobomb says: "I need a hug!"
Join Date: Oct 7, 2011
Location: PrtWeed
Posts: 771
Age: 22
Hey everyone! It has certainly been a while, huh? While life has certainly been bizarre over the past couple of years (thanks COVID), I have used little bits of downtime to work here and there on video game.


As some of you may be aware, freeware Cave Story is DirectDraw-based, which Windows has been "emulating" very poorly ever since Vista instead of running it natively. This has led to several issues when trying to play Cave Story and other older games on modern hardware with modern software, and the issue extends to video game as well (sadly). I don’t even need to tell you that I am not a fan of Microsoft’s current approach to DirectDraw. One solution to this problem is a new render backend... but since I am not nearly skilled enough to make that happen, I decided to go through with implementing a new solution in the form of Cave Story Engine 2.

Thanks to the work of Cucky, Clownacy, and GabrielRavier, the fantastic (previously, thanks to a bogus DMCA) open source decompilation of Cave Story became the base of this new major update. With access to the game’s source code, the floodgates to insane new features and hacks would be blown wide open. It already supported 2x res graphics, new render backends, and custom resolutions - which were three of the biggest features I wanted - but I had a new problem. The Shotgun from video game deluxe was an assembly hack (by Noxid), and that was not going to be nearly as easy to port over. I enlisted the help of BLink, and within a couple Discord calls, he had the Shotgun written in C – completely identical to the original assembly code… but I didn’t want to stop there.

When I started working on video game deluxe, I knew that redoing all the graphics was a huge undertaking – but that was not nearly enough content to warrant a whole new revision of the game. So, I decided to also add a whole new challenge, characters, and weapon to make the update feel more complete. In this fashion, I’ve also spent my time creating a new challenge mode called “Tectonic Tower,” as well as overhauling the existing Hard Mode into Insane Mode and adding Classic Mode for all those diehard video game classic fans. This major release is, by far, the definitive version of video game, built for modern hardware. Not to mention, I’ve also implemented new characters like 2dbro’s Headman and the fan-favorite Quote Nukem from WTF Story. There are also plans for even more new official content, including new maps and a new ending… but those announcements will have to wait until another day. Until that day comes, please enjoy video game+!

Version 3.0.0 has been released. The most notable changes are listed here:

"Life begins and ends with Nu."
Join Date: Dec 31, 2011
Location: United States
Posts: 2201
Age: 25
Congrats on the new release, Aar! Sounds like you've really put a lot of work into this, which is commendable given how hard it becomes to set aside time for projects like this once you get into your late teens. I've never played this mod/fangame, but I might at some point in the near future. This is starting to be a pretty darn elaborate and long-running project.

"It's dangerous to go alone!"
Join Date: Aug 11, 2017
Location: The Path to World Domination
Posts: 34
Age: 19
voice in the video is brayconn talking to kate, i was just vibing in the vc 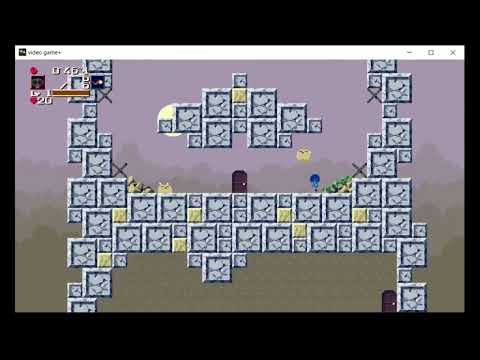