Reason why The Doctor wanted Sue

Mixer8421 said:
Wow
Doctor is a human
Sakamotos are too
Click to expand...

Ha,ha, very funny.
If I can figure out how to make a CS hack or mod by myself, I'd be damned. I can test everyone else's at least!
I'm damned now.

Shimmyzmizz said:
And if he had blue hair, some would say that he was Itoh's brother.
Click to expand... 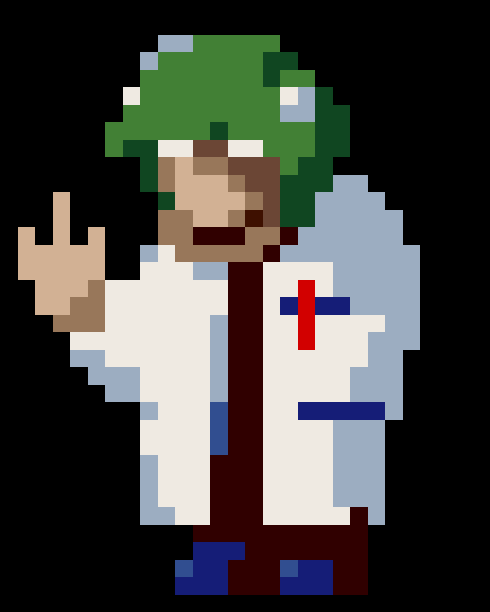 ...Fuck.
check out my bad mods

ShinyElectricBlueTiger said:
You know what, due to their small, childlike size, that's probably a reason why the Doctor wanted all of the mimigas too.
Click to expand...

A pedophile AND a furry?

I never knew the doctor was such a sexual deviant

GIRakaCHEEZER said:
Clearly the reason the Doctor wanted Sue is because he is a pedophile. Why else would a grown man want a 12 year old?
Click to expand...

14, actually. I had Cave Story dreams before it was released. (To be specific, 3 years.)
Not jokin´. Not even a little.
If I can figure out how to make a CS hack or mod by myself, I'd be damned. I can test everyone else's at least!
I'm damned now.

Was it because he thought she would reveal the Doctor's plans (like previously stated)?
Sounds like a good reason. Although... even though Sue had plenty of time to reveal the Doctor's strategy to King and the others; she did not tell them until she was locked in a cage and staring at King for some time...

Another reason the Doctor would be interested in Sue... Is she is a human... turned Mimiga. That would make her the perfect subject for his experiments. Seeing as the Red Crystal was designed to work on humans. Perhaps she was the final component he needed to figure out how to make the Red Flowers work on humans.
Or perhaps he just wanted to see if humans turned Mimiga could be used like regular Mimigas [the red flower]. And besides any mad Doctor would be overjoyed with such an unheard of specimen. (human turned Mimiga...!?)

But... there is the matter of Itoh? I guess he ran away as well? Perhaps the Doctor got what he needed from Itoh already? Or Itoh is just too good at hiding (although it seemed awfully obvious...)


Finally, maybe Sue had been sabotaging the Doctor's plans, or just plainly pissed him off xD Sue would probably smash his foot, make a face and run... GET HER!#$^&

Something to think about... why did Itoh and Sue get turned into Mimigas, and not the others?
Did Sue do something...? Also, I wonder when Itoh and Sue got transformed... Was it before Momorin got thrown off the cliff, and Booster and Kazuma were put in jail?

I wonder what were the events leading up to Cave Story...
Thinking more about it.. I wonder if the Doctor suddenly snapped? He had been drawn to the Crown and had the humans working for him. But, suddenly he decides they are of no more use?

Back 10 years ago, did something similar happen perhaps...? Robots invade the island, Miakid gets the Crown, then suddenly at one point the robots all end up dead...? Did he betray them too?

What a treacherous crown D:

Wonder if it could be related to the original curse? When the King turned on Ballos even though he had been helping his kingdom? That would be the kind of curse that would make sense for Ballos to maybe accidently pass on...

I'm just reaching probably, but it's been a while since I thought about CS xD
It could just be in their nature to begin with and nothing to do with the crown... But, still...

We have had nary a knowledge as well on why Misery really likes to turn people into mimigas.
I have a simple theory for this one:
It may not be that Sue and Itoh are SUE and ITOH. It's because they're MIMIGAS.
The Doctor really don't want the mimigas to go "Hey these guys ran away and nothing happened" and so the Doctor sought to set an example of what happens to escapees.
Of course, this really don't explain why Jack and Mahin are sent into the jail cell either, but it appears to me that that is the initial location that Misery's bubble will transport people to, and then after they (either the shovel brigade or Doctor himself) examined them and deem them fit to work then they will be sent to the normal living quarters. Jack is either taken away for work or either rebellion, and Sue taken for rebellion. Mahin stayed there because he is a fat-ass and Quote left there because he seemed dead.

And also with people who inquire what why Sue was taken to the Doctor, she may just be stuffed somewhere in a jail cell at the plantation all along and only teleported to Misery as hostage.