"Life begins and ends with Nu."
Join Date: Aug 28, 2009
Location: The Purple Zone
Posts: 5998
This is something I whipped up in Java and then subsequently put off working on for several weeks. It's similar to CE's TSC parser but it also can show you if you're running out of text on a line, and highlight redundant commands after an <END or such. You can also load the mapdata from an executable (Untested with Sue's) as well as an extracted and shrunk .bin format that I am using in my new engine. There is a find feature that's pretty much all carrotlord's doing and a picture of a cat with some yarn.
And like, hey, it'd even work on a mac (in theory).

Oh, also I should mention, there is a sort-of major change. You see, in order to make the text replacement gimmick feasible, the program will now save two copies of your scripts: One, the .tsc file, cypher'd with all word replacements and good (hopefully) to go with the game, and the "Script Source" file, a plaintext file in the ScriptSource subfolder of wherever the original tsc file was. The ScriptSource is saved exactly as it appears in the editor, without keywords replaced. Opening either the script source or the original TSC file should work the same way. When you release your mod, you oughta delete all ScriptSource folders before you make your zip... 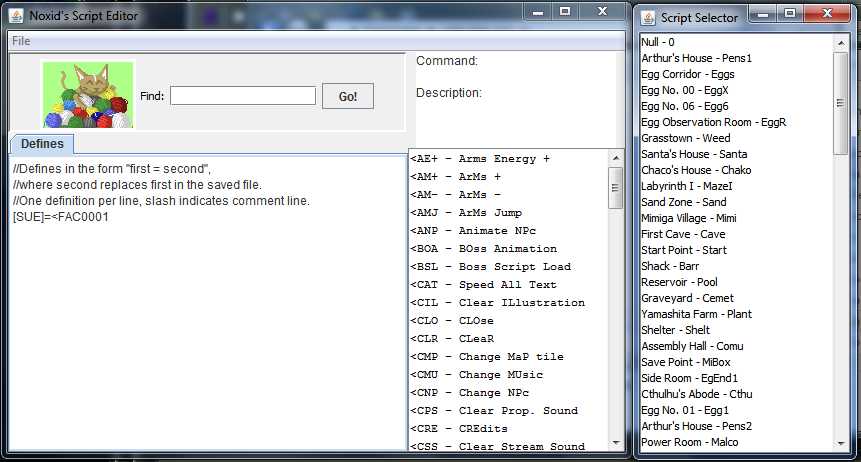 V1.2.0.0 adds:
The ability to load stage.tbl from Cave Story+ for use as a stage list
Fixes a scrolling issue that may have been introduced by V1.1.1.0
Defines should now not corrupt your script files if they are a different size than the text they are replacing.

V1.1.0.4 adds:
Keyboard shortcuts for menu items
Ability to generate a listing of all flags used by your mod, and where they are used
A search button that actually works
TSC command listing on right updates as you type to show you relevent information on the command you are working on

V1.0.0.3 has a tsc_list.txt without all my custom commands
and also fixes a small error with the default define pane dialogue
("first = second" should have been "first=second").
Functionally equivalent to 1.0.0.2

Please report if you have any bugs, errors, etc.

"The Ultimate Sword of Extraordinary Magnitude"
Join Date: May 28, 2011
Location: Australia/Scotland
Posts: 281
If this was food I would say Om nom nom... unfortunately it's a script editor. But also a bloody good one! I really like the feature of being able to have more than one script editor. Is this compatible with Cave editor?
I've failed my Mathematics Exam so many times now that I've lost count.
Mah Deviantart page

Bobomb says: "I need a hug!"
Join Date: Sep 6, 2009
Location: The Balcony
Posts: 852
Age: 27
This is pretty awesome Nox. Its really good to know how much text fits in the speech box instead of just guessing.

Oooh and have a nice vacation

Hey, Yeah, YOU! I make Remixes of video game songs and also original music, There's some cool Cave Story stuff to bop your head to aswell!
www.Youtube.com/StereoPixelMusic
Aug 8, 2011 at 12:11 PM

"Life begins and ends with Nu."
Join Date: Jan 4, 2008
Location: Lingerie, but also, like, fancy curtains
Posts: 3054
@Kick Ass, yes it is compatible with CE. it also works with Sue's but I dunno how many people use that buddy any more.

Hey, Yeah, YOU! I make Remixes of video game songs and also original music, There's some cool Cave Story stuff to bop your head to aswell!
www.Youtube.com/StereoPixelMusic
Aug 8, 2011 at 7:36 PM

Cultr1, are you sure you can't run the JAR directly?


Oracle said:
Because Mac OS X ships with the Jar Launcher application, the end user needs only double click on the jar file and the application will launch.


Edit: Holy shit I have a lot of posts. That wasn't related to the topic at all.

Lace said:
Does the dialogue actually change when you switch operating systems?
Click to expand...

andwhyisit said:
Permission to host on the site?
Click to expand...

Yes, but I would prefer to wait until I have the "complete" version finished. There are a few major features this is missing, namely a #define - like macro thing, and an ability to load a cave story .exe to bring up some kind of listing of tsc files by stage name to pick from. If anybody has other ideas or suggestions feel free to mention them, I figured that I might as well put it out for some feedback while I am still in the process of adding to it, rather than somebody having a good idea and me going "no wai" because i have things at a point where *I* am satisfied and don't want to do it anymore. Please note that doesn't mean I now have to implement everything you mention, I'm just a smidge more apt to this way.

"Ha! Ha! Ha! Mega Man is no match for my Mimiga Man!"
Join Date: Sep 7, 2010
Location: Outside your window. No no, don't check, it's okay
Posts: 272
Age: 27
Looks awesome, but on my (linux-running) computer it says it's missing tsc_list. And it doesn't seem to be able to open any files.
EDIT: And the kitten image doesn't load up. Hmmm.
[quote name='Henry David Thoreau']Let your life be a counter friction to stop the machine.[/quote]
Aug 9, 2011 at 5:34 AM
C
Carrotlord
Not anymore

jed37 said:
Looks awesome, but on my (linux-running) computer it says it's missing tsc_list. And it doesn't seem to be able to open any files.
EDIT: And the kitten image doesn't load up. Hmmm.
Click to expand...

In order to fix this, you should create a bash script (name the script file anything you'd like) and paste in the following:

As a linux user, I probably should've known how to fix that.
[quote name='Henry David Thoreau']Let your life be a counter friction to stop the machine.[/quote]
Sep 7, 2011 at 3:37 AM

"Life begins and ends with Nu."
Join Date: Aug 28, 2009
Location: The Purple Zone
Posts: 5998
So hey I updated the OP with a new version that has MORE FEATURES

I am calling this, "V1.0.0.2" and additionally the source is free for having now
If someone else can confirm that it works fine then Andwhy can put it on the tribute site

Also, I did a thing that maybe hopefully means linux users won't have to use a hack to run the program properly. Or maybe it'll just cause it to not work at all?
I don't know! :eek: