"Fresh from the Bakery"
Join Date: Jun 21, 2021
Location:
Posts: 3
Hello, haven't been here for a long time.
I apologize in advance if the mod I'm looking for is listed somewhere, I've searched all over the forum/google and I couldn't find it.
With that being said, I'm looking for Cave Story Redesign? I believe I came across the mod somewhere between 2011 and 2012 here. Is it still alive? Or did it die? Anyone can share the latest version? Thanks!

"Fresh from the Bakery"
Join Date: Jun 5, 2021
Location:
Posts: 3
I heard that the Doukutsu Uploader died a few years back- did anybody manage to compile some of the mods on there and maybe store them in a discord repository or something? Would love to find some of these old mods.
Jun 27, 2021 at 10:36 PM

Serri said:
An anonymous person (unless their name was written in plain sight but nobody here can read Japanese) created an archive of files uploaded to Doukutsu Uploader called Cave Shelter. The latest is from 6/29/2010, sadly.
Click to expand...

It's split into two archives. Everything after 2010 is found on this link.

I currently own and administrate a Discord server primarily focused on modding Cave Story.
To download any of my mods, all you have to do is choose a host:
Doukutsu.Club ~ Dropbox ~ Google Drive ~ Mediafire ~ Mega.nz
Aug 8, 2021 at 8:15 AM

"Fresh from the Bakery"
Join Date: Nov 19, 2020
Location:
Posts: 5
First off, how the fuck did I not know of openCS' exitance until now

Second off, where can I download it? Anyone have a link to the latest version? I know it was last updated in 2017, I think, but still, I really want to try it out.

"Life begins and ends with Nu."
Join Date: Dec 31, 2011
Location: United States
Posts: 2236
Age: 25
Glad you found a working download link. If there wasn't one, I could have given an upload link. Yes, I agree that openCS is a really good mod.

In the future, instead of starting a new thread, you can ask questions about dead mods in the "Mods general discussion" thread (I wouldn't be surprised if DT moves these posts there once he comes online).

"This is the greatest handgun ever made! You have to ask yourself, do I feel lucky?"
Join Date: Feb 4, 2015
Location: Mimiga Island
Posts: 102
Age: 17
I was given a download link by ilikebreadtoomuch a few weeks ago when told it used an inventory teleport system (which I ended up using a similar system in 100 Worlds)
aware In Denial already found a download, but for others who might not know of where to download it, here's the download link Bread gave me

"What're YOU lookin' at?"
Join Date: Apr 23, 2013
Location: Purgatory
Posts: 1036
Age: 24
At this point the link I've posted previously that includes every single version of the mod (including both the latest v0.6 and the more stable v0.5) should probably be added to the OP of the original OpenCS thread because it's a common question.
Last edited: Aug 9, 2021
I currently own and administrate a Discord server primarily focused on modding Cave Story.
To download any of my mods, all you have to do is choose a host:
Doukutsu.Club ~ Dropbox ~ Google Drive ~ Mediafire ~ Mega.nz
Sep 30, 2021 at 4:58 AM
T
Tanooki Jumpman
Neophyte Member

"Fresh from the Bakery"
Join Date: Sep 15, 2021
Location:
Posts: 4
I don't know whether this mod was a prototype that was turned into another project or if it was even released. Here is the YouTube channel (Aar) the mod was featured on. 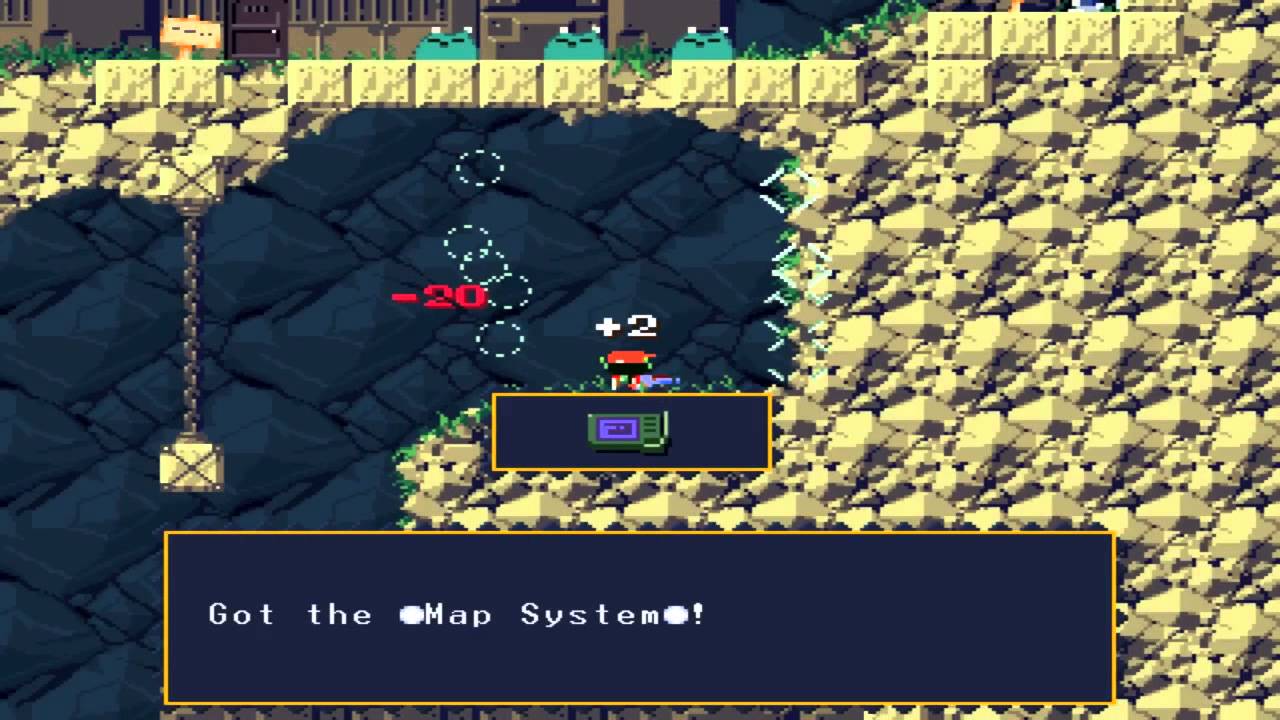 DoubleThink said:
There's no record of it getting posted here in the archive, I can only presume that maybe Aar or someone still has it
Click to expand...

I did put in a bit of work a bit on an upscaled Rave Story HD (of which Polar supervised) but it never was finished. If you want to play what was completed, here it is. Bear in mind this upscale was 4 years ago.

"Life begins and ends with Nu."
Join Date: Dec 31, 2011
Location: United States
Posts: 2236
Age: 25
Someone brought this up in a profile post, but I think it's just as if not more appropriate to outline my thoughts on Jenka's Nightmare in this thread. After hearing from some newer users in the modding community that never played Jenka's Nightmare, it only just occurred to me that a large chunk of newer users in the modding community haven't ever played Jenka's Nightmare. This almost seems weird to me, because when I joined, JN was the flagship CS mod that everyone had to play, the mod that outlasted just about every pre-2010 mod in its relevance. I guess it's not surprising that this would fade to some extent over time though, given that there are so many more mods around now than there were 10 years ago, and that there have been so many advancements that have been made in the modding community. Jumping ahead to now, I don't know if there really is a strong consensus on any single "flagship mod" that everyone has played. At this point, it's probably more that we all just have our own list of personal favorites. I always liked Jenka's Nightmare, but it was never my favorite (WTF? Story was always my favorite).

The last time I played Jenka's Nightmare has to have been at least a good 8 years ago, maybe even longer. It would definitely be interesting to re-play the original Jenka's Nightmare after all these years and all the advancements we've had in the modding community. There are so many aspects of the mod that felt so new and amazing at the time simply because it was the first to do it, but I'll try to give as objective of an analysis as I can, for those who have been wondering what it's like.

Overall, it's a very polished mod, with decent level design, exploration, and story progression. I think the mod's biggest strength is the exploration of familiar areas presented in a new way, and the new boss fights that are obviously re-sprites of existing enemies but nonetheless presented in a creative way that feels fresh. Apart from a few plot holes, I think the writing is very good, and the mod is very engaging by showing the development of our beloved characters based on their growth from Cave Story and believably depicts some of the personal struggles that they are likely to experience in the aftermath of the good ending and the newly unfolding events at the beginning of JN. I felt that the characters were all represented pretty well with the exception of Misery, who for some reason is deciding to take some resentment out on you (Quote) when you first meet her despite the turn of events at the end of the previous game.

The mod's biggest weakness is probably that Shmitz seemed to be going for a sort of "bigger, badder, and darker" feel to the mod, which had mixed results. On one hand, going back to the writing, I felt that the concept of Genesis and Oblivion causing all of the imbalance was a very enthralling concept that gave every moment of the mod a sense of urgency and had the potential to set up a really epic final boss if it could be done right (sadly, we didn't get to see if that was the case, since the mod was never finished). On the other hand, this was used as an excuse to make all of the rooms larger, which didn't always work for me. In general, making your maps too large is bad game design. In my opinion, if your map is so large that the map system doesn't work in it anymore (which is the case in at least one of the Labyrinth rooms in JN), then that's a sign that your map is too large. Some of the maps in Jenka's Nightmare are just too large and easy to get lost in, and some of the puzzles are too confusing. CS Redesign had this same problem.

In areas where many mods show their limitations due to the lack of desire to ASM hack, Shmitz instead uses the limitations to do something creative. While sometimes it can feel like the mod is re-treading some area or plot point from Cave Story out of convenience, Shmitz manages to keep it interesting with the amount of thought that was put into the story and levels. There aren't a lot of new graphics apart from some boss re-sprites, there's no new music, and no ASM hacks, and at the end of the day, I don't think Jenka's Nightmare is the greatest mod ever. But I think there is one thing about JN that still stands out after all these years, even if you eliminate the "OG Cave Story mod" bias. If you've played enough games, you develop a 6th sense for being able to tell when the creators really put their heart into making the game. And playing Jenka's Nightmare, you can just feel that Shmitz really put his heart into making this mod, and that's something that I think still stands out to this day, despite all of the mods with new fancy hacks that have come out since then.
Last edited: Apr 22, 2022