"Life begins and ends with Nu."
Join Date: Aug 28, 2009
Location: The Purple Zone
Posts: 5998
King's story is a Cave Story prequel mod focusing on King and the Red Flower wars, AKA the Robot Wars. Find out about King's troubled past and the fate of the last man to wear the demon crown.

V0026: Click here!
Mediafire mirror
(it's here for the lulz)

Mac version
The mac version won't be updated so yeah.

For the latest progress and sneaky-peeky information, please visit the development blog
http://n0xid.wordpress.com

This mod is rated T for teen by the NSRB for:
animated blood and gore
violence
mild language
suggestive themes
comic mischief (???)

And, of course, screenshots: 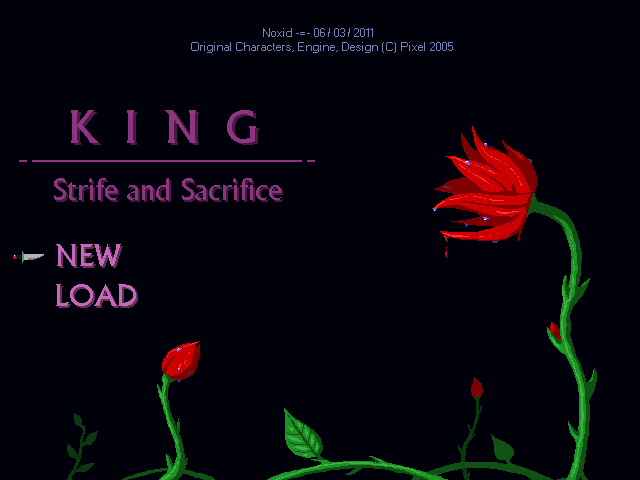 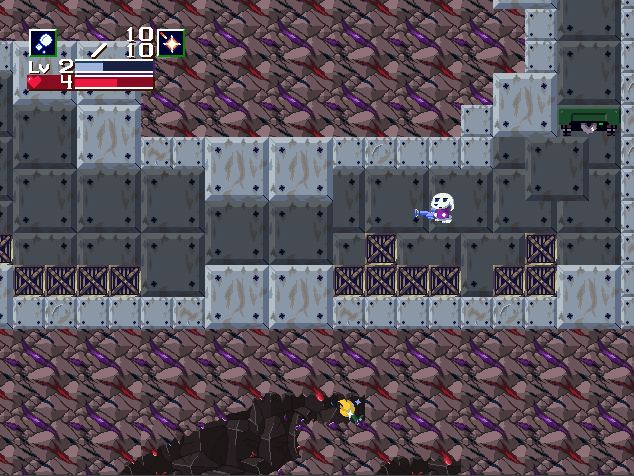 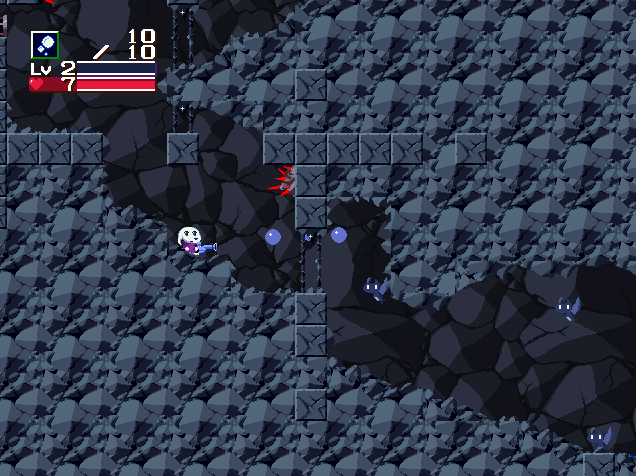 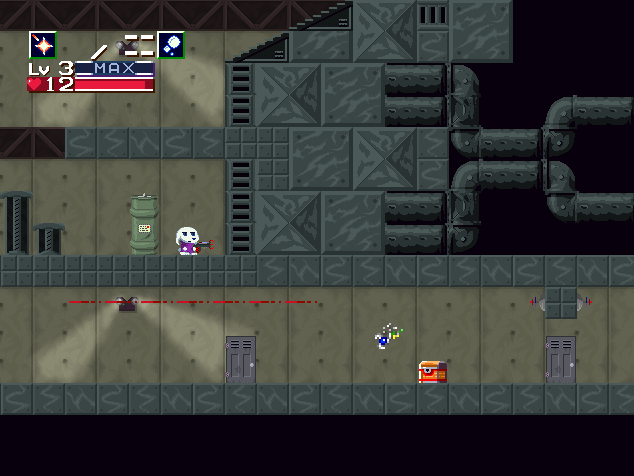 "This is the greatest handgun ever made! You have to ask yourself, do I feel lucky?"
Join Date: Jul 29, 2009
Location: California
Posts: 111
Age: 26
Awesome mod so far Im currently trieng to get the gun from the crazy hermit

"Life begins and ends with Nu."
Join Date: Aug 28, 2009
Location: The Purple Zone
Posts: 5998
Yea, I was wondering about the difficulty of that first little climb, that's why i tossed in the "easy button" in the chest in king's house. If you need a little extra boost on top of that, there's a lifeup hidden *somewhere* before the big cutscene.

I always get to those cannons jump on top of them then those little flying guys kill me and that with the easy switch
im off to search for that life up
The Labyrinth
Aug 29, 2009 at 7:28 PM

"Heavy swords for sale. Suitable for most RPG Protagonists. Apply now!"
Join Date: Jul 2, 2008
Location: &
Posts: 1886
Age: 30
Oohh, looks like you beat Jacob to the punch! (although since you're new here you probably don't know what I'm talking about...) Anyway, downloading and playing now...

"This is the greatest handgun ever made! You have to ask yourself, do I feel lucky?"
Join Date: Jul 29, 2009
Location: California
Posts: 111
Age: 26
Ah you hid that sucker pretty well

and whats the point of the yellow flowers?

Oh wait i found it

Hey! you cant get to the hermit gunsmith 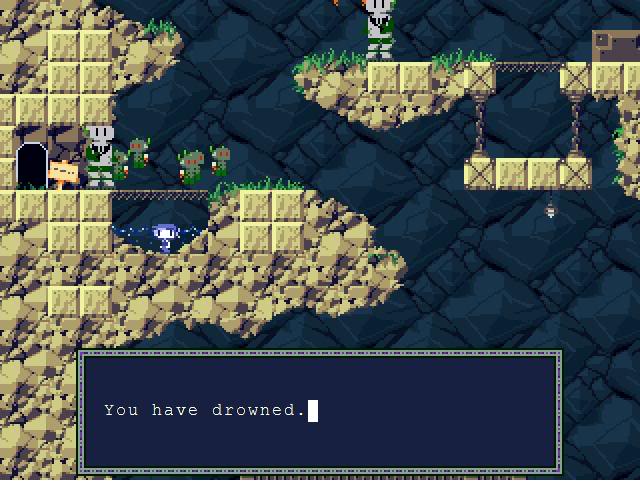 "Life begins and ends with Nu."
Join Date: Aug 28, 2009
Location: The Purple Zone
Posts: 5998
My intention was for the flowers to be the only way to restore health; mimigas depend on flowers for sustenance, right? different types of flowers would restore different amounts of health. Of course, you can't see that with mahin's flowers because there's no way to take damage before you see him. Furthermore, you could increase your "Proficiency" with a weapon (level up) by eating another type of flower, but I have not worked out the kinks in that method yet.

Also, I fixed my link. sorry for that noob mistake

Finally, as for the jump, it is possible, it's just... very hard. you have to time it right because the platforms kinda hover up and down. I tested the whole shebang for hours so I can guarantee it is quite possible. I usually have to take advantage of the limited invulnerability you get when hit to be sure my last two jumps aren't knocked off course

"Life begins and ends with Nu."
Join Date: Jan 4, 2008
Location: Lingerie, but also, like, fancy curtains
Posts: 3054
woah!
how long have you been working on this?
and as noxid is sort of wack to say, I'm going to call you...
conquistador.

other stuffs:
make it so when you light the fire, it stays lit when you exit and re-enter.
all lello flowers should regen health, it is possible to backtrack. (uneducated comment)
when you talk to mahin, make him jumpify you backwards, like in real cs.
when you look at a corpse, it says no time. maybe something more, iono, compassionate? like... "OH NOEZ! It's a CORPSE!!!"
do you really think that arthur would walk inside, then outside, then run to his house, instead of saying all that stuff in one go?
easy BUTTON not easy SWITCH. 4 more health isn't all that good, anyway.
You CAN'T save before the robots appear.

okay, thats it for now, it's impossible, btw.

"Life begins and ends with Nu."
Join Date: Aug 28, 2009
Location: The Purple Zone
Posts: 5998
I actually coded my very first event about... 5 days ago. (the treasure chest in King's house). Of course, the idea has been nagging at my mind for about two months now, ever since I finished Cave Story.

On King's appearance, he is at but the first step of a long and emotionally scarring journey. He will change, but gradually.

The easy button (switch? magic wishing fairy?) does more than give you four aych-peas. It also (marginally) increases the effectiveness of your weapon, and makes the lil flowers restore more health, and reduces the number of enemies on the first pass.

The not being able to save thing is an issue I am quite aware of (having run through about four dozen times testing it). I tried to set skipflags, but it would not work so I just left it.
^I will add a save point in the next release

And yes, upon reflection I did make it insanely hard, probably has nothing to do with the fact that I recently finished WTF Story demo 0.3 very recently... (I didn't think mine was tougher than that)

Everything else has been duly noted, and will be fixed upon the next release, which will include a boss (!), a new map tileset, and more robots!

"Life begins and ends with Nu."
Join Date: Jan 4, 2008
Location: Lingerie, but also, like, fancy curtains
Posts: 3054
like, assembly new boss or combine old bosses new boss.
(and why not just make a save point?)

"Life begins and ends with Nu."
Join Date: Aug 28, 2009
Location: The Purple Zone
Posts: 5998
At the time being assembly is too scary for me, so it will simply be a reskinned boss. (I assume that is what you mean by combining old bosses?) By the time I am done however, I want to have at least some bosses of my own design.

And yes, the yellow mimiga is supposed to be Arthur, although there's nothing that actually says that at this point.

By the way, has nobody found my suuuper secret surprise? heh, I doubt you have. If nobody mentions it by the time I check back tomorrow, I'll give it to you, but for now all I'll say is you'll have to check your literature to figure it out.

Yeesh, this thing is annoying (but in a good way).

Looks to be very, very interesting.

Here's an idea for the dropables: Petals. They look about the same as the originals and can be differently colored/styled for experience or health. For example, bits of a yellow flower for health and white petals/flowers (large exp=flower, small=petal).

This would make things easier and more fun. To offset this, edit the damage and health values for the enemies (but not the robots, they are hard enough).

Oh and a lvl. 1 bubbler sucks. If I could've collected experience, it wouldn't have been so bad, but it was.

Oh, and consider using the health restore. People will hate this if this mod demands absolutely perfect gameplay, not everyone is as good or has the patience you have.
Come see the artist that's apparently better than he realizes!
​
TF2 is addicting. I'd say more, but I'm a bit busy at the moment.
​
METROID PHAZON- "A mix of NES fun and potent radiation"​
My Let's Play Channel! Come take a look!
​
Aug 30, 2009 at 9:30 PM

But level 1 bubbler with ONE ammo? Ultimate Rage.

"..."
Join Date: Jul 8, 2009
Location: Genesis City, Nowhere
Posts: 374
Sometimes the cannons you need to get to the gunsmith don't appear.
Also you can glitch the game, get the ending without even seeing any robots.
I am a gentleman with a Fist.

Cyowolf1122 said:
Here's an idea for the dropables: Petals. They look about the same as the originals and can be differently colored/styled for experience or health. For example, bits of a yellow flower for health and white petals/flowers (large exp=flower, small=petal).
Click to expand...

The ones that look towards you aren't dead yet O.o
although there is that one that dies in your arms...
I will look into this.


Mr. Fist said:
Sometimes the cannons you need to get to the gunsmith don't appear.
Also you can glitch the game, get the ending without even seeing any robots.
Click to expand...

Finally, nobody found my secret? It's not much; just an .ORG I made. I switched it up with "access" in the orgviewer, if you wanna have a listen. It will be in the game next release, along with two others. For anyone who cares, my earlier hint referred to the fact that I put this information in the "readme" file.

Noxid said:
How did you do this? did you somehow jump around that big cutscene event? or something else?
Click to expand...

If you land just on the edge of the tile that causes the event, it won't trigger.
Then you can go into the save room, exit, go into the shack and see the ending
I am a gentleman with a Fist.

"Big Joe Tire and Battery Restaurant! Opening Soon! Eat at Big Joes!"
Join Date: Jan 5, 2009
Location: Easter Island
Posts: 476
This is pretty cool so far.
I like the way you've put the print from the shutters on the robots.
It is a little bit difficult so I'm glad that you're gonna add a save point.
Good luck!
Aug 31, 2009 at 12:51 PM

Royal Spoilers
-I like the opening, and the interactivity in the first room. No easy switch for this pro-average player.
-The Mimiga in the yellow shirt has very small ears, and King's nose doesn't line up quite right.
-If you enter the room with Mahin in it and then exit, Gestation keeps playing. The Mimiga on Arthur's roof doesn't say anything, and HOLY CRAP IT'S LIKE ARMAGEDDON ALL OVER AGAIN.
...THE MOVIE.
-...Duuuuude, that stuff is dark D: You've already mentioned what needs fixing up in this area (saves etc.) so I won't go on about that again. EDIT: If there were yellow flowers here I missed them D: With them it shouldn't be so hard...
-Ahahaha that's terrible >_>; Behold my miniscule dps! ...And no exp either. Well, this should be fun, one way or another...
-It's actually possible to shoot twice in a row quickly sometimes. Huh... I guess ammo recharging is done at a set rate, rather than being based on how long after you start shooting. Interesting find!
-Oh hey giant exp crystal. So much for that... Actually I got hit, so I had to kill the bigbots with the Lv1 Bubbler. Fun times.
-I like the effect with the ruined houses you can check out. As an aside, the Map System is still there, if you didn't mean for it to be. Some mods have had it left in by mistake.

That's all for now. Spriting is mostly good, especially the map and NPC ones. The writing is good too, and the level design is decent, if maybe a bit on the short side for an opening intro. As usual, sorry if I've repeated anything, I didn't read the thread in detail <_< Also as usual, I like the look of this, interested to see what King does now, etc. Maybe this will make Jacob get back to work on HIS King thingy