How could you give her a mouth 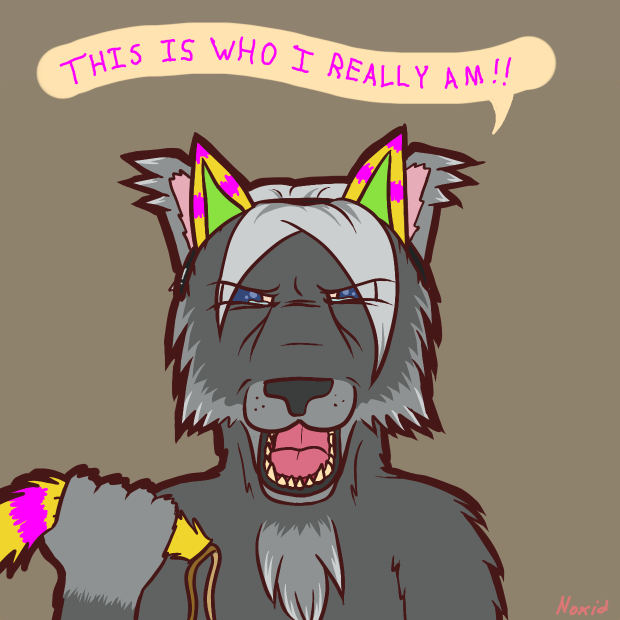 hes a wolf that secretly wants to be a cat all his life. Noboyd undestands him and when hes alone he puts on cat ears and a cat tail that he made himself. Other wolfs make fun of him in real life but he is teh most popular person on cataffinity.net evar and he has 3208458 friends requests (which is more than there are even people registerd). He likes to draw and he makes pictures of what eh relly would look like if he was a cat. His parents are ALIVE but they are DIVORCED and he goes and visits his dad evry other WEEKEND. Favourite music is k-pop and spice girls.

"Life begins and ends with Nu."
Join Date: Aug 28, 2009
Location: The Purple Zone
Posts: 6000
Can you really not figure it out upon reading this thread?


e: I guess this goes here 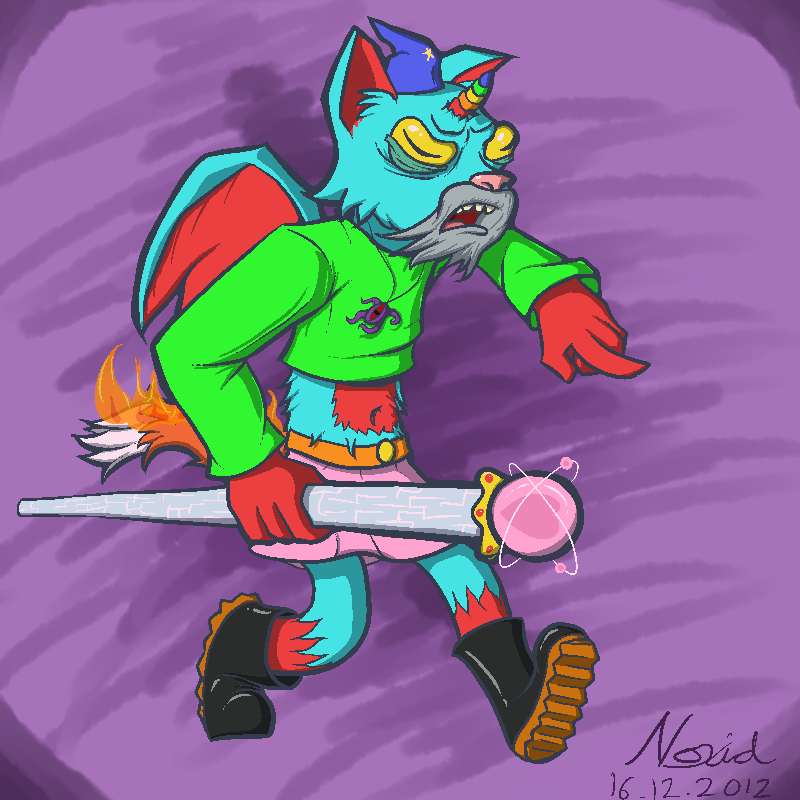 
This is Samuel Guffaw Dative The 784th. 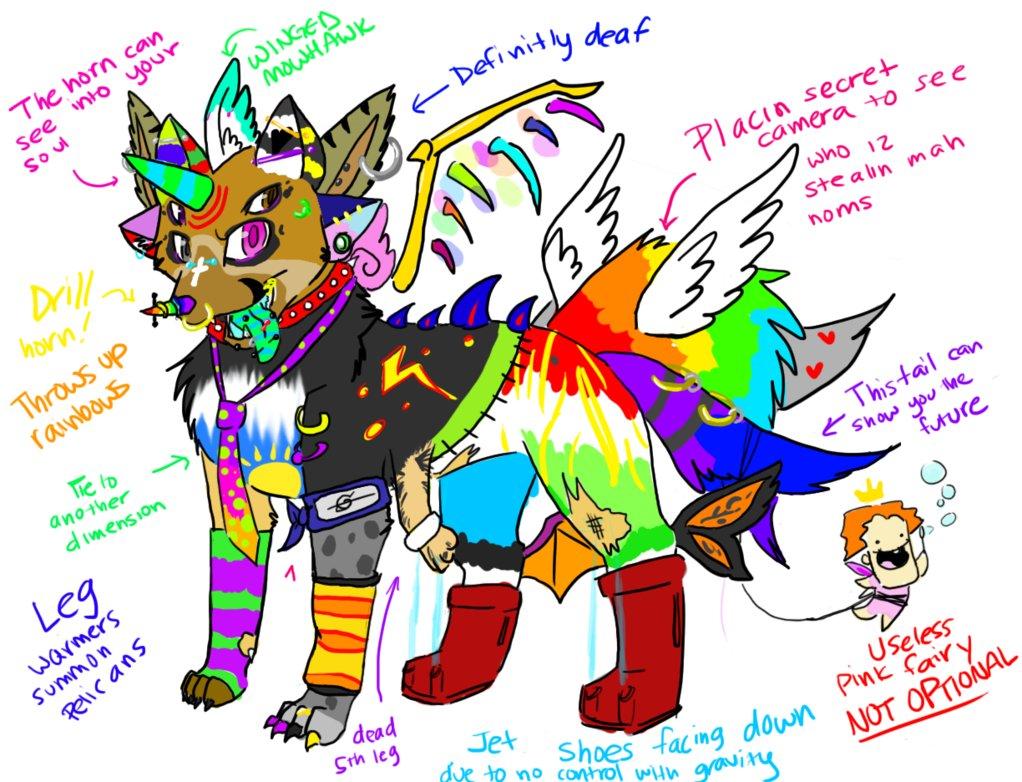 MetaSeraphim said:
A friend a I did this one a long time ago.


This is Samuel Guffaw Dative The 784th.

This made me realise that we've been a bit light on the piercings, at least five per OC are needed if we're really going to be accurate
I'm an admin c:

DoubleThink said:
This made me realise that we've been a bit light on the piercings, at least five per OC are needed if we're really going to be accurate
Click to expand...

"Bleep, Bloop, Bleep, Bloop"
Join Date: Jun 12, 2009
Location: Edge of the universe
Posts: 1608
I'm digging the horn piercing. One of my fursonas had quite a few but not nearly on the level of this.

"Life begins and ends with Nu."
Join Date: Aug 28, 2009
Location: The Purple Zone
Posts: 6000
So I heard one of our vetran forum members didn't have a fursona, and I thought I'd reconcile that 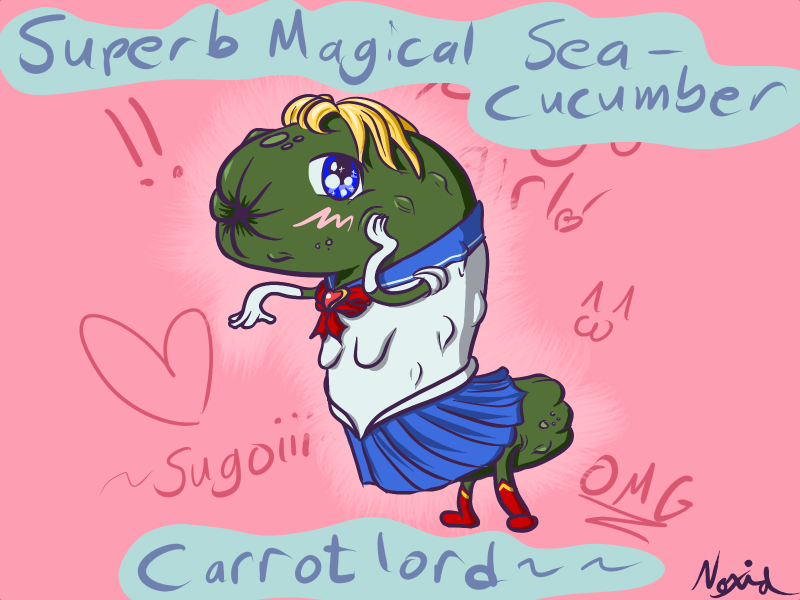 Carrotlord an ordinairy high-school sea-cucumber by day, and uses the power of the love heartbeam crystal given to her by her future self to achieve magical girl form and battle the evil forces of darkness that seek to destroy love itself by night. Her elemental alignment is air and she fights with a staff made from children's hopes and dreams.
When not fighting evil carrotlord enjoys eating pocky and gossiping about boyss~~. She also loves computer science and tries to win the heart of the cutest boy in school by inventing a perfect programming language called "tarragon", but her plans always backfire because he is planning to go into liberal arts. 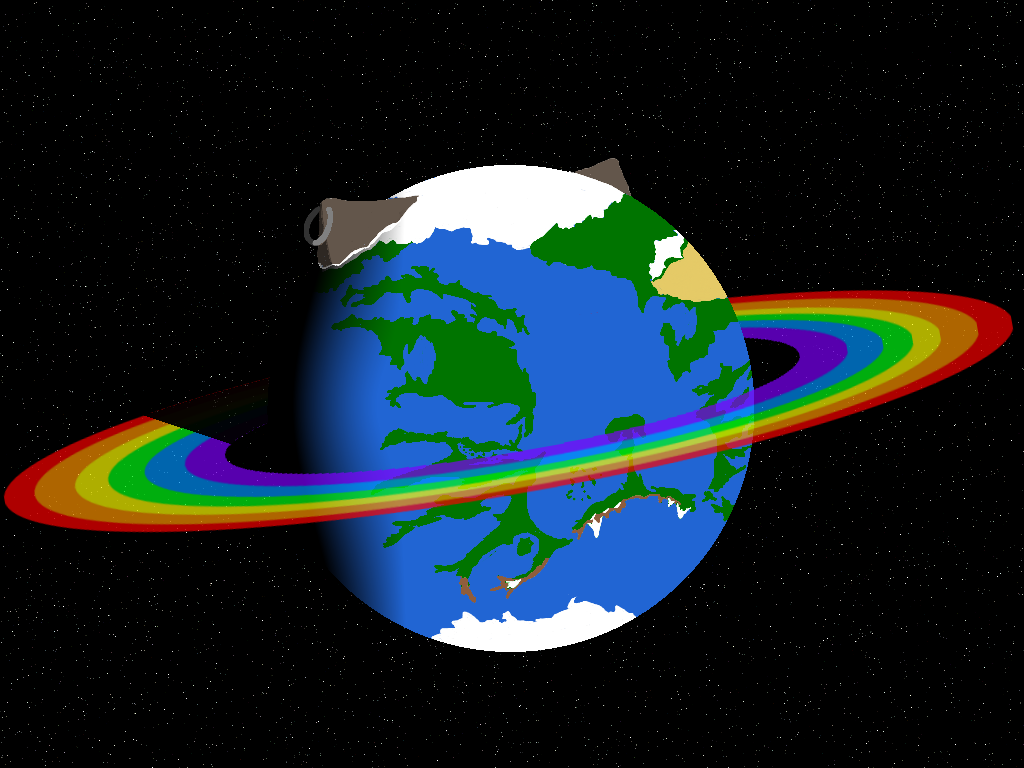 (Clouds are not included in this rendition, to allow a better view of Jerunui's geography.)

Jerunui is an M-class planet with a wide tropical zone and a plethora of diverse fauna and flora. Life occurs throughout his oceans and on every island and continent, except the polar caps which have basic vegetation, small mammals, and birds on south side ONLY. Jerunui's atmosphere is quite humid for a class M, and oceans cover 88% of his surface. Much of Jerunui's geography is underwater, leaving only mountains to create very distinct archipelagos. There are only two continents on Jerunui.

Jerunui has two unique and very noticeable features. One, his two enormous volcanoes in the northern hemisphere. All volcanic activity ceased 560 million years ago, during a bad breakup. He got the west one pierced shortly after that. The other unique feature is his gay pride rings, which formed approximately 1.1 billion years ago when he came out of the closet to the rest of his system.

Jerunui enjoys spending his nights at clubs and dancing the night away. He's never sure who he'll wake up with the next day! His favourite music is dubstep and his favourite electromagnetic radiation frequency is 700 terahertz.

The system's star, Xeyohi Epsilon, has never approved of Jerunui's sexuality or lifestyle and is very mean to him because he just doesn't understand terrestrial planets. Sometimes Jerunui wishes that Xeyohi would just explode, but without destroying all the nearby planets. The star is still in its main sequence, however.

In his formative years, Jerunui was bullied for having a dense makeup, but now that he's got a strong magnetic field, oceans, clouds and life, WHO'S LAUGHING NOW, ASS GIANTS? Not that he harbours any bitterness towards them. He doesn't need all those moons anyway. Jerunui makes plenty of friends at the club. All the time. Those big dumb gas giants haven't been tidally locked with anyone in billions of years.

"Life begins and ends with Nu."
Join Date: Aug 28, 2009
Location: The Purple Zone
Posts: 6000
I'm awestruck
this may be one of my favourite things to come out of the thread yet. The writeup really sells it. You win all the fursona points.