"The Ultimate Sword of Extraordinary Magnitude"
Join Date: Jan 4, 2009
Location:
Posts: 298
I do not want to post it in this thread because it is more than 60 days old, so I am just going to post this here. (Admin or moderator, if you find it fit to be merged to the thread mentioned before, remove my notice and merge.)

I was looking at images.google.com using the serch term (カーリーブレイス) and came across this! EDIT 1/15/2017: Link is dead, however the MUGEN Archive site shall cure this. That is why they're the cure for error 404 (and such) Here is a Wayback Machine link if you cannot handle the wait with annoying ads.

Note: Debug flooding occurs at Level 3 while AI MODE is activated.
Because the readme file and config file are Japanese, I had to translate the documents using Google translate and rewrite them to make more clear. Here they are. Now included in the Add-On patch. Check post #13.

EDIT: While trying to find Cave Story stages, I found a Balrog by Michael Armaros. EDIT 1/15/2017: The download link takes you to axfc.net which used to host this file, but it is 404'd. Again, the MUGEN Archive solves the problem.
Demonstration video: http://www.nicozon.net/watch/sm16885890
YouTube videos: Search

I do not want to post it in this thread because it is more than 60 days old
Click to expand...

And so you think creating a new thread is an acceptable alternative?

If we already have a MUGEN thread, and you actually have relevant content to post, then just post it in the thread.
Necroposting is a pollution only in the case of useless thread bumps, because it lowers the position of all the active threads which are, well, active. Posting relevant stuff is a completely different matter since it means the bumped thread is active again.
You made something worse than it, aka creating a new thread (which is basically the same as necroposting, since it too lowers the position of all the active threads) on a subject already dealth with by another thread.
So basically, it's like you bumped the old MUGEN thread, but you erased all the previous posts in the thread while doing so.

Don't worry though, the mods are just going to merge this thread in the old one, and we are (at least I am) not going to bear any grudge against you for doing this mistake. I'm just a bit tired of people saying "necroposting is bad so I'm going to make another thread on the same subject" so I decided to answer once and for all to those people: "no, just bump the old thread if you have relevant stuff, it's better than making another thread".

"Bleep, Bloop, Bleep, Bloop"
Join Date: Jun 12, 2009
Location: Edge of the universe
Posts: 1596
Well since we are so hard on necrobumps, the OP obviously didn't wanna screw anything up so people would jump down their throat. Give them a break :/ at least they thought about it. But I guess they learned?!

Because the readme file and config file are Japanese, I had to translate the documents using Google translate and rewrite them to make more clear. Here they are.

You can download M.U.G.E.N 1.0 at http://www.elecbyte.com. The char works with this version, down through the beta (2002.04.14).
Also, if powerbar is maxed out (3) and you perform a hyper called "Iron Bond" (2141236 + X or Y)...
Quote appears and Curly mounts on him and they both fire Nemesis Lv1 shots rapidly for a while.
EDIT: While trying to find Cave Story stages, I found a Balrog by Michael Armaros.
My personal site is SHUTTING DOWN for good. Sorry...

Wild Desu said:
Well since we are so hard on necrobumps, the OP obviously didn't wanna screw anything up so people would jump down their throat. Give them a break :/ at least they thought about it. But I guess they learned?!
Click to expand...

Fluff8836 said:
You can download M.U.G.E.N 1.0 at http://www.elecbyte.com. The char works with this version, but I am not sure of the BETA M.U.G.E.N because I don't use them anymore.
Click to expand...

Oh! Thank you very much, I remember last time I downloaded MUGEN (a few years ago, I believe) I couldn't get it to work

Although, that was probably due to my limited computer knowledge at the time. Cool stuff, I'll have to try it soon.

"The Ultimate Sword of Extraordinary Magnitude"
Join Date: Jan 4, 2009
Location:
Posts: 298
If you are ever stuck, here is how it is done:

Unzip the character folder (if there is one, otherwise unzip contents to the folder with the SAME name as the .def filename) and place it in the chars folder. Next, in the data folder, open select.def in notepad (or right-click it and click Edit). Follow ALL directions in this file on how to place characters and stages. Place the name of the folder as instructed.

EDIT: Tpcool has replied by editing the post before this one, quoted here:

Oh! Thank you very much, I remember last time I downloaded MUGEN (a few years ago, I believe) I couldn't get it to work

Although, that was probably due to my limited computer knowledge at the time. Cool stuff, I'll have to try it soon.
Click to expand...

As for any Cave Story M.U.G.E.N stages, the "Balcony" and "Throne Room" can only be seen in YouTube as I could not ever find a single download, BUT I found "The King's Table" in the Google search.

EDIT: I have found 3 of the following Cave Story stages:
My personal site is SHUTTING DOWN for good. Sorry...

trickybilly said:
Most MUGEN games won't work in 64 bit Win7 and are asking for 32 bit. Is there a workaround?
Click to expand...

Please direct your attention to the forums at elecbyte.com. This topic is about specific M.U.G.E.N character based on Cave Story. I played it on a 64-bit OS and it still worked for me.

I scaled Curly down by half for Bane84's Contra stage in this video. View it and see her in action. The victory quote (M.U.G.E.N 1.0 only) that I added relates to her victory pose when she wins. This is for humor purposes...

Try challenging the GOLD Curly (12P). Hold Start and press Z on Curly in Select Screen for the palette. Has very strong attack and defense, whimsical star (being part of 11P and 12P setting in config.txt) and also can REGENERATE HEALTH.

This video shows the battle between Curly and Balrog at The King's Table. Also, enjoy this other video. And this one too.

When I looked into that animation with Fighter Factory, I noticed Curly eating some yellow stuff and copied the Japanese text to the search box of the browser. Turns out, Curly is compatible with Eternal Fighter Zero's Akiko Minase, that purple-haired housekeeping girl from Kanon made by M.U.G.E.N char author Shimon and the one made by author Uma. Curly is having a sample of Akiko's yellow jam!

To perform this in M.U.G.E.N, Akiko must have 1/3 Life left and MAX Power to perform the "Final Memory" command 2A2BC, if the attack connects Curly, she will feed her the Jam that's not sweet at the breakfast table. Both Shimon's Akiko and Uma's Akiko, Shimon's Akiko does OHKO, but Uma's Akiko could not completely knock out if opponent has a lot of Life. 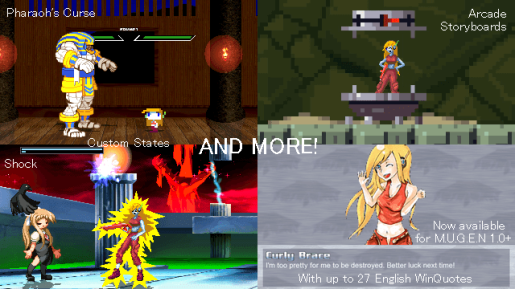 ​
Below is an Add-On Patch for Curly. I added sprites and animations for interaction by EFZ Chars like Misuzu Kamio, Kanna, plus some non-EFZ chars, etc. (uses group 7696, 7697 and 7990) Plus, Demitri's Midnight Bliss can burn after!

~ UPDATES ~​
3/14/2015: Added two new additional states, including Pharaoh's Curse, which you see the Cave Story sprite version of Curly. I used with CVS2 Anakaris by Gal129. Uses the 9030s groups. Pharaoh's Curse Showcase Video
3/16/2015: HUZZAH! I created Arcade Storyboards! They're now in the patch. Package of videos of my Arcade run showcasing storyboards. (7z file, use 7-zip.)
3/27/2015: Now updated the def and states for M.U.G.E.N 1.0 standards. Use Curly_Brace_1.0.def if using it for M.U.G.E.N 1.0 or above.
4/25/2015: Added Ougon Musou Kyoku META return states with a cut-in art courtesy from lyiol. Color modified by me.
6/2/2015: Added two new victory poses, one regular and one that you win with 250 life or less.
6/7/2015: Increased RoundNotOver time for Win at Low Health pose, WinPerfect and Win at Low Health pose no longer works for palettes 11 & 12, one of four regular poses instead.
6/8/2015: Added a special win pose in Curly's states when defeating a certain boss character to make compatible.
3/4/2016: Minor tweaks to sprites and sounds. Non-18+ is now default and its SFF and AIR that contained the 18+ content are now in their special files.

Simply read the instructions to patch your Curly that is originally downloaded from (Cabocha's site or sites that distribute it).
To see for yourself, play Curly in M.U.G.E.N with a character that can shock, burn or freeze (For example: 586's Misuzu Kamio, Gal129's Demitri or Warner's Kang) as the opponent to experiment shock, burn and freeze! Or watch this video (Only shock and burn.)

Since Curly does not have her very own stage, I have created "Sand Zone Residence" stage for M.U.G.E.N for all versions, 1.1 stage zooming compatible.

I created a M.U.G.E.N Database Wiki article for this stage! Right here. Oh... and here is a video of the stage.
Last edited: Mar 10, 2016
My personal site is SHUTTING DOWN for good. Sorry...