"Life begins and ends with Nu."
Join Date: Jun 27, 2013
Location:
Posts: 2635
Age: 26
Hey, I guess it's been a while since I last did a mod. Anyways, this is pretty like 2DBro's conceived "Forums Story", but this mod isn't just retextures. Levels have been redesigned in this mod and some enemies have been buffed, giving the game a bit of a challenge.

NOTE (2016/03/30): Mediafire link fixed (I don't know why you would still want to play this dumb mod, though.) The mod's still pretty fucking glitched and cancelled to the 42nd aether.

IMPORTANT UPDATE (2015/08/24): This mod is officially cancelled. First come, first serve is a stupid concept for replacing normal CS characters. I pray to whoever out there that if someone else makes a CS Forums themed mod, please use important members. I do have some assets that I made for the mod that I'll be glad to share for others to use, and they can be downloaded here! 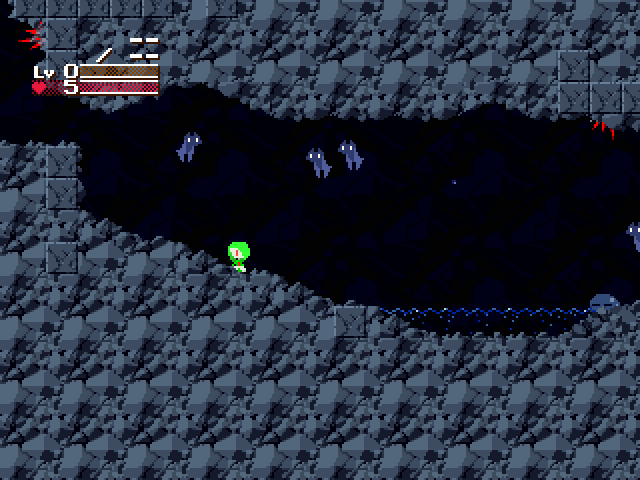 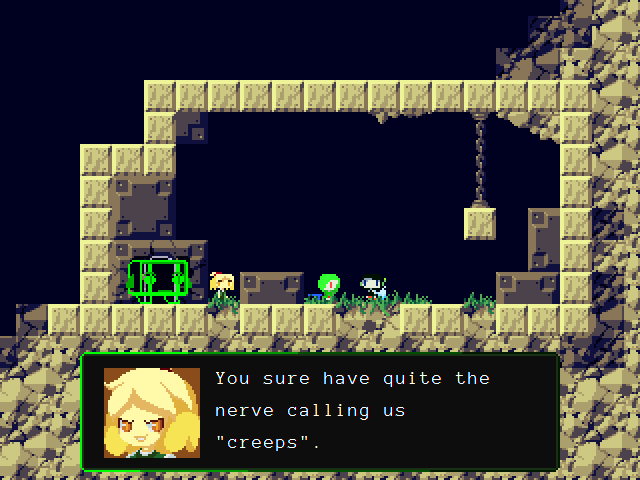 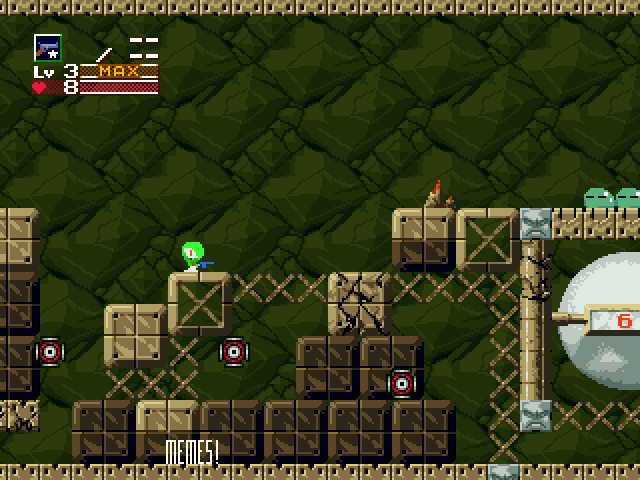 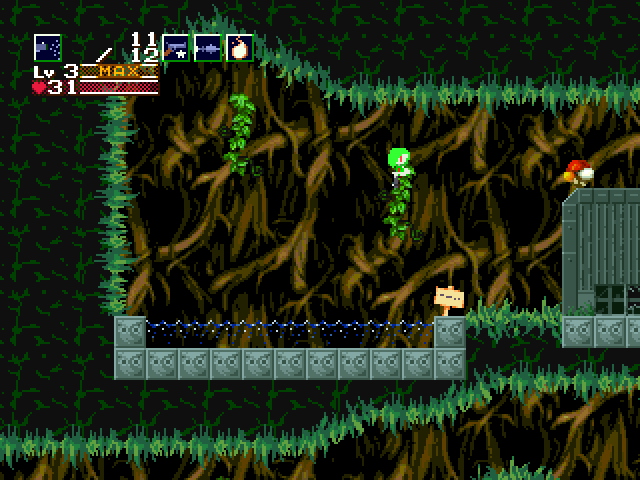 I advise to not use your save files from the previous demo, especially if you last saved in the demo end room.

Older demo(s) (for those who are into wondering how the mod used to be like):

Credit is given to whomever's sprites, hacks, and orgs I used in the mod. The list of people I give credit to is in the download.

--Progress--
(Mod is cancelled. No more progress has been made since the FamiZone.)

Also, yes, most sex-related jokes have been scrapped and/or replaced with different dialouge.


PS - Asking for a part won't exactly get you anywhere. There can be so many character roles within the mod, and the list is pretty much already full. This isn't Smash Bros.
Last edited: Mar 31, 2016

"What're YOU lookin' at?"
Join Date: Oct 17, 2011
Location: probably somewhere else
Posts: 1050
Age: 24
Armsitem.tsc is missing
You can't get back to the village from Egg Salad unless you use the critter down there or the beetles

"Life begins and ends with Nu."
Join Date: Jun 27, 2013
Location:
Posts: 2635
Age: 26
Okay so, I just noticed the ArmsItem.tsc file missing. I have no idea how that happened. I double-checked it last night. Let me go fix that problem.

Problem is fixed. Also, it is possible to make the jump in order to go back to the village from Egg Salad.

TLincoln said:
Also, it is possible to make the jump in order to go back to the village from Egg Salad.
Click to expand...

Doors said:
I don't know what you're talking about I got back just fine
Click to expand... 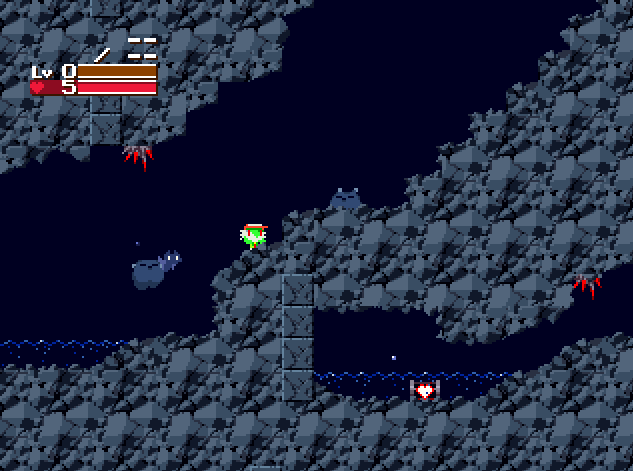 There are a lot of slope issues, but this one in particular actually caused me to jump into an enemy. Finish your slopes or make it a solid block. 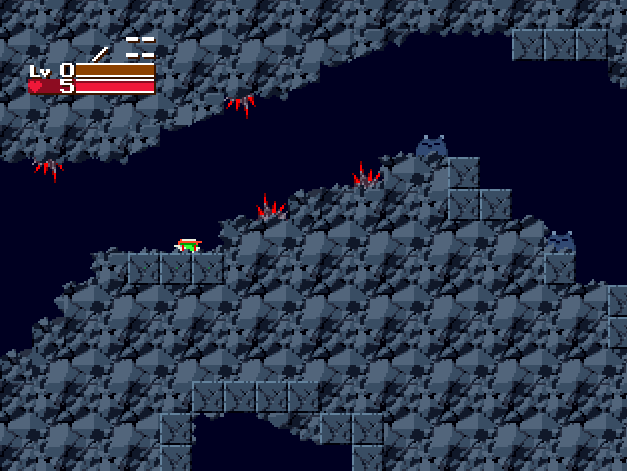 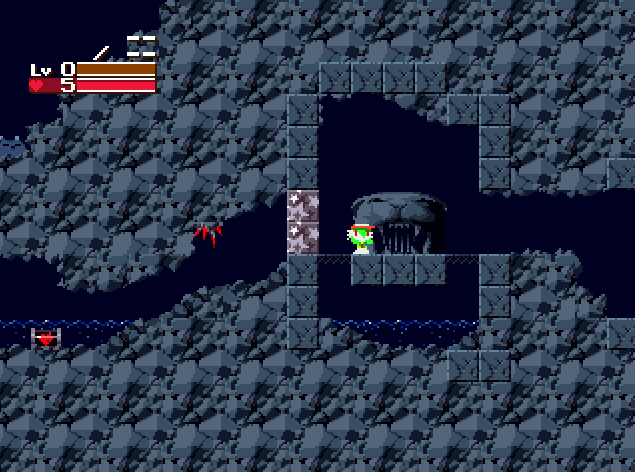 I feel like those bars in the middle of the mouth aren't supposed to be there, otherwise it looks like you're not supposed to go inside. 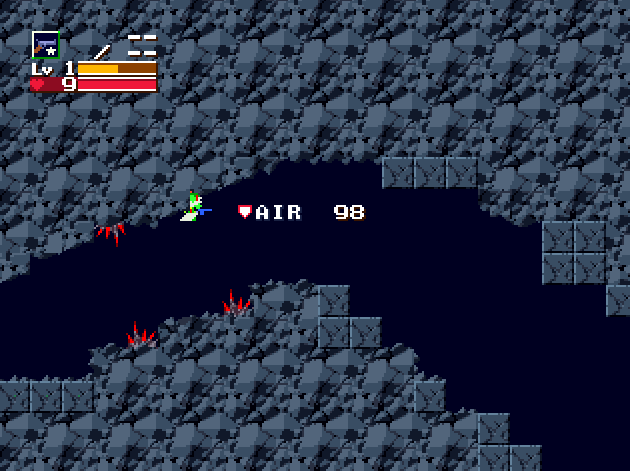 UM this probably shouldn't be here. 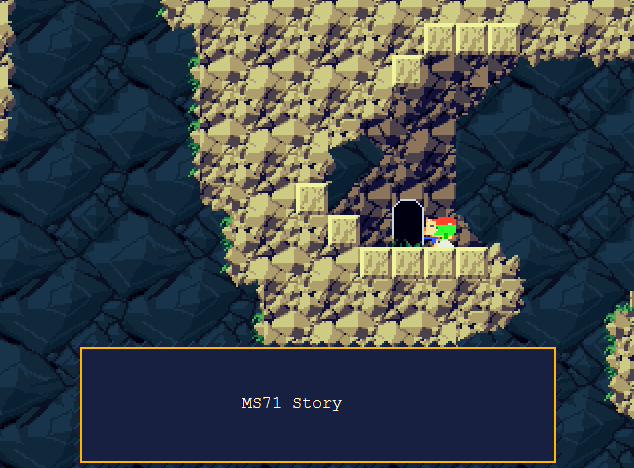 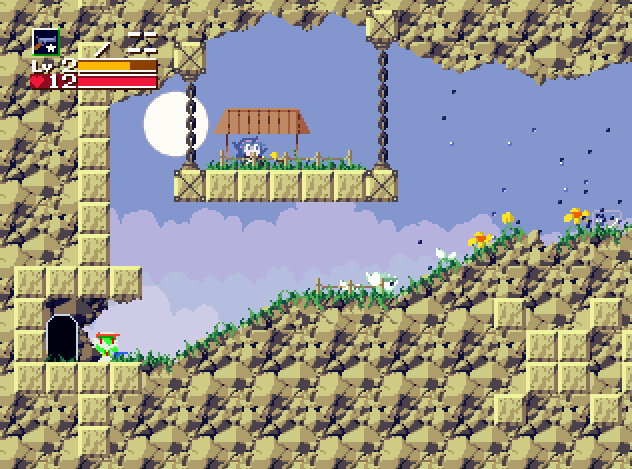 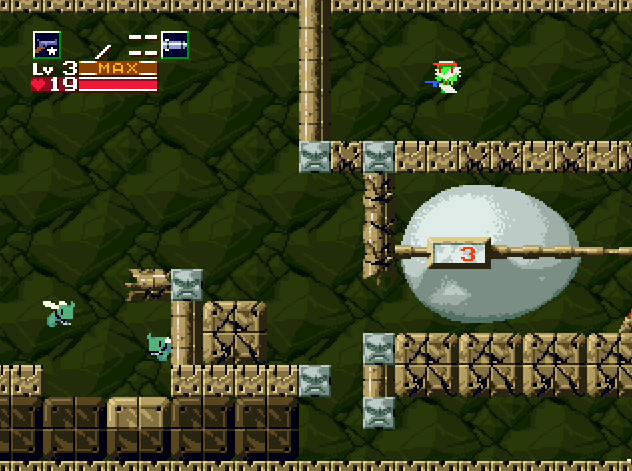 Oh huh a wall i don't feel like going back i'm bored now
Even though it was mostly standard Cave Story with a small, new coat of paint, it was amusing. I was hoping to see more changed character interactions, but it ended up being mostly Cave Story with a few lines of dialogue changed to match whatever forum member they were referring to. The First Cave was fairly competently designed which is cool, and I like the name "Egg Salad."

but yeah it's a p cool mod I guess

"Life begins and ends with Nu."
Join Date: Jan 13, 2011
Location: Lasagna
Posts: 4489
Oh also curiosity killed the cat room is absolute bullshit. If you haven't saved then don't go into the room to the right of the assembly hall. It's an instant death trap.
EDIT : USER WAS WARNED FOR THIS POST
Nov 9, 2014 at 3:31 AM

Hatred can overcome despair, but it corrodes the heart in the process.
The process can outweigh the product.
Good minds can remember, great minds can forget.
Kill your anger before it kills your sanity and yourself.
The truly blind aren't those who cannot see, it is those who cannot perceive/understand. (What sounds better?)
Sometimes, looking at the big picture can help you see more detail.
How can humans be complicated enough to fight wars, yet be naive enough to not have peace?
Hard work doesn't always pay, but no work always doesn't pay.
Imagination is what drives reality.
Scars don't show how much you've suffered, they show how much you've endured.
If everyone were a leader, nothing would ever get done.
The best way to live a life of dignity is to throw away your pride.
Freedom itself can be debilitatingly restrictive in its own right.
The destination is just an excuse for the journey.
Being above someone doesn't give you the right to look down on them.
The state should hold as much power as necessary, and as little power as possible.
Nov 9, 2014 at 5:15 AM

"Big Joe Tire and Battery Restaurant! Opening Soon! Eat at Big Joes!"
Join Date: Mar 26, 2014
Location: Somewhere with Wi-Fi
Posts: 543
Age: 24
I tried out the demo, and it's looking decent so far.
Here're the notes I took while playing through it: (some of the things I pointed out seem to have been mentioned already, but they haven't been tended to yet, so oh well) 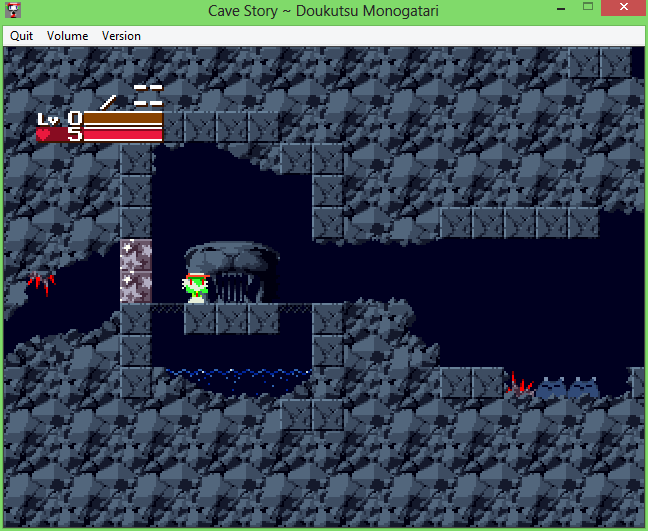 Shouldn't there not be a grate here? Just wondering since I can go through it as if there wasn't one. 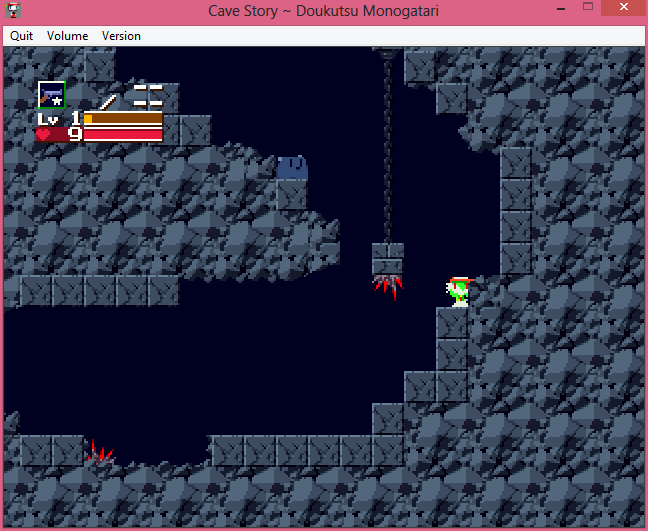 If I walk into this bit of terrain here, I end up getting glitched up on top of it.
In fact, a lot of such terrain has this problem... 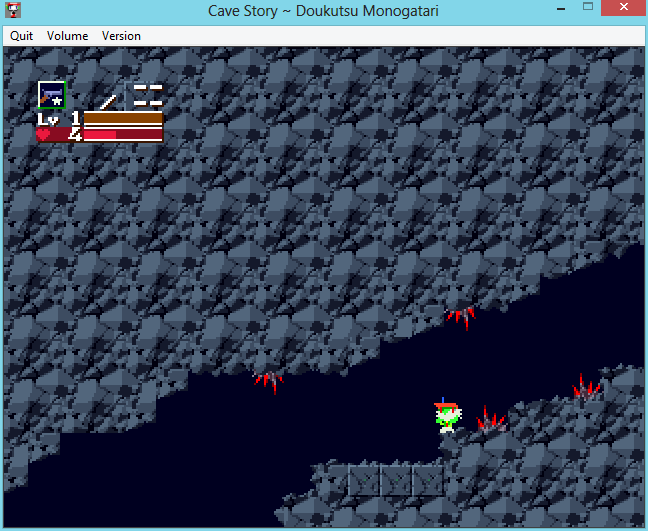 The ceiling to the left of that spike up there also caused my air meter to come up, complete with a splash. 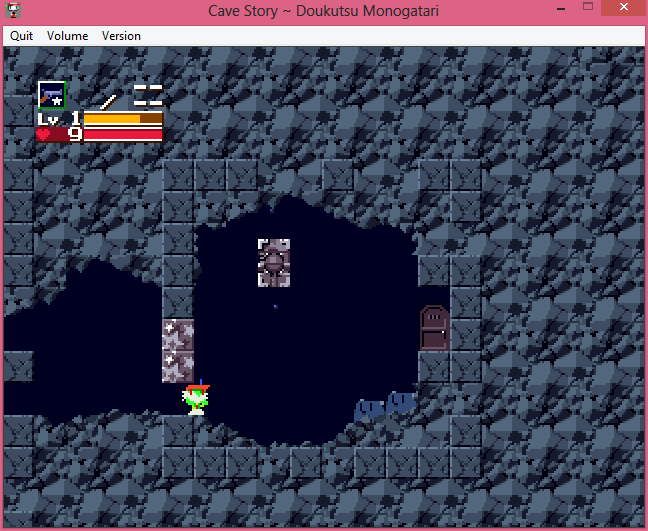 TLinc
TLinc why is there a random press in first cave

how and why would zazuma fuck a cockroach (unless that's implied to be a Gaudi, but still) 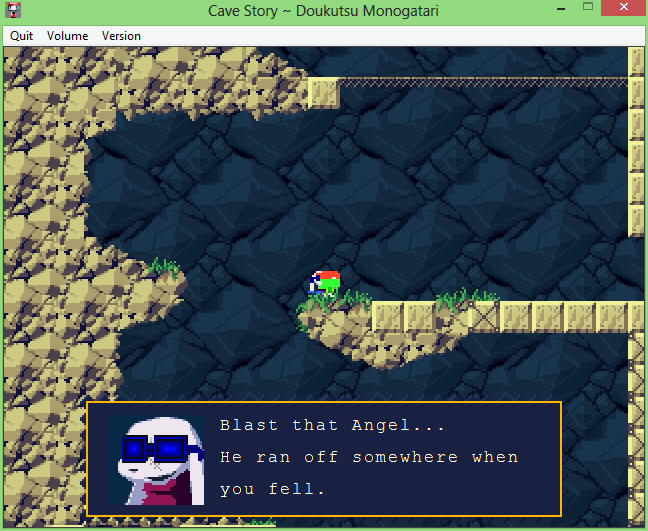 Does Angel Quote have a nickname other than... Angel? It just sounds more appropriate to have it "angel"
Though, from the looks of it, you're really trying to stick to the original dialogue layout

what's the point of the Bad Idea, Kid room? If I hadn't heard of it earlier, I would have went in here without saving... which would have been mildly irritating

since when did Spirit eat... you know what nevermind 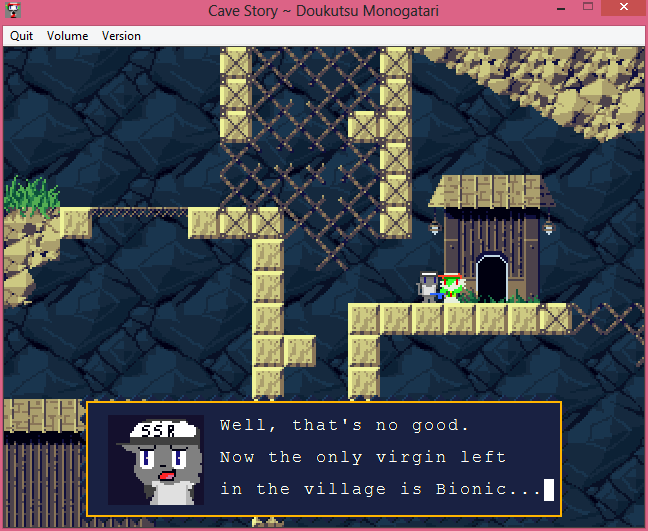 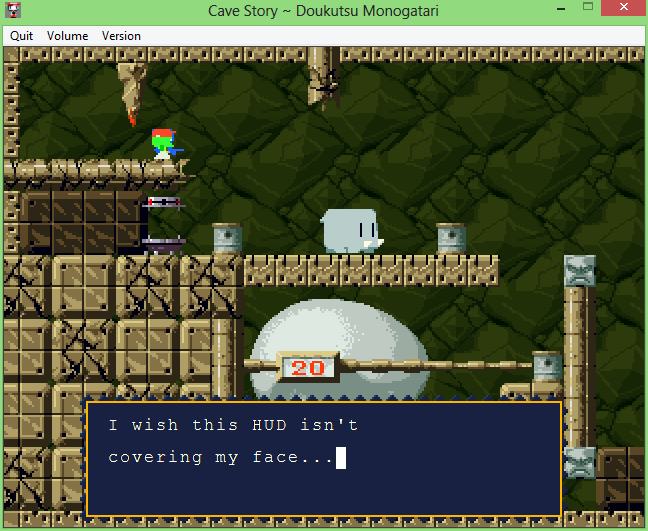 It should go: "I wish this HUD wasn't covering my face..." 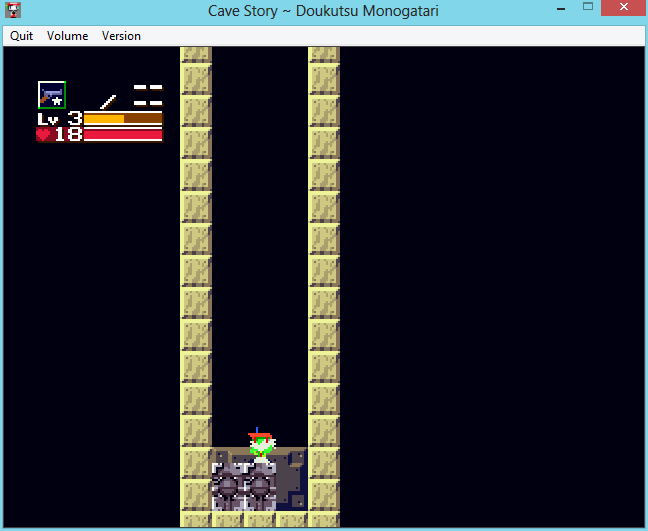 your traps got nothin' on THIS Gardevoir
though now I'm stuck 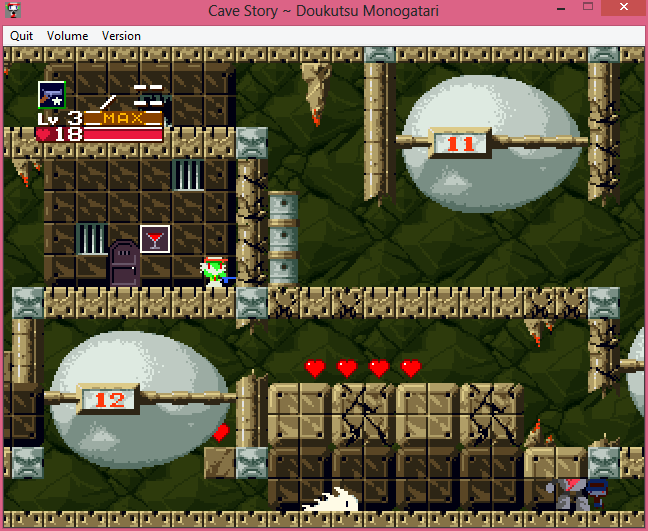 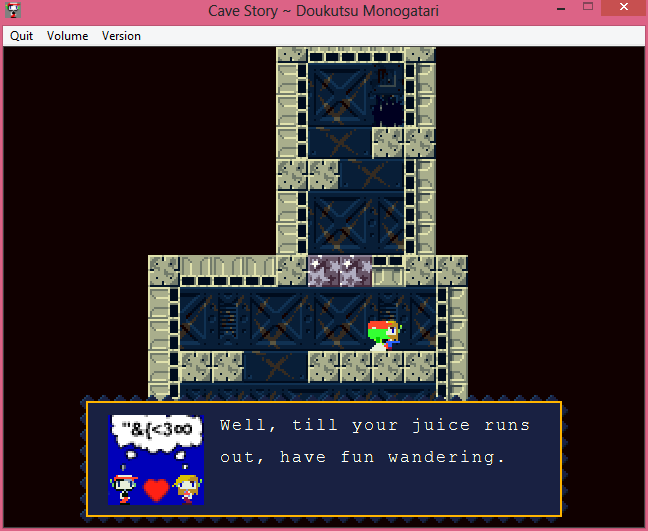 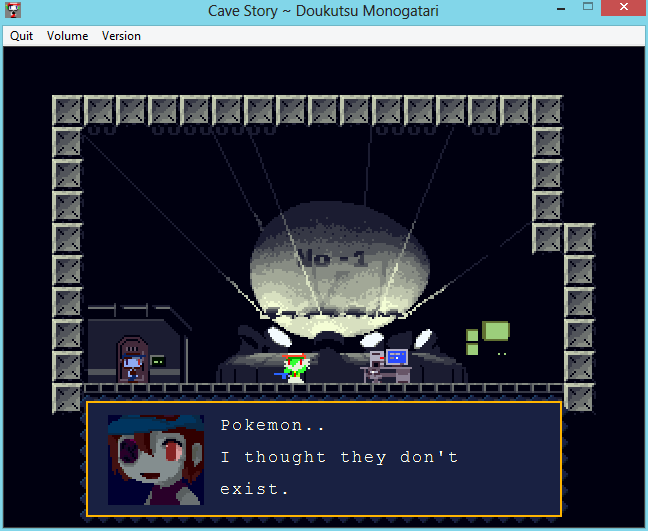 wouldn't it be "they didn't exist" instead of "they don't exist"?
or am I just reading that wrong? 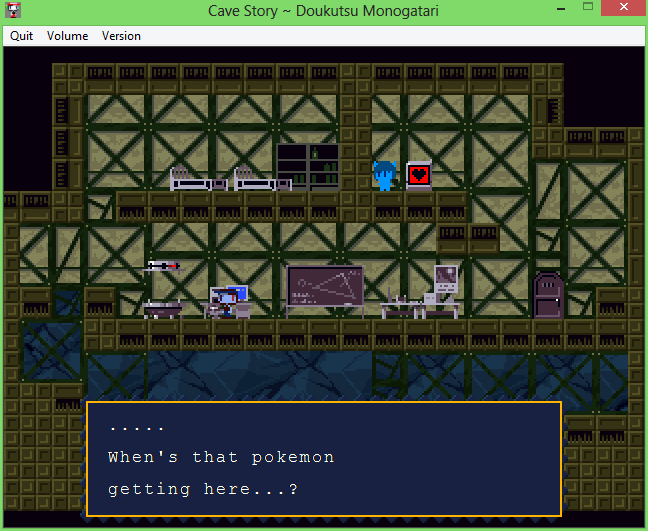 "pokemon" should be capitalized

When Bionicobot calls Pummel a creepy-eyed freak, how does he see his eyes behind those sunglasses? 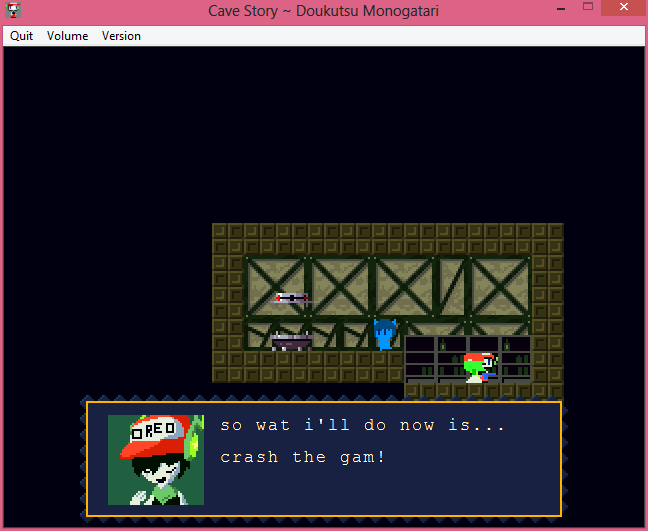 Well, that's most certainly a way to end a demo
Mods:

"All your forum are belong to us!"
Join Date: Apr 6, 2014
Location: a bathroom
Posts: 621
seasons do you not know of my sexuality
@"since when did Spirit eat... you know what nevermind"

your traps got nothin' on THIS Gardevoir
though now I'm stuck
Click to expand...

You know, I am thinking of putting in an exit event because of that.

Spirit Drifter said:
seasons do you not know of my sexuality
@"since when did Spirit eat... you know what nevermind"
Click to expand...

Well, if I had any doubts before, I guess this confirms it.
I just didn't think it'd be mentioned so forwardly.
Mods:

TLincoln said:
You know, I am thinking of putting in an exit event because of that.
Click to expand...

It's really easy to survive when you have the Missile Launcher, too. Consider adding the exit.
Nov 9, 2014 at 6:57 AM

SeasonsOfDestiny said:
Well, if I had any doubts before, I guess this confirms it.
I just didn't think it'd be mentioned so forwardly.
Click to expand...