"This is the greatest handgun ever made! You have to ask yourself, do I feel lucky?"
Join Date: Oct 15, 2017
Location:
Posts: 96
Age: 16
Here it is,
ABOUT:
This is a Cave Story mod that takes place before and after the events of Crystal Crisis (im not sure if that is even canon anymore.)
Most of this mod is inspired by Telltale Studios (mostly Minecraft Story Mode and Back To The Future.)
BASIC PLOT:
Episode 1: Quote, Misery, Curly and Balrog arrived at the surface and need to find the breakfast.
Episode 2: Quote and the resistance leaders are kidnapped by amogus and they must escape.
Episode 3: Quote gets scammed and he needs to stop the scammer with the help of his friends.
Episode 4: After being seperated from his friends, Quote must fight his new foe. Releasing in Modfest 29
Episode 5: Quote and his friends has entered a whole new world. 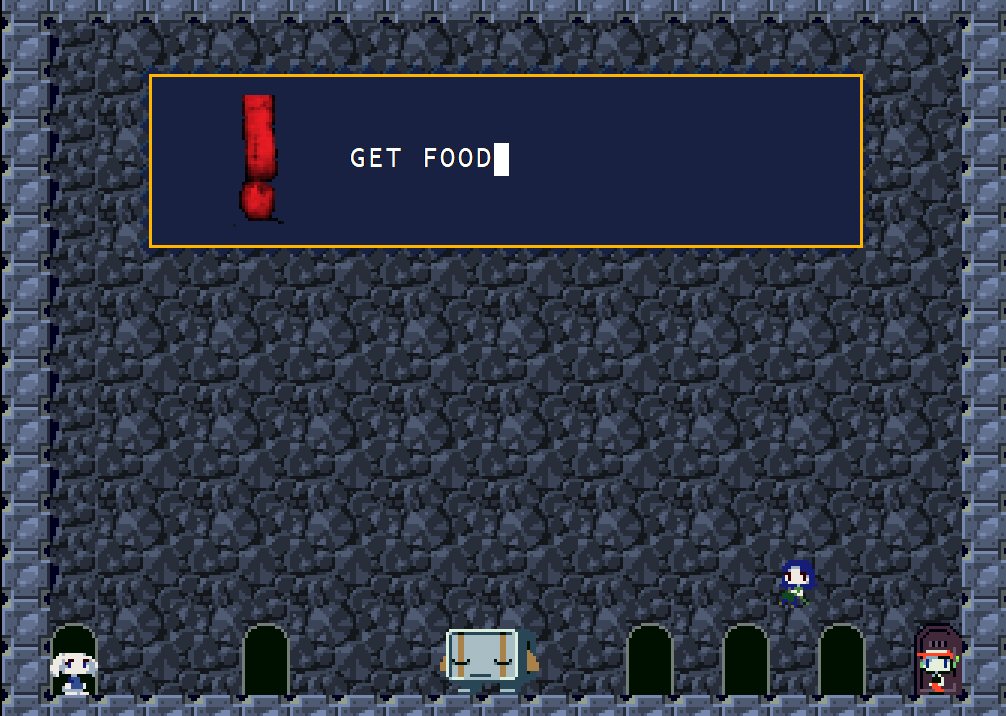 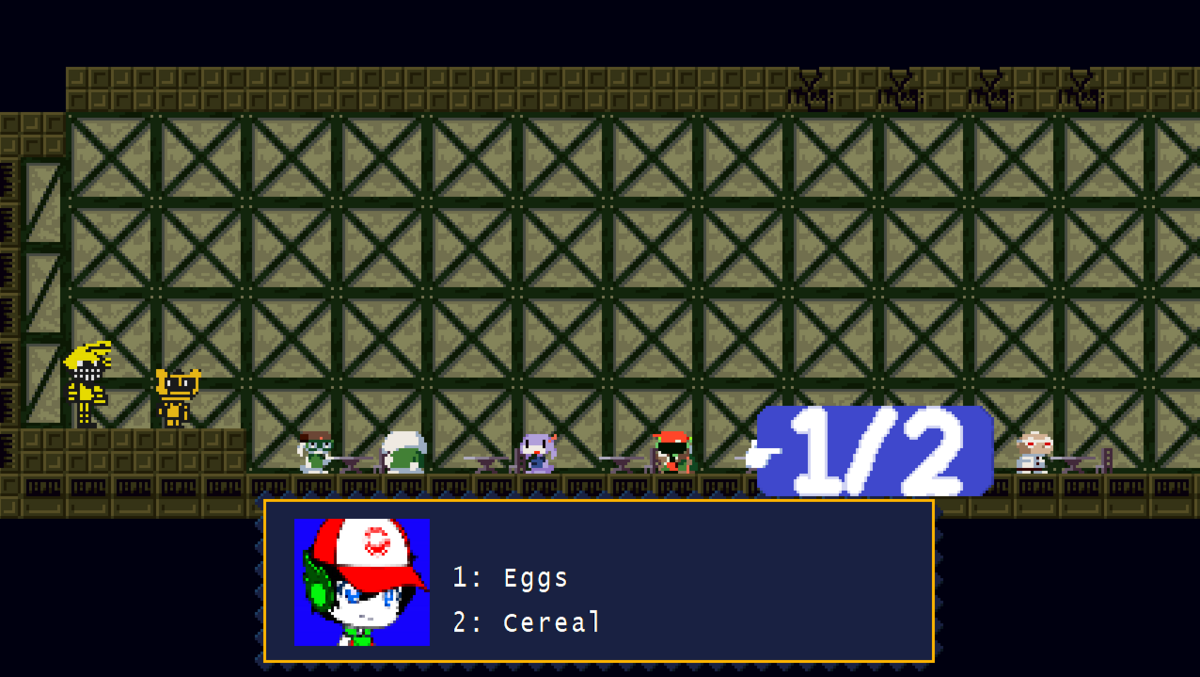 
I won't comment about the gacha profile pics mostly because Walfas are better.

I don't know if this is wanted to look like a video game, but if so, I would have suggested to use another tileset that has flat surfaces that work like prtEggs or others. 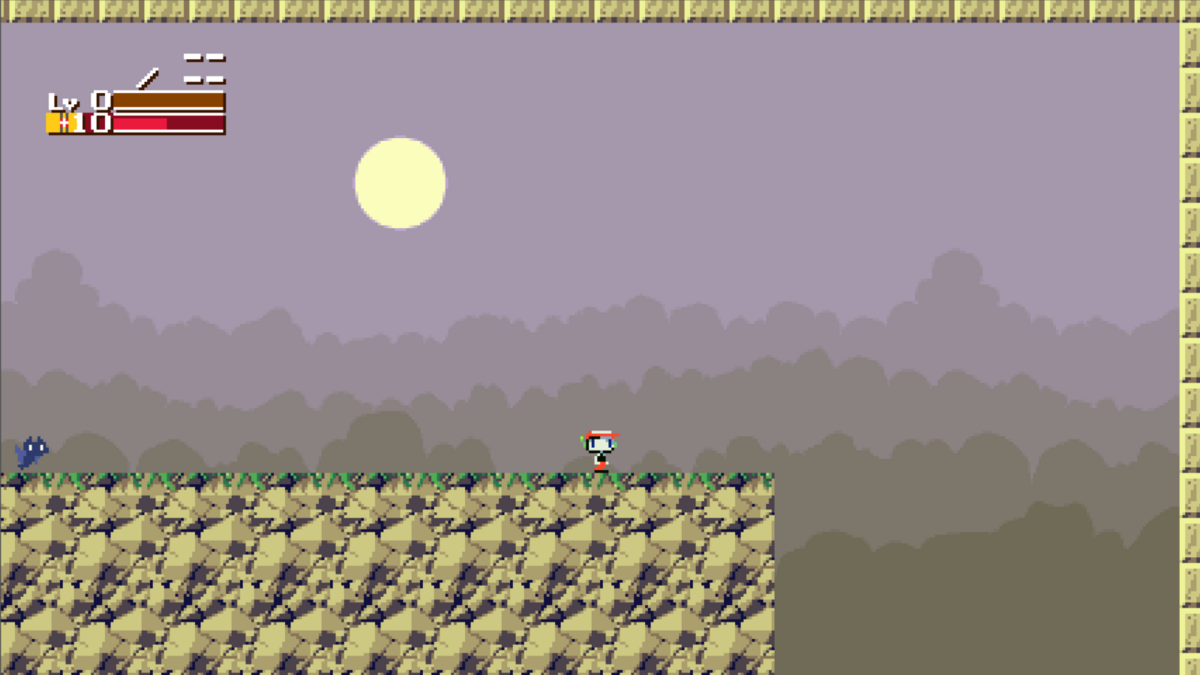 Also, the beautiful intro cutscene that has black borders despite having a Widescreen mod enabled. 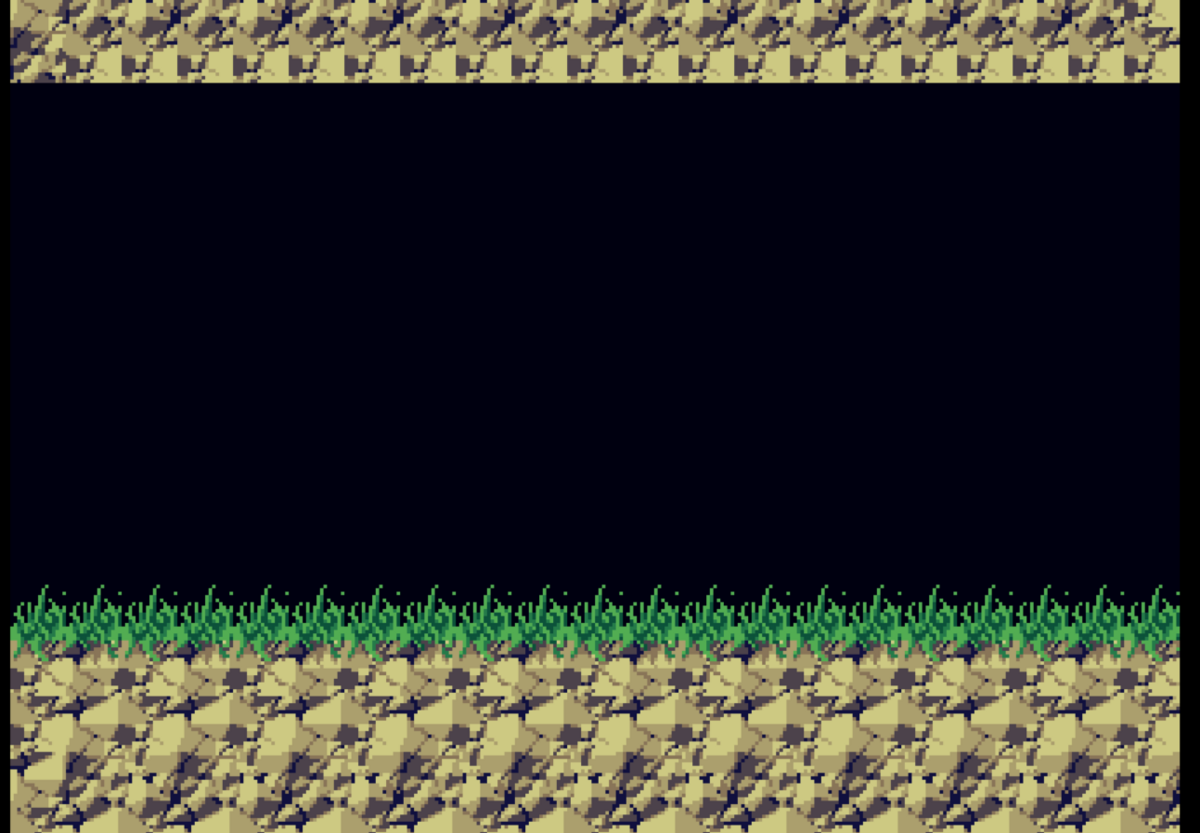 Yeah, not too thrilled so far, the incorrect tiles placement doesn't help too.

Played a bit more later and the first thing that I noticed in the dialogue (except a very old reference in the "Tutorial") is that there's ominous points coming in the dialogue, oooh ghost sights.

(It should be a question mark btw)

There's a glitch in the dialogue choice with Curly btw, if you ask for, first of all, there's no <CLR so it does this:

And second, when you ask for breakfast, they'll talk about Combine, also what the fuck is a combine anyway, bit of exposition? 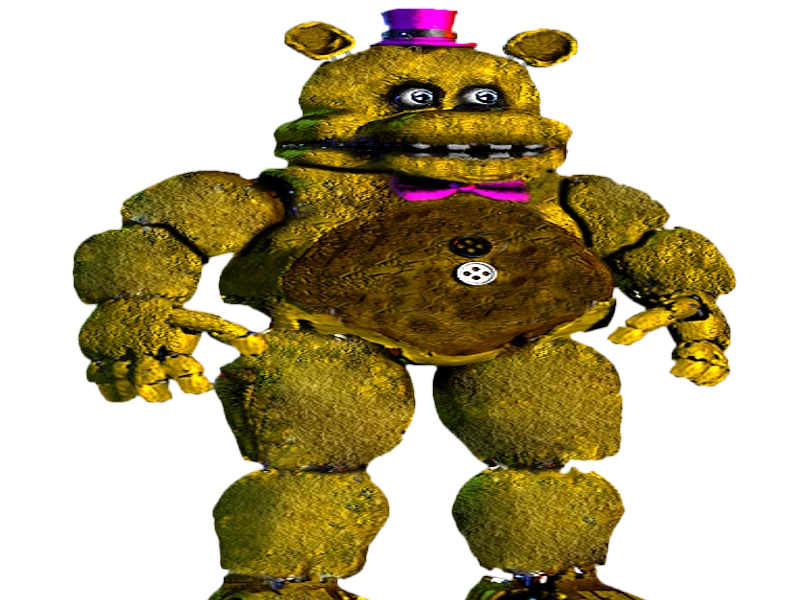 Yeah this game kinda be an acid trip, after that, you get like two fnaf reference after gura with the kids of Fnaf 4's minigame and then you get bullied by Terrance in a recreation of that one Bite of 83 animation, I'll assume this mod is a joke, in the same vein as Dayshift at Freddy that could be wacky and out of place like that, but the base game was not really.
I kinda felt like I was watching a video of dumbsvile where random shit pops out of nowhere super fast I guess.

Mister.Hex said:
I won't comment about the gacha profile pics mostly because Walfas are better.

Mister.Hex said:
There's a glitch in the dialogue choice with Curly btw, if you ask for, first of all, there's no <CLR so it does this:

And second, when you ask for breakfast, they'll talk about Combine
Click to expand...

Fixing both of those bugs in the next update.

Mister.Hex said:
don't know if this is wanted to look like a video game, but if so, I would have suggested to use another tileset that has flat surfaces that work like prtEggs or others.
Click to expand...

Also i just realized that the end cant be accessed in the 1st version, this is gonna be fixed in the next update.

Mister.Hex said:
also what the fuck is a combine anyway
Click to expand...

"Life begins and ends with Nu."
Join Date: Dec 31, 2011
Location: United States
Posts: 2237
Age: 25
Haha, I got a good kick out of this mod. I liked this mod's random and silly sense of humor. Both the lines spoken by the character, as well as the attitude of the narrator. The joke at the beginning with you dying and it being Quote playing the game was pretty good. At first I was a bit frustrated that I wasn't given the chance to save before fighting those robots, but then I realized it's super easy to get to that point really quickly. Not sure if it's intentional, but fighting those robots the old-fashioned way is really hard, so I only ever managed to beat them by launching them into the sky. Does the mod end once you've defeated those robots by launching them into the sky? The screen went black once I did that, and I didn't know where to go after that. I ordered cereal form Chaco, and then Jenka gave it to me after the battle, but my inventory says it's gum base.

It seems that a lot of this mod's lack of polish is part of the joke, and in many areas it works for me, but there were some parts where the lack of polish didn't quite work for me:

-In the tutorial, when it says "You may choose what a character says next..." and then it goes to the next part, it does something weird and looks like it's doing some text, but then jitters and jumps to some other text. I think something weird is going on here.
-The very end of the first part of the tutorial (when it's telling you how to jump on the Xbox and Playstation) is missing a <NOD.
-When you talk to Curly in the house and choose "Breakfast" instead of combine, the message box is missing a <CLR and a <NOD.
-"Are you the kid who hides under the tables." - Has an extra line break show up in the text box. This is because of the message box by default starting a new line after 35 characters.
-"Which breakfast do you want?" - Line by Prof. Booster, the question mark gets cut off
-When you have the choice to "Roast him" or "Fight him," you're missing a <CLR, at least for if you choose to roast him. Same thing for if you choose a rap battle
-I think I jumped off the edge of the map at Bredbear's. I jumped onto the roof, then got a running head start, and jumped off the right edge, and off the edge of the map, and had to reset because the game didn't notice that I died.
Overall, fun mod, it entertained me for a good 30 minutes.

HaydenStudios said:
At first I was a bit frustrated that I wasn't given the chance to save before fighting those robots
Click to expand...

The game autosaves when you enter Bredbear's
Also I might fix most of those those bugs in an update today, then after that the next update tomorrow will fix some more flags.
Last edited: May 1, 2021
Sunny x Aubrey (OMORI) Supremacy
May 1, 2021 at 6:19 PM

The game autosaves when you enter Bredbear's
Click to expand...

For some reason that feature wasn't working when I played it.

HaydenStudios said:
For some reason that feature wasn't working when I played it.
Click to expand...

Serri said:
You may need to use <FL+0431 for the autosave, for the case of there being save points, but the player hasn't interacted with any of them.
Click to expand...

"Life begins and ends with Nu."
Join Date: Dec 31, 2011
Location: United States
Posts: 2237
Age: 25
Oh hey, forgot about this mod. Yep, sometimes plans can change along the way. Good luck in your quest to come up with a new plot.

"This is the greatest handgun ever made! You have to ask yourself, do I feel lucky?"
Join Date: Feb 4, 2015
Location: Mimiga Island
Posts: 102
Age: 17
I've already sent this to MCSMfan through Discord DM but I felt I'd post it in this thread here as well, a few days ago I recorded a video playing through the first two episodes of this mod series. Despite some mistakes and weirdness I felt it was somewhat entertaining and the errors were understandable since it doesn't seem the creator had much modding experience prior to this mod
(also this is my first time properly editing a video, or doing any gameplay style video aside from crappy minecraft recordings from when i was 10 lol)

You do realize that people can still post reviews on this.

"This is the greatest handgun ever made! You have to ask yourself, do I feel lucky?"
Join Date: Oct 15, 2017
Location:
Posts: 96
Age: 16
November Update:
Cave Story Season 2 Episode 4 will be released in december because I basically got distracted by playing Minecraft and other things (I have been playing some Oxygen Not Included). Over time I decided after this mod I should make another mod series which will be the continuation something nostalgic (its still in the planning phase.), that being said, I had an episode 4 build but its just the Ballos fight reskinned, so the final version of Episode 4 would just be a chase sequence with a few silly puzzles, choices, memes and skits, I plan on adding a easter egg for the planned series (dont count on it.)
Sunny x Aubrey (OMORI) Supremacy
Nov 10, 2021 at 3:23 AM

"Life begins and ends with Nu."
Join Date: Dec 31, 2011
Location: United States
Posts: 2237
Age: 25
Oh yeah, I didn't end up playing the episode 3 release. I'm probably gonna go ahead and wait until the episode 4 release, since I still have Curly's Weird Crusade on my to-do list of mods to play. Good luck in your implementation of those silly puzzles, choices, memes, and skits in episode 4.

"This is the greatest handgun ever made! You have to ask yourself, do I feel lucky?"
Join Date: Oct 15, 2017
Location:
Posts: 96
Age: 16
Progress is Very slow, as I am starting to lose interest in the mod and it might be delayed to Janurary, (mainly because im working on a GCMV in the mod which features backgrounds.

Here is a teaser 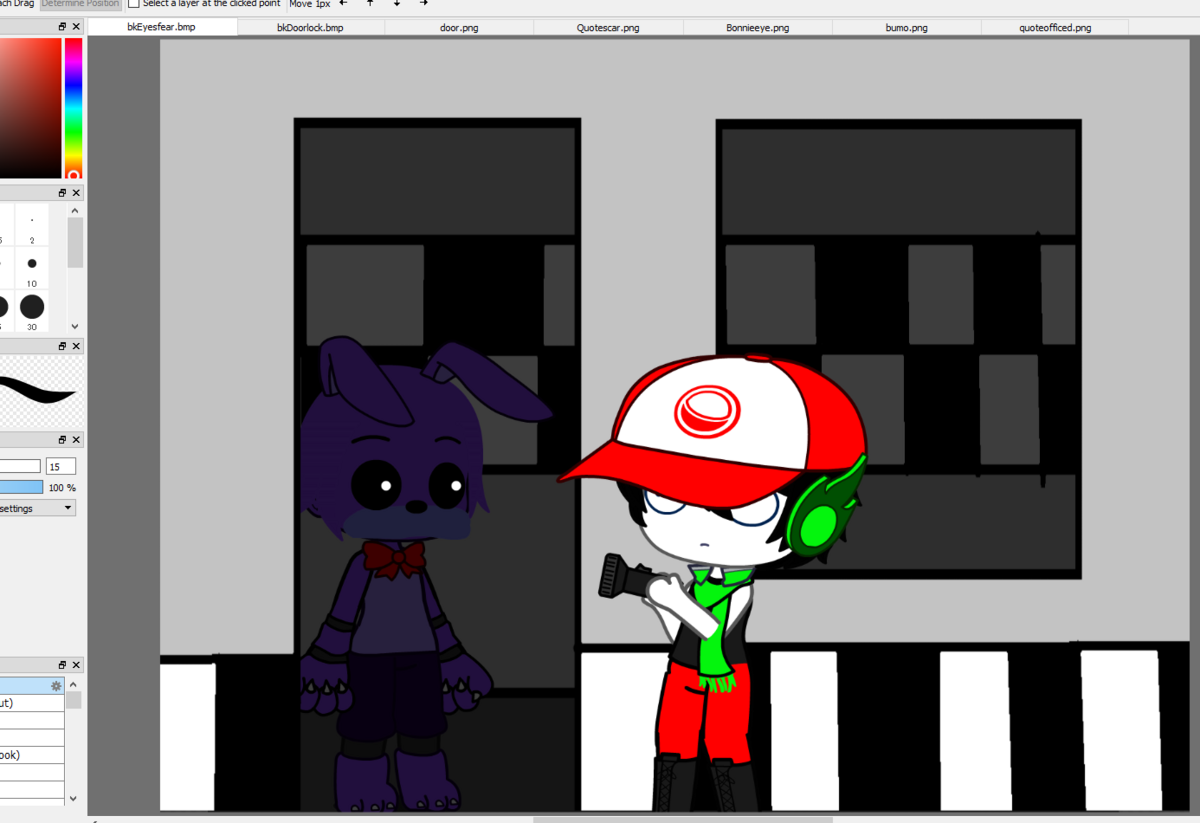