"This is the greatest handgun ever made! You have to ask yourself, do I feel lucky?"
Join Date: Jul 27, 2017
Location: Closed Space
Posts: 107
As every major world power waged war on one another for control over the Island's wondrous oddities and powerful artifacts, machines proved to be far more capable of capturing territory and fending off enemy combatants than man ever would on the Island, resulting in revolutionary advancements in military robotics. Races of developing the newest and deadliest models consumed participating countries, creating steel warriors incomparable to human fighters.


This, however, is not the story of one of those cutting-edge warriors. Instead, you play as Bluebot No. 52, a cheaply made and mass-produced scout robot sent to the Island years prior to World War III, whose only concern is documenting everything he sees...


Demo - https://www.dropbox.com/s/1ucfo0mjgzh7mg1/Bluebot Requisition.zip?dl=0
I apologize if this demo's a bit short, this is the first actual mod I've ever seriously worked on (and I also apologize if playing has made that abundantly apparent), so I don't have a good frame of reference for how long these should usually be.
Jun 25, 2021 at 6:20 AM


- the stuff like the window text being changed & the custom title/textbox graphics are a cool touch, they're well done
- a slight bit of text is cut off when inspecting the first robot right where you start
- i am running on less sleep than usual so it could just be me being bad at the game, but the first jump with the spikes is really annoying and i keep dying to it, since you have to avoid the critters and you don't have enough HP to survive the spikes. i would recommend either more starting health/life capsule before the jump, repositioning the spikes or the positions/amount of critters.
- aw man the soldier blew up :[
- hiko island, huh? does that have any particular meaning to it?
- as someone who appreciates copious amount of interesting inspect text for random objects, this mod is scratching that itch so far - i like how things are being hinted at
- using the intro for quiet as a sort of 'item get' chime is clever, i'm glad i'm not the only one who's thought of that
- a save point/health station (or even just making the beds sleep-able) before the rabid mimiga show up would be appreciated. now i have to do this stupid jump again!
- the chase sequence is clever and well done in terms of TSC, but in terms of difficulty (and no save/health refill beforehand) it's just... not fun, given the extremely low HP and lack of weapon. if it was just the mimiga, it'd be fine, but the critters being there slam dunks it into 'not really fun' territory
- SAVE POINT
- the gun sprite is cool
- ahhh, more annoying spike jumps...
- the door from fortified entry > ancient hills doesn't open (as in, the door doesn't disappear)
- aw man the soldier didn't blow up :[
- my complaint about low HP shows up again - curly AI has a decent chunk of HP, and attacks that aren't easily avoidable especially in an enclosed space, this is potentially a really frustrating fight. even playing the original game in hardmode, you have a variety of weapons by that point.
- i like the lore and worldbuilding being revealed through transmissions, they're also paced nicely - not long/frequent enough to be frustrating and written well, this is probably my favourite part
- 'the excavation crew hauled out a weird artefact' uh oh!
- egg corridor/grasstown tiles mashed together, neat
- ah, that's the end of the demo
overall, this is really impressive - the writing is very interesting and well done, as well as the effort put into custom assets. my main complaint, however, is the difficulty - while the levels are nice to look at, they're just not really enjoyable to play through due to the placement of enemies/spikes, limited amount of health and save points, and i confess i resorted to douktrainer a few times in order to bypass frustrating jumps/enemies. this is all stuff that can be easily fixed, though, and i look forward to seeing where this goes!

"Life begins and ends with Nu."
Join Date: Dec 31, 2011
Location: United States
Posts: 2048
Age: 25
I enjoyed this mod as well. It was a pretty polished mod, both in level design and scripting. The narration and story seems to have had quite a bit of thought put into it. While things were pretty fine-tuned, they were fine-tuned to make the mod very difficult. The rooms were challenging, but fell a little bit too far to that extreme at times, especially given that there was a large stretch of time at the beginning where I had no chance to save or refill my health, and had to make a bunch of tricky jumps, many of which involved getting hit in order to clear a gap. The Mimiga chase scene, for example, was a really cool and exciting concept, but I could never get there with more than 1 HP, and beating that thing without getting hurt was just out of the question, so I hacked the game to boost my health after failing that part a couple times.

Another thing I noticed is that there seems to be some inconsistency between whether narration when examining objects is done with the robot facepic and all caps letters, or with no facepic and normal capitalization. For example, when examining the broken robot at the beginning, it's the robot facepic. When you look at the book shelves, it's regular narration. But then when you examine the robot in that base near the beginning, it's once again the robot facepic with all caps, even though it appears to be narration instead of the robot talking to someone. It keeps jumping back and forth between these two methods of narration with no clear pattern.

Another thing I noticed was that I seemed to get trapped down here, and had to load my save file, unless I'm missing something: 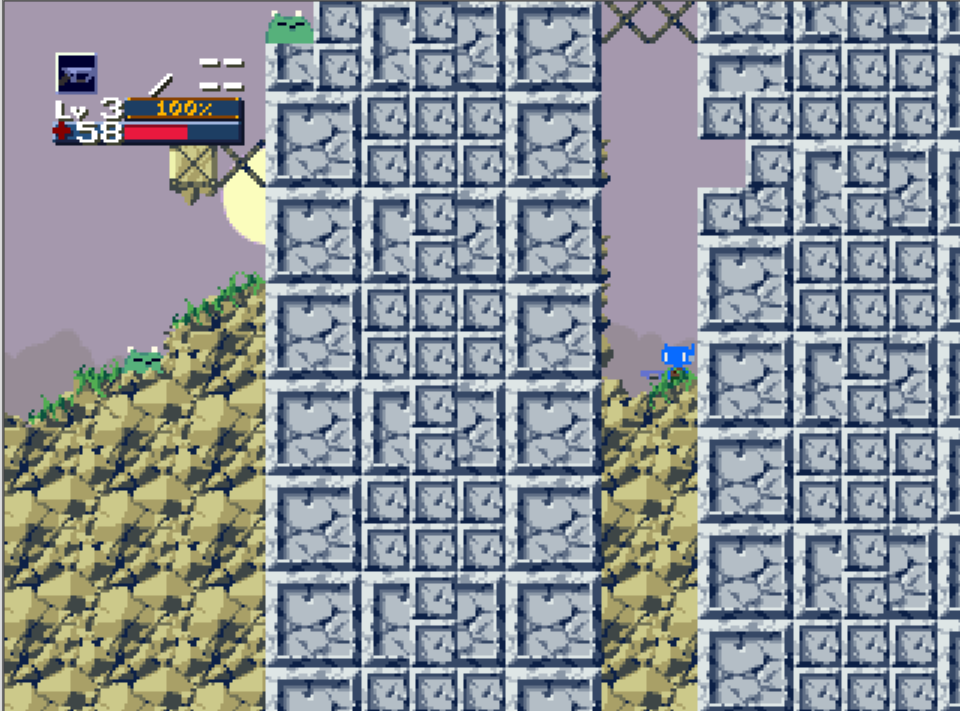